Café Gondrée, the story of the family

It is known as the first liberated house of Western Europe. But do you also know the story of this well-known Café Gondrée on the Pegasus Bridge? 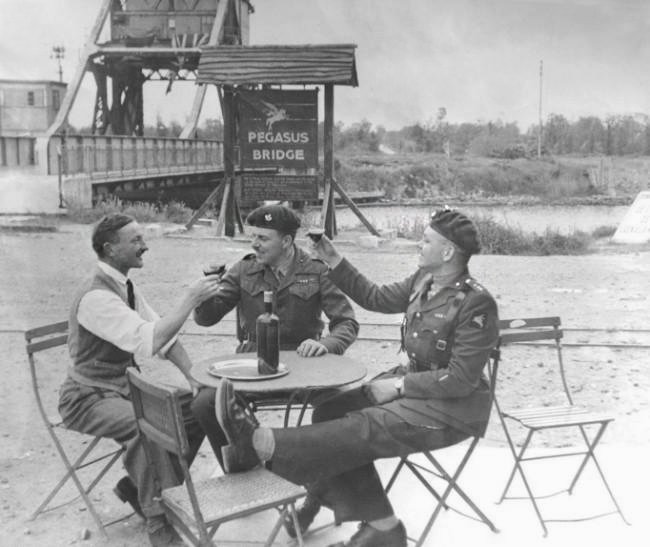 The story of the café Gondrée begins with Georges Gondrée. He was born in 1898 in Trouville sur mer. His parents worked in a construction company. The kind of work that certainly influenced their son. Georges, a cheerful and intelligent man, was educated in Trouville and then embarked on a career in banking. He worked for Lloyds Bank for many years and his many experiences of British finance helped him to become fluent in English.  He also worked for the Casino in Deauville, across the river from Touques. He also often had to work at the Casino, which was part of the same company, in Cannes. It was in Cannes where he met his wife Thérèse.

Thérèse was born in Alsace on August 4, 1904. Her family were farmers and owned a large plot of land. She studied nursing at the famous school in Strasbourg and worked late at the American Hospital in Paris. Her work as a nurse often required her to travel, often to the south of France, including Cannes where she met Georges.

Georges and Thérèse went to live in Bénouville where they owned a small café on the shore along the Bénouville Bridge. During the Invasion, they had three daughters: Georgette, Arlette and the newborn Françoise.

The family certainly did not favour the German occupier. Among other things, they refused to allow their café to serve as a billet for German soldiers. As the war progressed, the more risks and dangerous activities they undertook against the occupier. Thérèse, who grew up in Alsace, knew quite a bit of German. Local residents did not like her accent with German interference but she took care to keep her knowledge of German secret from the occupiers themselves. This often enabled her to analyse conversations of the soldiers and pass on important information to the resistance.

The information gathered by the Gondrée family contributed greatly to the insight of Major Howard and his troops to better assess the defensive positions around the bridge. Among other things, Thérèse was able to pinpoint the exact location of the detonator that was supposed to have detonated the bridge during the attack. Georges was also known to British intelligence and even Major Howard had heard his name mentioned during the planning of the invasion itself.

The importance of the family’s contribution to the success of the British attack can also be seen from an example during early May 1944. When Field Marshal Erwin Rommel came to inspect the bridge, he had given the order to place an anti-tank gun beside the Bénouville Bridge. Within two days Major Howard had been informed that a new structure was being built along the bridge and within a week Georges’ observation had helped to confirm both its function and exact location.

At 00h16 on June 6, the first glider landed next to the Bénouville Bridge. The Family was asleep but they were soon awoken by the sound of explosions and gunfire. Georges crawled to the window to see what was happening, an understandable reaction but also a dangerous one since a gunfight was going on outside in the darkness of the night. He soon realised that this was not a very smart move as he lifted his head over the window sill. His protruding head was quickly spotted by Lieutenant Richard Smith who immediately fired a few salvos with his Stengun at the blurred figure. Fortunately, his salvos missed their target and Georges remained unharmed. It was clear to George that he should not do anything and he decided to go to the basement with his family.

Soon it began to calm down outside. Thérèse urged Georges to go and have a look. He later said: “I am not a brave man, and I did not want to be killed so I went upstairs with a lot of fear and crawled to the nearest window. I could hear voices but I could not understand them clearly so I opened the window a tiny bit to look. I saw two soldiers sitting in front of the café next to my petrol pump with a dead body between them.”

These soldiers were part of the 7th Parachute Battalion whose objective was to take the west bank of the Caen Canal. One of them asked Georges, in French, if he was a civilian. To which Georges replied that he certainly was but as the soldiers’ French was limited to that one phrase, it was difficult for Georges to find out who they were. Georges returned to his family in the cellar and decided to wait until it was light again.

In the morning the family could hear voices outside again. Georges heard that these voices did not resemble those of the German soldiers at all and even thought he recognised some English words