Winston Churchill, a British statesman who as Prime Minister from 1940-1945 resisted Hitler and thus played a decisive role in the Allied victory. 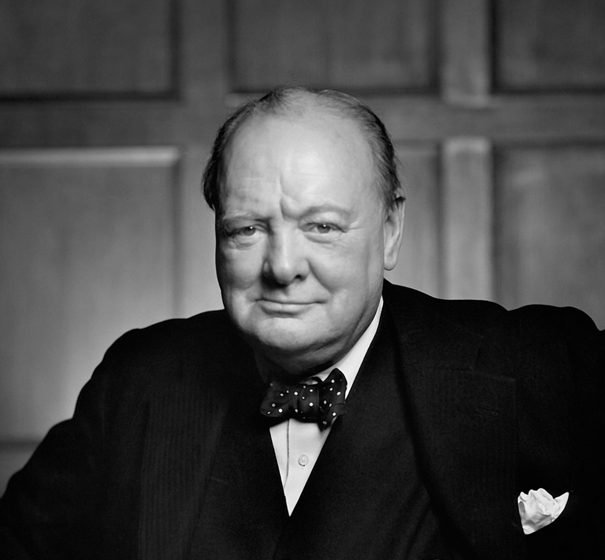 A portrait of Winston Churchill by Yousuf Karsh, taken in 1941 during the early years of the Second World War. This photo is one of the most reproduced photos of all time.
Publication date
29 July 2017
Share this page
Related tags
BritChurchillLeonard Spencer-ChurchillPoliticsprime ministerVictoryWinston
Print page
Save as bookmark

Winston Churchill was the British statesman who resisted Hitler as Prime Minister from 1940 to 1945 and thus played a decisive role in his downfall and the Allied victory. He succeeded in getting the British war effort up to standard and in getting the United States to support him.

Churchill is one of the most famous statesmen of the 20th century. Before becoming Prime Minister at 64, he had already had a long and unstable career, during which he changed political parties twice. He was first elected to the House of Commons in 1901 and appointed Home Secretary in 1910. As Minister of the Navy and as Minister of Munitions he was involved in the First World War. Later, he also became Minister of Finance. He was also a prolific and successful writer and was awarded the Nobel Prize in Literature in 1953 for his history of the Second World War. He was one of the few Europeans to have an honorary American citizenship.

Winston Churchill was born at Blenheim Palace in Woodstock, Oxfordshire. He was a descendant of the English general John Churchill, 1st Duke of Marlborough, who received Blenheim Palace as a reward for victory at the Battle of Blenheim in 1704. Churchill’s father was Lord Randolph Henry Spencer-Churchill, the third son of the seventh Duke of Marlborough, who was Chancellor of the Exchequer in 1886. Like his father, Churchill used only ‘Churchill’ as his surname, although he was officially registered as ‘Spencer-Churchill’. His mother was Jennie Jerome, the daughter of American millionaire Leonard Jerome. 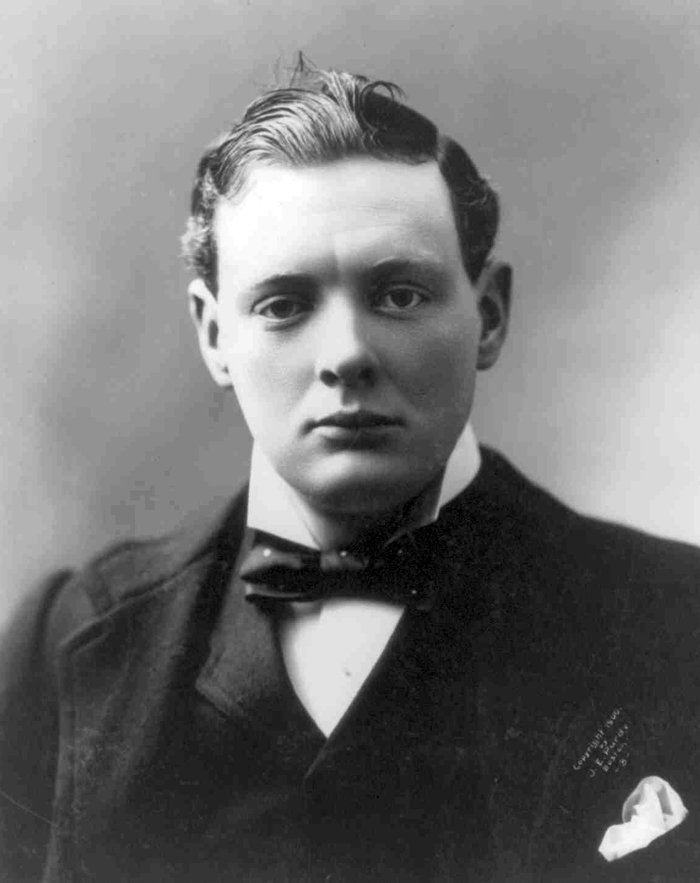 Winston Churchill as a Politician

In 1910, Winston Churchill was appointed Home Secretary and made a request to sterilise about 100,000 “mentally degenerate” people and put a few thousand others to work in state camps to be set up. This was “to save the English race from these reproducing inferiors.” The Act passed in 1913 removed the possibility of sterilisation. As Home Secretary, Churchill opposed women’s suffrage, which even led to a suffragette physically attacking him.

In 1911 he was appointed First Lord of the Admiralty. He would remain in this position until the First World War. During this time, as a member of the Committee of Imperial Defence, he was involved in preparing the British armed forces for the impending war in Europe, along with the Foreign Secretary Edward Grey, among others. Winston Churchill and the First Sea Lord, Prince Louis of Battenberg, ensured that the huge British fleet did not disintegrate after exercises in the summer of 1914 and could therefore be immediately deployed at the outbreak of war. He played an important role in the development of the first British tank, the Mark I.

In World War I, Churchill as Secretary of the Navy was very ambitious in attacking the Central Powers. In 1915, for example, he was partly responsible for the disastrous Gallipoli landings at the Dardanelles, which were intended to capture the capital of Germany’s Ottoman ally and open up a supply route to ally Russia. On the British and French sides no less than 220,000 were killed, wounded and missing (for the Ottoman Empire the figure was about 250,000). This earned him the nickname “Butcher of Gallipoli” from his critics. He took much of the responsibility by resigning as Minister of the Navy, although the main culprits for the failure were the local commanders. When an all-party government was formed soon after, Winston Churchill became Chancellor of the Duchy of Lancaster, a minor post. Churchill felt out of place there and soon resigned from the government and joined the army. He served on the Western Front as commander of a Scottish battalion at Ploegsteert, but remained a member of the House of Commons.

Winston Churchill inspects a group of Royal Navy Cadets during their training in 1912.

In 1917, he was appointed Minister of Munitions. When World War I ended, he was also appointed Minister of War and Minister of Aviation. He proposed in 1919 to use poison gas “as an experiment against recalcitrant Arabs.” In his view, the use of chemical weapons was merely “the application of Western science to modern warfare.” It was therefore a relatively new weapon, which had been used with varying degrees of success by the Germans, the French and the British during the First World War. He was also in favour of intervening in the Russian Revolution. He saw it as his personal quest to “strangle Bolshevism at birth”. He was subsequently appointed Minister of Colonies and was a signatory to the Anglo-Irish Treaty of 1921, which granted independence to the Irish Republic.

In October 1922 Churchill had his appendix removed. When he came round, the government had fallen and elections had been called. In these elections he lost his seat for the Scottish Dundee constituency. In 1924, with Conservative support, he stood for Epping, north of London, and was elected. Churchill was now appointed Chancellor of the Exchequer. In 1925 he rejoined the Conservative Party.

In the 1929 elections the Conservatives were defeated. Due to internal disagreements, Churchill did not become leader of the party. When the first Labour Prime Minister Ramsay MacDonald formed a coalition government, there was no place for Churchill, who then continued to devote his time to writing. After 1933, he was one of the few in his country who could and would see that the rise of Nazi Germany would lead to another war and who advocated a stronger army. However, the massacres of the Great War were still so fresh in many people’s minds that they did not want to face reality. Churchill was a fierce opponent of Prime Minister Neville Chamberlain’s policy of appeasement. His position as a voice in the wilderness was further exacerbated when he sided with Edward VIII in his dramatic choice to marry the divorced woman Wallis Simpson, ultimately costing Edward the throne.

In 1937, Churchill wrote the controversial article How The Jews Can Combat Persecution, which was banned for publication only 70 years later. In it, he blamed the Jews for, among other things, not wanting to integrate, charging too much interest for loans (using the term “Hebrew leech”) and thereby more or less fomenting their own persecution. His thoughts in this regard were similar to those of the British fascist party BUF, Oswald Mosley’s British Union of Fascists, which had been founded a year earlier and led anti-Semitic riots in London’s Cable Street at the time. Nevertheless, Churchill was not an extreme anti-Semite and corresponded frequently with Jewish and Zionist figures. During the period when the German ambassador Joachim von Ribbentrop was in London, there was an incident at a dinner when Churchill remarked that “it is stupid to judge people on the basis of coincidences such as birth”.

The apparent success and popularity of Chamberlain’s appeasement policy pushed Churchill to the political margins. Probably partly because of this, he went through a period of depression. On October 1, 1938, the day after Chamberlain’s triumphant return from Berlin, waving the now infamous piece of paper and promising “peace with honour, peace for our time”, Churchill was visited by Guy Burgess – who later turned out to be a mole for the Soviet Union and a member of the Cambridge Five. Burgess – himself a great opponent of Hitler and fascism in general – seemed to have regained Churchill’s will to return to politics in order to resist Hitler. Churchill gave Burgess a signed copy of a book of his speeches and the promise that Burgess could always turn to Churchill for help. 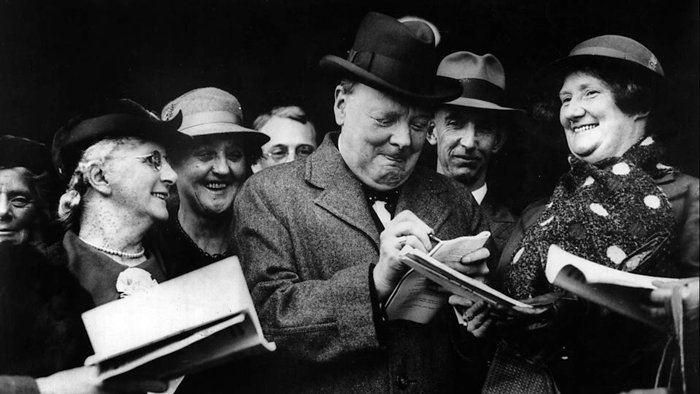 When war broke out on September 1, 1939, which Chamberlain had wanted to prevent, he was appointed First Lord of the Admiralty. When Chamberlain resigned as Prime Minister after disastrous defeats in Norway on May 10, 1940, when the Germans began their advance on the Western Front, he was succeeded by Churchill. His friend, confidant and newspaper magnate Max Aitken, was appointed supervisor of aircraft production.

On October 30, 1939, Winston Churchill sailed with two admirals on the battleship HMS Nelson near the Orkney Islands, accompanied by HMS Rodney and HMS Hood and ten destroyers. Captain Wilhelm Zahn of the German submarine U-56 launched three underwater torpedoes that struck the hull of HMS Nelson, but they failed to explode due to faulty magnetic detonators. Captain Zahn ducked and withdrew dejectedly into his cabin and only later sent a message to Admiral Karl Dönitz, who could have sent another submarine at short notice.

Shortly before the Battle of Britain, he spoke these legendary words to the British people:

Winston Churchill established the Special Operations Executive (SOE), which conducted operations in enemy territory. This SOE fell under the responsibility of the War Office, which was headed by Hugh Dalton. Commands were also established. Most Special Forces in the world are organised along the lines of these commands.

Some of Churchill’s military actions were later called controversial. During the Great Bengal Famine of 1943, Churchill could at best be called indifferent and it was later said that he may have been complicit (in doing nothing). In the British East Indies, however, the threat from Japanese troops, after they had taken British Burma, was growing. In 1943, Churchill decided to firebomb Hamburg, killing at least 48,000 civilians. He then hired British scientists to “change the weather forecast” for a larger German city, referring to the firestorm caused by the bombing of Hamburg. The bombing of Dresden in February 1945 was also later controversial. Dresden was not a military target and tens of thousands of civilians died. Churchill later wrote in his memoirs that he was under the illusion that Dresden was “a communications centre for the Eastern Front”. 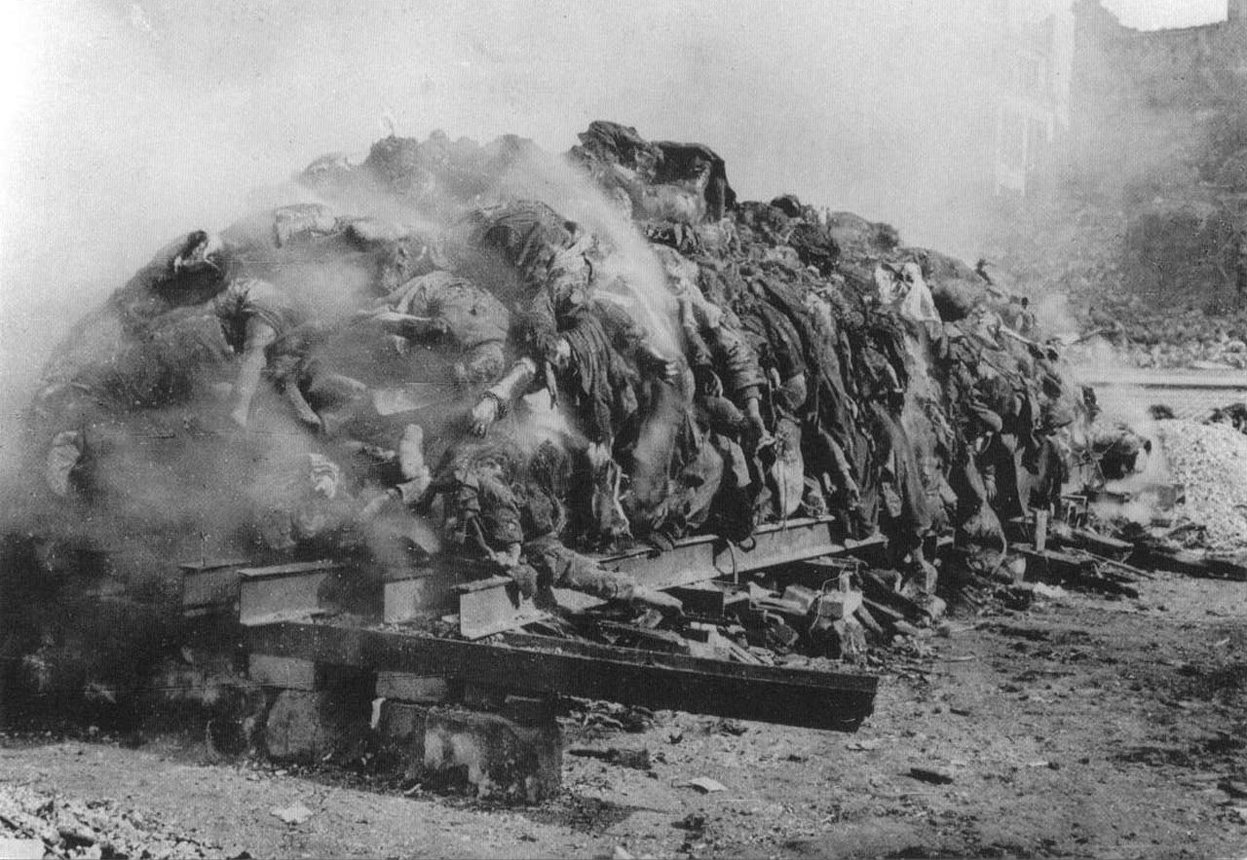 A pile of charred bridges after the bombing of the German city of Dresden.

Winston Churchill was also one of the driving forces behind the treaties that changed the borders of the European and Asian countries before the Second World War. The border between North Korea and South Korea was proposed at the Yalta Conference, as was the removal of Japanese troops from that area. Proposals for European borders were not made until 1943 by Roosevelt and Churchill. The final settlement was made at Potsdam by Churchill, Stalin and Truman.

Part of the final settlement was the transfer of Germans from the area concerned. The exact numbers of population movements across the German-Polish and Polish-Russian borders were later difficult to determine, but it was mainly millions of Germans who were forcibly expelled from their former Ostgebiete. Churchill and his Foreign Minister Anthony Eden strongly opposed this, for they foresaw that withdrawing the eastern grain areas from Germany would lead to famine in that country in no time at all. However, the matter was left until after the British elections of July 25, which removed Churchill from the stage at the Potsdam Conference. The Russians later continued to drive out the German population across the Oder and the eastern Neisse, thus presenting the British and the Americans with an increasingly fait accompli.