D-day is an interesting subject for movies. An accessible way to remind us of it of course. We compiled the top ten D-day movies. 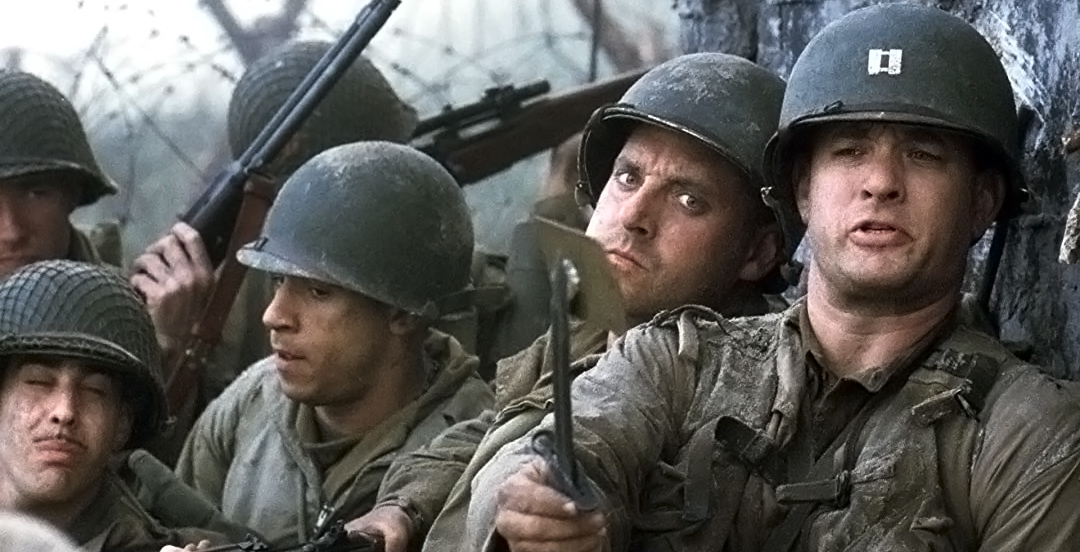 This top 10 of these D-day movies has been compiled by D-day Info itself in combination with the votes of our followers. This ranking is of course subjective and therefore rather indicative. 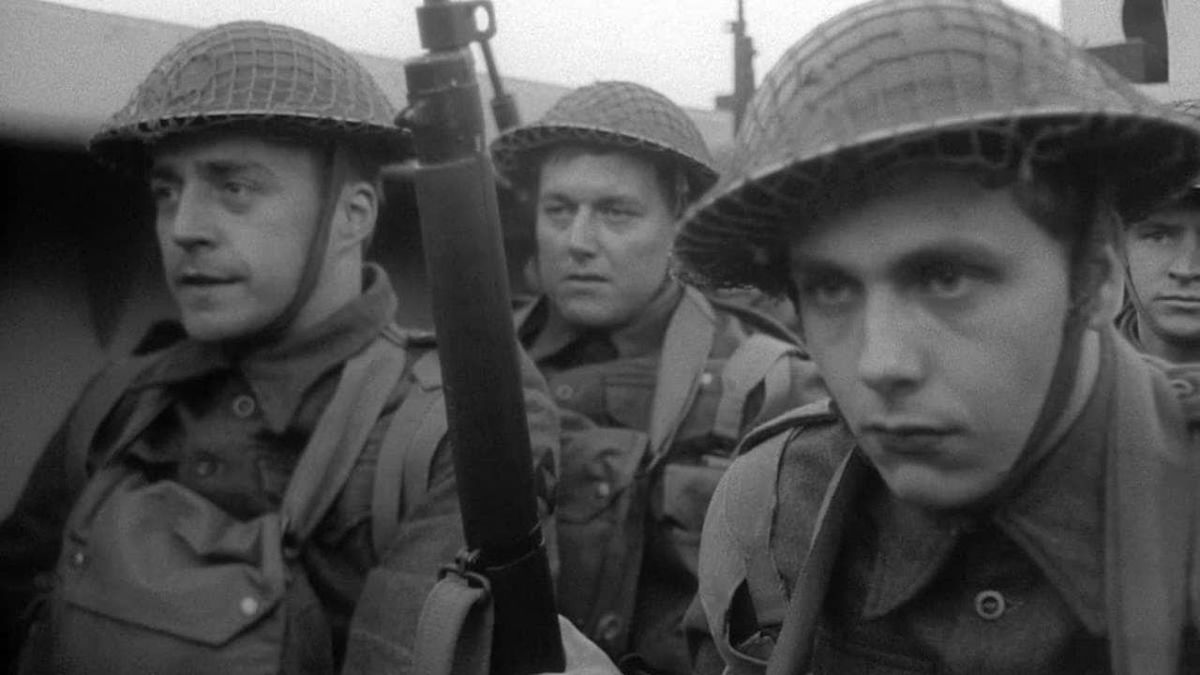 Overlord combines archive D-day movies with new material to tell the story of Thomas. Thomas is a young British soldier who is trained to go to Normandy during the Second World War. During this period, Thomas has dreams and visions about his possible future and eventual death. 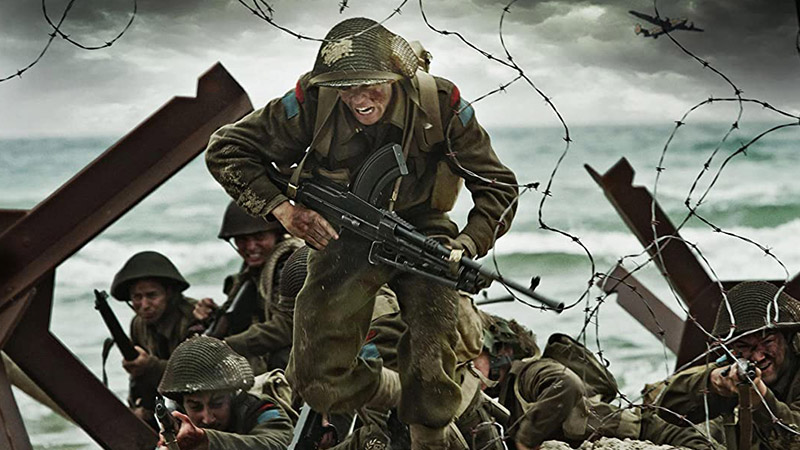 Tim Wolochatiuk’s film Storming Juno is a Canadian documentary that tells the story of the soldiers who landed on Juno Beach on June 6, 1944.

Storming Juno reminds viewers of the sacrifice of a nation that fought alongside the Allies and of Canada’s vital involvement in the military effort in the Battle of Normandy.

Storming Juno is inspired by the stories of Canadian veterans and features three characters: Corporal Dan Hartigan, dropped over Normandy on the night of June 5-6, 1944, Lieutenant Bill Grayson Regiment Regina Rifles, disembarked with his men on the beach, and Sergeant Leo Gariepy, tank commander and also landed on Juno. This staging of true stories allows one to empathise with the characters and experience this important event of World War II from the crossing of the Channel to the beginning of the Battle of Normandy. 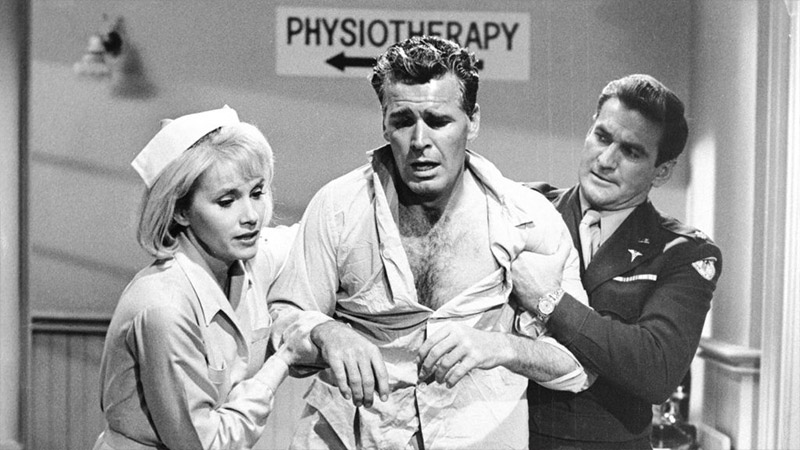 The Germans kidnap an American major and try to convince him that World War II is over, so they can get details about the Allied invasion of Europe out of him.

World War II is still in full swing, and Pike is duped into an elaborate scheme set up by Major Walter Gerber (Rod Taylor), a German intelligence agent. Gerber attempts to trick a drugged and impressionable Pike into telling him everything he knows, as the wounded soldier lies in a Bavarian military hospital after being captured. Will Pike be able to see through the cracks in Gerber’s facade before he spills the beans that could mean death and defeat for the American soldiers? 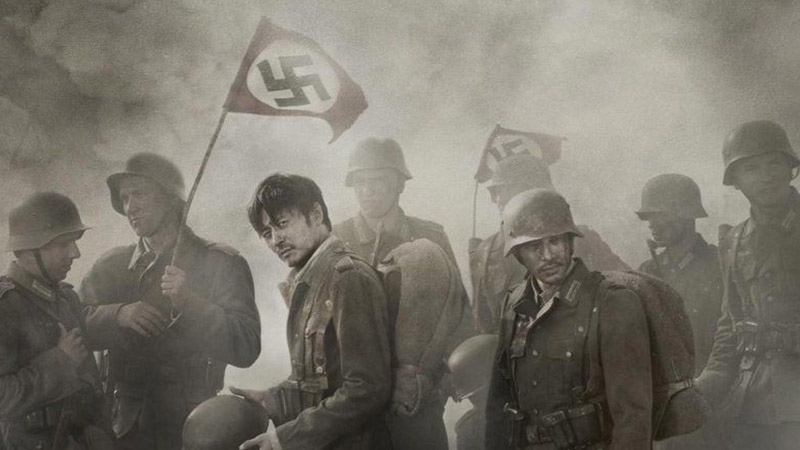 Perhaps one of the more unfamiliar D-day films to us but it’s definitely worth a look.

After emerging as bitter rivals and enemies as young marathon runners, Korean native Kim Jun-shik and Japanese aristocrat Tatsuo Hasegawa both find themselves in the Japanese army, fighting the Chinese and Soviets in a bloody battle. Jun-shik is there under duress, while Tatsuo is a colonel. After both are captured by the Soviets, their mutual hatred and distrust boils over into a violence that is only stopped by the ongoing horror of war. Forced to fight for the Soviets, the two end up relying on each other to survive, leading them to Germany, where they are in turn separated and forced to fight for the Nazis. They meet again in Normandy. 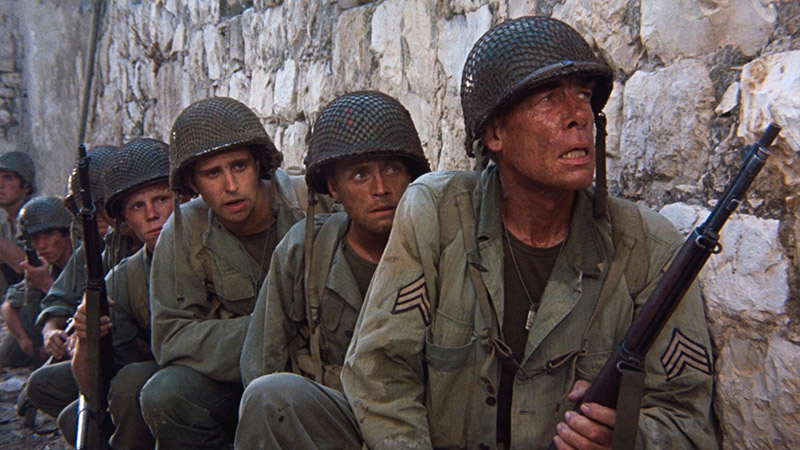 The Big Red One follows the First Infantry Division from Africa to Europe during the years 1942 to 1945. Lee Marvin portrays the division’s sergeant; he is certainly strong and experienced, but he takes on his job with cool professionalism rather than Hollywood bravado. Based on Fuller’s own experiences, the film is a loosely constructed series of anecdotes. There is an insane asylum that is bombed while the prisoners applaud, and a climactic vignette in which a very young concentration camp internee dies while a friendly soldier plays with the boy. 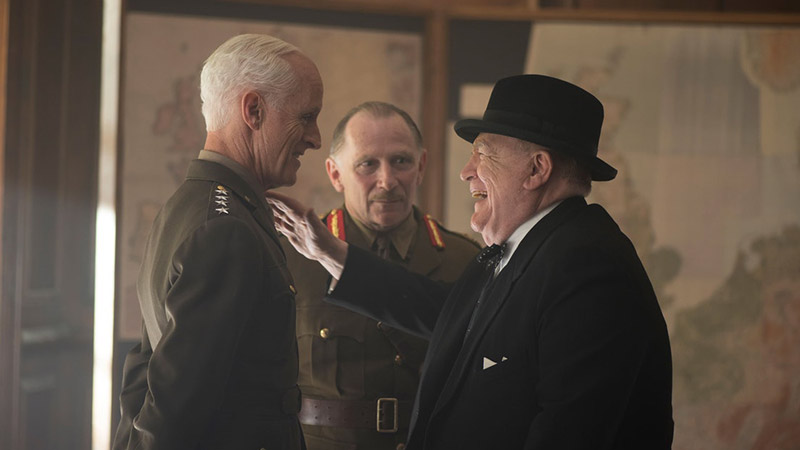 Tensions mount for British Prime Minister Winston Churchill (Brian Cox) in the days leading up to the infamous Allied D-Day landings in Normandy, France in June 1944. Fearful of repeating his deadly World War I mistakes at the Battle of Gallipoli, exhausted by years of war, plagued by depression and obsessed with his historical fate, Churchill is reluctant to embark on the large-scale campaign on which the entire war effort depends. Faced with his allied political opponents, American General Dwight D. Eisenhower (John Slattery) and British Field Marshal Bernard Law Montgomery (Julian Wadham), the troubled Churchill receives support and devotion from his wife, the brilliant and unflappable Clementine Churchill (Miranda Richardson). With her strength and acumen, “Clemmie” stops Winston’s physical, mental and spiritual collapse and inspires him to greatness. 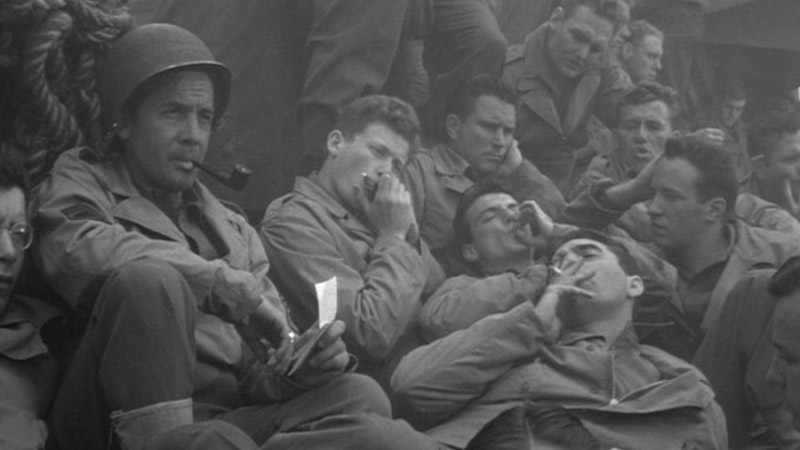 Filmed with the full cooperation of the US Army, this is a no-nonsense D-day film set during the 1944 invasion of Europe. Led by Captain Hale (David Brian), a small group of infantrymen march through Normandy. The warlike foot soldiers resent the presence of Lieutenant Joe Mallory (John Agar), but he soon proves his worth to the platoon. The supporting characters are the usual amalgamation of “types”, although for the most part the usual clichés are avoided. The only woman in the cast is Suzanne Dalbert, who plays a Norman villager with whom the GIs briefly frolic. At the start of Breakthrough, several scenes of actual combat training are shown in dramatised sequences. 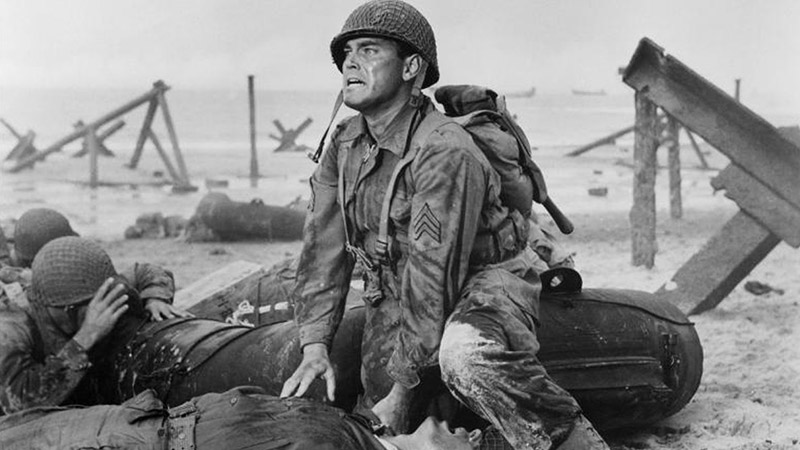 The Longest Day is an absolute classic among these D-day movies. The invasion was personally orchestrated by Darryl F. Zanuck. Wherever possible, the original locations were used and an international all-star cast impersonates the people involved, from high-ranking officials to ordinary GIs. Each actor speaks in his or her native language with subtitles translated.

Scenes include the Allied parachute jumps at Ste. Mere Englise, where the paratroopers were mowed down by the Germans; a scene in which the German and Allied troops unwittingly march side by side in the dark of night; and a spectacular three-minute overhead shot of the troops fighting and dying in the streets of Ouistreham. 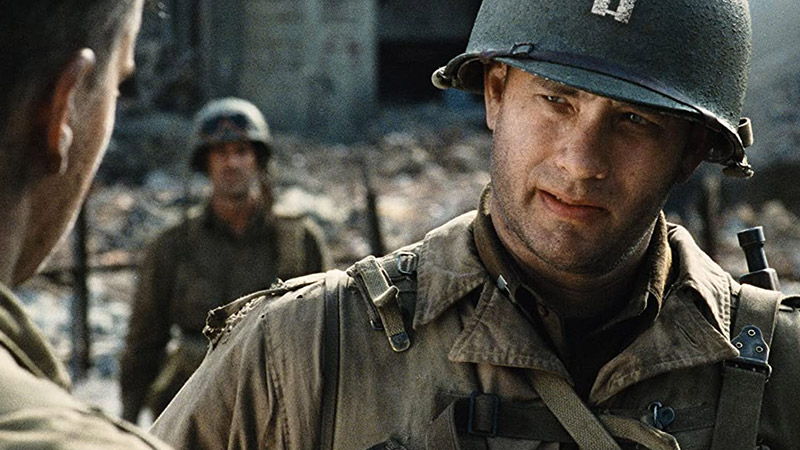 Steven Spielberg directed this powerful, realistic recreation of the D-day invasion of World War II and its immediate aftermath. The story begins with a prologue in which a veteran takes his family to the American cemetery in Normandy and has a flashback with Capt. John Miller (Tom Hanks) and GI’s in a landing craft approaching Omaha Beach to face the devastating German artillery fire. This massacre of American soldiers is depicted in a riveting, unforgettable 24-minute scene.

Miller’s men slowly advance to finally take a bunker. On the beach, which is littered with bodies, the name “Ryan” is stenciled on someone’s backpack. The Chief of Army Staff, George C. Marshall (Harve Presnell), learning that three Ryan brothers from the same family have been killed in one week, asks that the surviving brother, Pvt. James Ryan (Matt Damon), be tracked down and brought back to the United States. Captain Miller is given the assignment and he chooses a translator, Cpl. Upham (Jeremy Davis), skilled in language but not in combat, to join his team of right-hand man Sgt. Horvath (Tom Sizemore), plus soldiers Mellish (Adam Goldberg), Medic Wade (Giovanni Ribisi), cynical Reiben (Edward Burns) from Brooklyn, Italian-American Caparzo (Vin Diesel), and religious Southerner Jackson (Barry Pepper), a sniper who calls on the Lord while he has his target in his sights.

Having previously experienced action in Italy and North Africa, the tightly-knit team travels through areas still packed with Nazis. After losing Caparzo in a skirmish near a bombed-out village, some in the group begin to question the logic of losing several lives to save a single soldier…

With no less than 5 Oscars and impressive opening scene, Saving Private Ryan is one of the best D-day movies of all time. 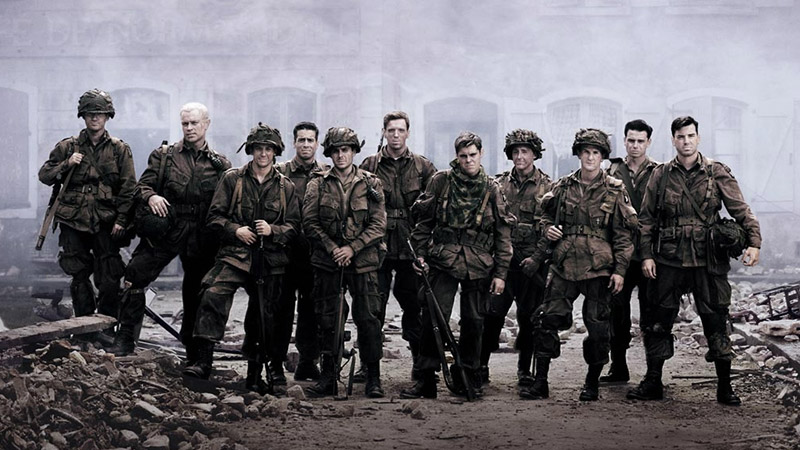 And of course our winner, Band of Brothers. It may not officially be a film, but we can’t ignore this great series. Our followers unanimously agreed that this series should be at number 1.

Band of Brothers is a ten-part television series from 2001 about the final months of the Second World War. It is a co-production by Steven Spielberg and Tom Hanks, showing the role of Easy Company of the 506th Parachute Infantry Regiment, US 101st Airborne Division, in the war. The series begins with training in America prior to the Normandy landings and ends in Adolf Hitler’s “Eagle’s Nest” at the end of the war. ‘Band of Brothers’ is based on the book of the same name by Stephen Ambrose.

Thanks to Band of Brothers, the interest in the Second World War has been rekindled in many people.

Summary of our top 10 D-day movies:

Hugo van Kuyck had a great share in the precise maps of the beaches on which the Allies landed during D-day in 1944.
07 May 2020