By the time the Canadians landed with two brigades in the vanguard on either side of the Seulles Estuary and stormed the dunes, the tide had made Juno Beach only a hundred yards wide at its narrowest part and the battle on the flanking beaches was already one to two hours old. The Canadians did not want to be left behind.

The Canadian 7th Brigade, with the Royal Winnipeg Regiment and the Regina Rifles in the vanguard, landed on the right flank to the west of the Seulles, followed a few minutes later by the Canadian 8th Brigade. They were supported by eight, maybe ten, DD tanks, manned by Canadian 1st Hussars. The tanks had gone into the water 800 metres off the coast. The sea was choppy, they were in constant danger of sinking, and they had to find their way through a tangled web of obstacles that rose up out of the water like the stumps of a petrified forest.

On the left flank, the Queen’s Own Regiment of Canada and the North Shore Regiment, without armoured vehicles, formed the vanguard of the Canadian 8th Regiment; they dashed towards the dunes and the enemy’s heavy machine guns inflicted heavy losses on the Queen’s Own in the 30 seconds it took them to reach the protection of the beach wall. The landing craft, which brought in the engineer armoured vehicles, were still struggling with the heavy seas and obstacles and the DD tanks were put ashore on dry land when the spearhead infantry were well under way and already pushing the enemy out of Courselles and Bernières. When the Régiment de la Chaudière landed fifteen minutes later, hardly a shot was fired. 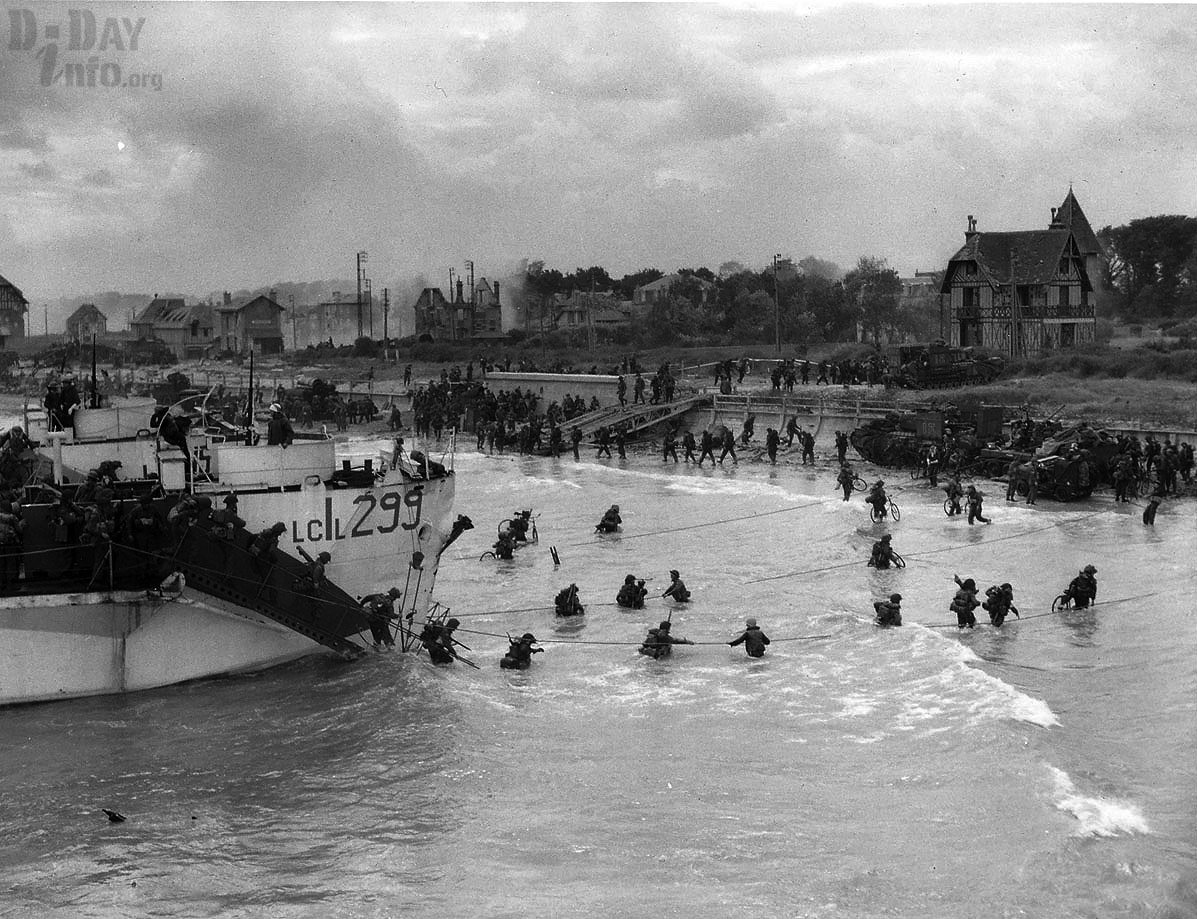 Troops land from LCI L 299 on the beaches of Bernières - Juno Beach.

The Canadian battalions approached Juno Beach in rough seas and strong winds, which drove the boats quite a distance up the beach. The dangerous cliffs of that narrow coastal strip forced the landing craft to wait for high tide and when the tide finally came in, the big boats had to hope that the waves would carry them over most of the obstacles, while the smaller boats had to try to find a way to the beach through the dangerous obstacles. At one point, 20 of the 24 landing boats flew into the air, and as bits and pieces of their boats fell from the sky all around them, the men who had been in them tried to reach the beach as quickly as possible. According to the reports, ‘pieces of the wrecks were thrown up a hundred metres into the air and some men trying to take cover behind a breakwater were riddled with splinters’.

In the strong wind and fast rising tide that turned the surf into a hell of foaming high waves, the storm boats’ helmsmen could only hope and pray. The first three boats, which were on the left flank of the Canadians towards Juno Beach, flew in the air, but all but two of the men in them reached the beach and joined in the fight.

A Chaos on Juno Beach

There were many brave men in the landing boats that sailed to the beach from Sword Beach to Utah Beach, men who had to fight fires, shipwrecks and exploding ammunition. One of these men, a certain Jones, saved a wounded man from drowning in a half-flooded boat and amputated both his horribly splintered legs. He was not a doctor, just a sickbay nurse, but he did it. And there were many on the beaches that day like that ‘Jones’, but for none was the struggle as grim as for the men the Canadians brought to the beach at Juno Beach.

The LCOCU (landing craft obstacle clearance units) of the naval demolition teams and beach units did their utmost to bring order to the chaos of mangled obstacle wrecks. Bulldozers not only pushed the wrecks out of the way, but also pushed boats that had run aground on the beach back into the sea to allow them to return to their ships.

By the time the engineer assault armoured vehicles of the 22nd Dragoons and 26th Assault squadron, at the front of the Canadian 7th Brigade, reached the beach, the DD tanks, which had landed with the infantry, had dealt with most of the enemy positions, which were armed with 75 mm guns and with heavy mortars and machine guns, but there was still a fair amount of mortar and automatic fire coming down on the beaches from positions further up the dunes. The flail tanks were urgently required to clear passageways to the beach outlets for the armoured vehicles and cars which were being brought in to the beach and the Petards and AVREs (Assault Vehicle, Royal Engineers) came in behind to ensure that the infantry did not get stuck on the beach.

On the east side of the Seulles the advance was well under way and on both sides of the river the flail tanks had broken open the exits by 09.30, the AVREs had closed the worst of the craters and beach gullies and the sluices on the Seulles had been opened to drain a crater as big as a village pond and twice as deep.

On the left flank, flint tanks and Petards had breached the 3.50 m high anti-tank wall at Bernières; they then gave support to the infantry, which began to attack the enemy bunkers and support points and the fortified houses. Before noon the flak tanks under the command of the Canadian 2nd Armoured Brigade rolled inland.