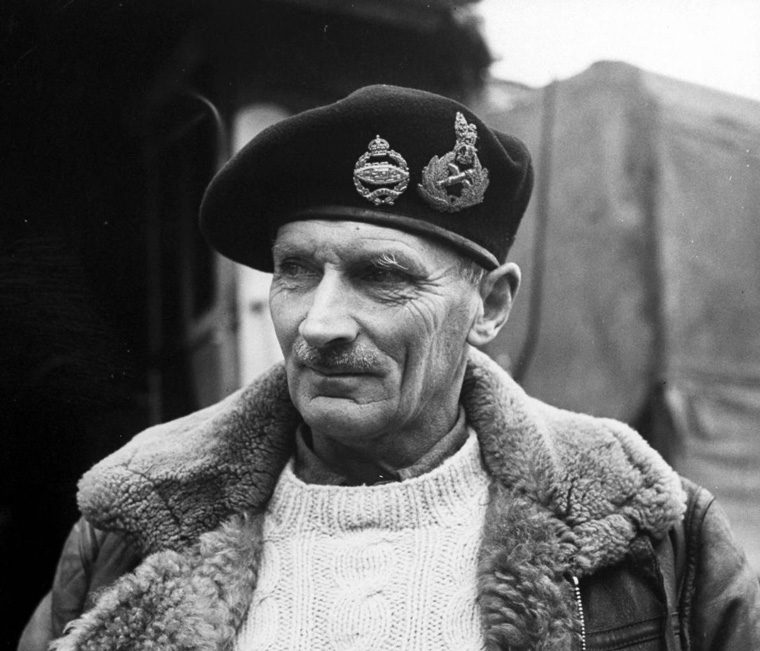 Bernard Montgomery was born into a family of nine children. His father, born in Donegal, was an Irish minister. In 1889 his father became Bishop of Tasmania, which forced the family to move.

In 1901, his father was offered work in London, so the family returned to Montgomery’s birthplace. He trained at the Sandhurst Royal Military Academy. In 1908 he joined the first battalion of the Royal Warwickshire Fusiliers. Here he served until 1913 in the British East Indies.

World War I began in August 1914. In this month, Monty (as everyone called him) was sent with his regiment to France where he took part in the Battle of Mons in the Belgian Hainaut. During this fighting, half of his battalion died. On October 13, 1914, during a counter attack at Meteren, Monty was seriously wounded by a bullet from a German sniper. Everyone expected him to die, but Monty survived. He was awarded the Order of Distinguished Service (DSO) for his outstanding leadership. 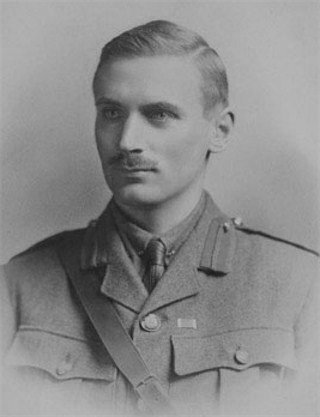 He returned to the Western Front in early 1916 and became a staff officer during the Battle of the Somme in 1916, the Battle of Arras and the Battle of Passchendaele in 1917. During this period he came under the command of General Herbert Plumer where he undertook the training of the Ninth Corps. He prepared the soldiers so that they excelled in their duties and achieved their objectives with a minimum of casualties.

By the end of the war Monty had risen to the rank of General Staff Officer and was temporarily given the rank of Lieutenant Colonel in the British 47th Division.

After the war, Monty served in the British Rhine Army and wrote down his experiences in a series of training manuals and pamphlets.

In late 1920 he became a brigade major in the 17th Infantry Division. This division was stationed in County Cork during the Irish War of Independence. Here he stood out for the great correctness he used in battle, in contrast to his predecessors who did not hesitate to use less conventional means. As the conflict progressed, it became clear to Monty that the conflict could not be won and that only an English withdrawal could bring peace.

In May 1923 Montgomery was posted to the Territorial 49th Division. He returned to the 1st Royal Warwickshire Regiment in 1925 as company commander. In January 1926, after being promoted to Major in 1925, he was appointed Deputy Adjutant General at Staff College, Camberley in the temporary rank of Lieutenant Colonel, a position he held until January 1929 when he attained the rank of Lieutenant Colonel himself.

In 1927 he met Elizabeth Carver, a widow, whom he also married. Their first son was born in August 1928.

In 1931 he became a lieutenant colonel in the First Battalion of the Royal Warwickshire Regiment and was sent successively to Palestine, Egypt and the British East Indies. He was promoted to colonel and then served in the British-Indies Army in Quetta, close to the Afghan border.

Because of his arrogance and stubborn leadership, Monty often clashed with his superiors. These traits continued to play tricks on him later on.

His father died in 1932 and in the autumn of 1937 his great love, Elizabeth, also died. His wife had contracted an infection from an insect bite during a holiday in Burnham-on-Sea. This loss deeply shocked Monty and after the funeral he threw himself fully into his work.

In 1938, he impressed his chief, General Archibald Wavell, with a large-scale exercise of an amphibious operation, after which he was promoted to Major General and given command of the British Eighth Division in Palestine. Here he crushed an Arab uprising, after which he returned to Britain in July 1939 to command the Third British Infantry Division.

When Germany invaded Poland on September 1, 1939, violating its neutrality, Great Britain declared war on Germany. Monty was sent to France as commander of the Third Division of the British Expeditionary Force. During the months in which nothing happened between Germany and Britain, a period known as the ‘phoney war’, Monty continued to train his troops. On May 10, 1940, Germany invaded the Low Countries and Monty found himself face to face with the enemy, including during the Battle of Louvain. Unfortunately for him, the German army had a new attack tactic at its disposal, the Blitzkrieg, which took the expeditionary army by surprise and forced it to retreat in the direction of the North Sea and leave mainland Europe to avoid total destruction by the enemy. This resulted in Operation Dynamo, the evacuation of 330,000 British and French soldiers from Dunkirk to Britain. Monty was outraged by the course of events and swore that he would one day return to defeat the German enemy.

In 1942, he had another opportunity to fight the Germans, this time in North Africa where he became field commander of the British Eighth Army. He quickly transformed it from a listless fighting force, which had so far suffered little but defeat against the German Africa Corps, into an army that went into battle full of pride and courage. The prospect of American landings in Morocco and Algeria, which occurred in November 1942 (Operation Torch), as well as substantial American material support for the British, also helped, of course. On August 31, 1942, the battle for Alam Halfa began, with German Field Marshal Erwin Rommel, along with his Afrika Korps, attempting to encircle Monty’s Eighth Army. This failed and eventually resulted in a German retreat. On October 23, the Second Battle of El Alamein began. The battle ended after twelve days. Despite 13,500 British dead and wounded, it was the first major offensive victory of the British over the Germans. Montgomery was promoted to general and was made a Knight Commander of the Order of the Bath. From this point on, the German army was driven further and further back, and this led to the destruction of the German Afrika Korps in May 1943. Thus ended the German and Italian presence in North Africa. 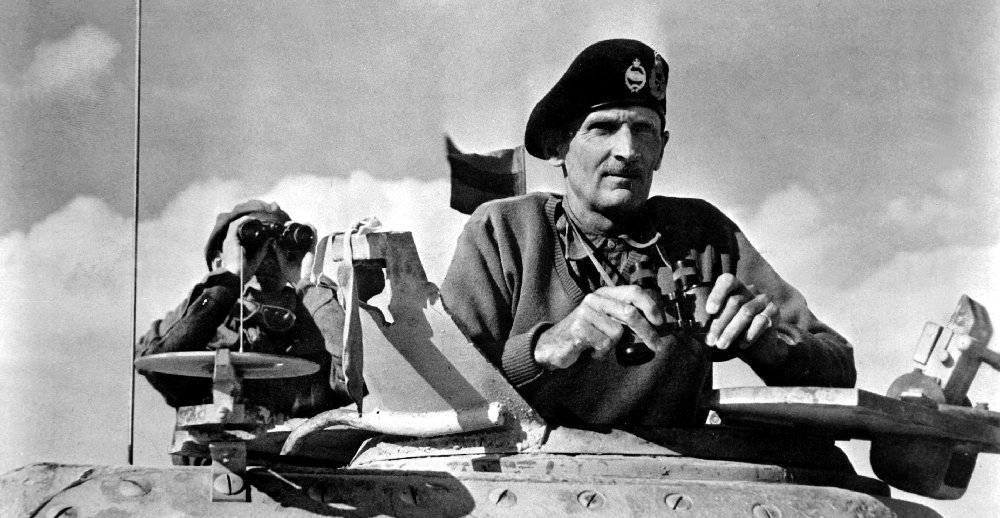 After the successes in North Africa, the Allies prepared a new major operation: the invasion of Sicily. This operation was codenamed Husky and was largely prepared by Monty. During the invasion, Monty had more and more trouble with the American commanders, especially with General George Patton. This resulted in a race to Messina, the last city to be conquered on Sicily, which was won by General Patton.

This was followed by the landings on the Italian mainland. These were difficult, but led to the fall of the Italian dictator Benito Mussolini on July 24, 1943.

On December 23, 1943, Bernard Montgomery was called back to Britain to help draw up plans for Operation Overlord, the invasion of Normandy. He was given command of the 21st Army Group with which he began the battle on June 6, 1944.

The battle in Normandy did not go as expected, forcing Monty to abandon his original plan and defeat the Germans in several unconnected offensives. The attack had stalled and criticism of Bernard Montgomery grew. The American generals called him “a bad general” and urged Eisenhower to demote him. Eisenhower did not do this because Monty was a folk hero in his native country and the apple of Churchill’s eye. After heavy air bombing, which included the destruction of 85 per cent of the historic city of Caen, the breakthrough came with the Battle of Falaise, in which a large part of the German forces were captured in a pincer movement (The Falaise Pocket). During this period he was promoted to field marshal.

Bernard Montgomery had developed a unique style of warfare in which he tried to limit his own losses and maximise those of the enemy. He did this in Africa, in Normandy and later in the Ardennes. Most other top generals in the Allied Army underestimated his capabilities and criticised his strategy. He was said to work too slowly, he wanted to “win the war by retreating”,… He could not understand this sentiment himself. Bernard Montgomery always tried to unbalance the enemy before attacking, the so called “soft method”. He did this by getting the enemy to move in order to strengthen his lines: in one place at the expense of another (for example, the Falaise pocket), and then, when the time came, to break through and encircle the enemy.

An example of this can be found in the Ardennes, where he wanted to keep Harmon’s corps ready at the far end of the “pocket” in order to attack. Harmon was not allowed to get involved in defensive actions until that time. However, it did not work then because Harmon could and did destroy the entire German 2nd Armoured Division.

All in all, it can be said that Montgomery was unique in his thinking. Where the world was under the spell of the Blitzkrieg, he propagated mainly balance. Where the Americans and Germans wanted to act fast to overwhelm the enemy, he tried to be cunning, to lure them into a trap and only then to destroy them.

After the German capitulation Montgomery was the commander of the British occupation forces in Germany. In this capacity, he refused all requests for pardons from Nazi leaders sentenced to death. This all played out during the Nuremberg trial. (1946)

Afterwards Bernard Montgomery was appointed Chief of the Imperial General Staff (CIGS), the highest military rank in Britain. He retained this post until 1948, after which he was soon appointed Chairman of the Permanent Defence Organisation of the Western European Union. This was replaced by the presidency of NATO in 1951.

Montgomery retired in 1958 and published his memoirs: The Memoirs Of Field marshal Montgomery. In these memoirs, he strongly criticised General Eisenhower for the way in which he had led the Normandy landings in 1944. The book appeared in 1961, and was entitled: “The Path to Leadership”.

Monty died on March 24, 1976 at his home in Alton, Hampshire. He was given a state funeral after which he was laid to rest in the nearby Holy Cross cemetery. He was 88 years old.