Erwin Rommel, 'The Desert Fox', was a German field marshal who played an important role during World War II in North Africa and Normandy. 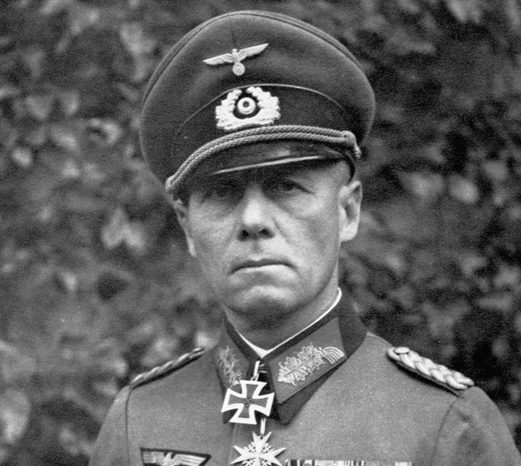 Erwin Rommel is one of the most famous German generals of World War II. He was a skilful general and a brave fighter, feared and admired on both sides of the front. But he was also vain, politically naive and loyal to the Führer. Portrait of a versatile soldier.

Rommel was born the second of four children to teacher Erwin Rommel and his wife Helene von Luz. He had a sister and two brothers. He attended grammar school and planned to work as an engineer at the Zeppelin factory in Friedrichshafen, but on the advice of his father, in July 1910, he opted for a military career. He joined the local 6th Württembergisches Infanterie Regiment, which was stationed in Weingarten. After 3 months he was promoted to corporal, and after 6 months to sergeant. In March 1911 he went to the officers’ school in Danzig. After completing it as a Leutnant (2nd Lieutenant), he returned to his regiment in January 1912, and became head of recruiting in Weingarten until the beginning of World War I.

Rommel initially fought with his regiment in the infantry during World War I; he was deployed on the Meuse River, west of Verdun, in the Argonne and the Vosges. In September 1914, he was severely wounded in the leg by a bayonet charge against three French soldiers after he ran out of ammunition. For this action Rommel received the Iron Cross 2nd Class. In January 1915 he had fully recovered.

In September 1915, Erwin Rommel was recruited for training with the mountain troops. In August 1916, he went into action with the Württembergisches Gebirgs-Bataillon, part of what was then Deutsches Alpenkorps, first in Romania. After a short stop on the Western Front, the Alpine Corps was deployed on the Italian front in September 1917, where the unit was loaned to the Austro-Hungarian ally as German support. In the Alpine region, the battalion was to fully master the shock troop tactics (precursor to the Blitzkrieg). The Württembergers made their mark when two companies of their formation, led by Oberleutnant Erwin Rommel, managed to break through the Italian front line and overrun an artillery position at the Battle of Caporetto (the 12th Battle of the Isonzo) in October 1917. An Italian counter-offensive was repulsed and an entire regiment of Bersaglieri was taken as prisoners of war. With the arrival of the rest of the battalion, Rommel led the formation to the rear of Monte Matajur (in present-day Slovenia), which was of enormous strategic importance, and was able to force even more Italians to surrender. After the capture of this mountain top, a total of 150 Italian officers and 9000 men were taken prisoner of war and 81 pieces of artillery were captured by the Germans; all this was accomplished with only 150 soldiers. Erwin Rommel was promoted to Hauptmann (Captain) and awarded the Pour le Mérite on 10th December 1917 for his part in this battle; Rommel was one of the youngest recipients of this award, which was actually meant for senior officers. 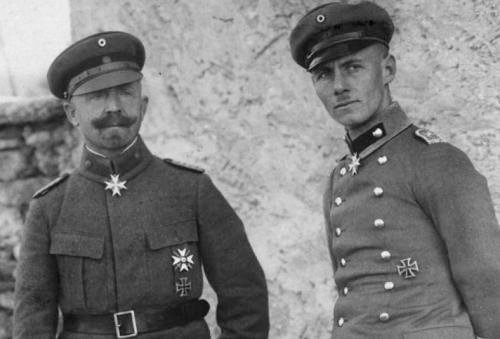 Major Sproesser with a young Erwin Rommel in 1918.

In October 1933, a few months after Adolf Hitler came to power, he was transferred to Goslar. There, Rommel, promoted to major, was appointed commander of the Goslarer Jäger. In March 1935, he was promoted to Lieutenant Colonel. Seven months later, he was transferred again, this time to the military academy of Potsdam. He published his experiences during the First World War in 1937 in his book Infanterie greift an (Infantry attacks). He met Adolf Hitler after his rise to power, became chief of the troops accompanying Hitler, and was appointed Major General by Hitler on August 1, 1939, a month before the start of World War II.

Erwin Rommel also fulfilled his function of chief of Hitler’s escort troops during the Polish campaign. Over four months after the victory in Poland, he became commander of the 7th Armoured Division. During the Blitzkrieg in Belgium (Fall Gelb) and France (Fall Rot), his division operated so fast that it was nicknamed la division fantôme (the ghost division) by the French. Even the German High Command did not always know where the division was. Rommel was later awarded the Knight’s Cross for his hussar drive through the Maginot Line.

In 1941, Erwin Rommel was promoted to the rank of Lieutenant General. After this, he was given the supreme command of the Afrika Korps, which set foot in the Italian colony of Libya. During the North African campaign, the British gave him his famous nickname, the Desert Fox, because he always improvised and used tricks to outwit the enemy when necessary. For example, at a military parade in Tripoli in March 1941, he made his tanks drive around a block to rejoin the back of the queue and make his quantity of tanks appear larger to deceive British intelligence. For the same purpose, he had fake tanks made out of cardboard and had cars dragging faggots and tent cloth behind them to create so much dust that it looked as if whole armoured divisions were advancing.

After having served a short time in Northern Italy, Erwin Rommel was appointed by Hitler on November 5 as Inspector of the Atlantic Wall. He had to inspect and then report on the section of these defences that ran from the North Sea to the Bay of Biscay. The ultimate goal of all this was to stop the expected Allied invasion. On the advice of Field Marshal Gerd von Rundstedt, then commander-in-chief of all German forces on the Western Front, he was appointed commander-in-chief of Heeresgruppe B on January 15 1944. This army group comprised the German 7th and 15th Armies, in a sector stretching from the Netherlands to southern Brittany in France. About the strategy of the defence he differed with Von Rundstedt: Von Rundstedt wanted to position the armoured divisions more inland, out of reach of the Allied navy, while Rommel wanted to position them along the coast. He was convinced that if they were positioned inland, they would have to run roughshod over the Allied air force before they could reach the front. He based this view on what he experienced at El Alamein: there the British air force was so outnumbered that his tanks had little room to move. Rommel had numerous improvements made in his sector of the Atlantic Wall. According to him, the first 24 hours of the invasion would be the most important and the attacker had to be driven back as quickly as possible, before a bridgehead could be established. This invasion took place on 6 June, in Normandy, in Rommel’s sector. After that, the German situation on the Western Front continued to deteriorate, partly due to the enormous sea and air superiority. 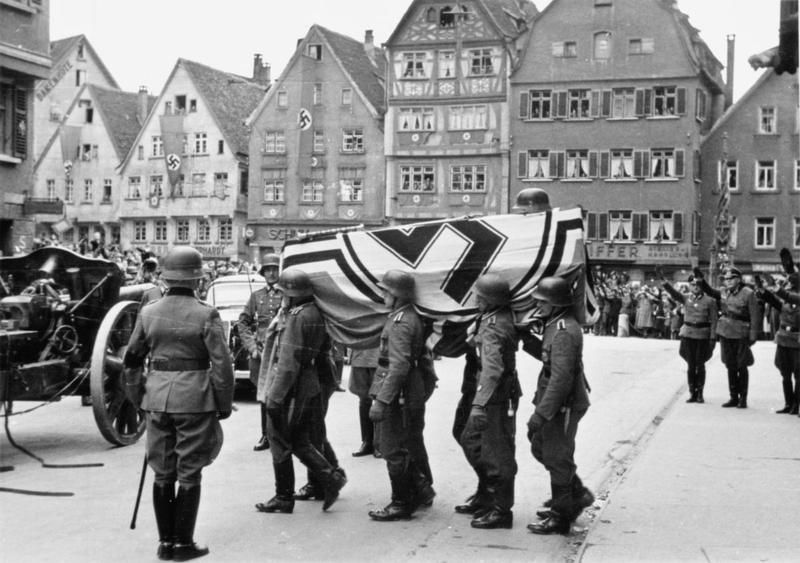 The state funeral of Erwin Rommel.

After the failed attempt on Hitler (July 20), he was suspected of complicity after an investigation by the Gestapo, because his name had been mentioned by the conspirators. This happened after torturing, among others, Caesar von Hofacker, a lieutenant colonel in the Luftwaffe and Von Stauffenberg’s nephew. He was one of the conspirators who helped convince Rommel to choose for the resistance. Especially General Heinrich Kirchheim (an opponent of Rommel), Field Marshal and Chief of the OKW Wilhelm Keitel and Chief of the Party Chancellery Martin Bormann had pushed for Rommel’s death sentence.

When he was at home in Herrlingen on October 14, 1944, he was visited by Generals Wilhelm Burgdorf and Ernst Maisel who persuaded him (on Hitler’s orders) to commit suicide and thus spare himself a show trial and his family the so-called Sippenhaftung. If he committed suicide, he would be buried with military honours and his family would receive a living allowance. This also prevented it from becoming a scandal and a breach of morale, with very detrimental consequences for Hitler and his henchmen, if it came to light that the popular Rommel had been eliminated on his orders. After a few minutes of reflection, Rommel decided to end his life and was driven out of the village by the generals. He took a poison pill in their presence, but never confessed to his involvement in the conspiracy. He was given a state funeral on 18 October. The German people were led to believe that Rommel had died of wounds sustained during the air raid on July 17. The true cause of death only came to light during the Nuremberg Trial, when accused Wilhelm Keitel was questioned.

Already in the First World War, Erwin Rommel showed great charisma and military skill. The rapid conquest of Mount Matajur was proof of this. The Deutsches Alpenkorps, in which he distinguished himself, was described by the Allies as one of the best units in the German army.

During the Second World War, Rommel’s military successes were not only respected by his troops and Adolf Hitler, but also by the troops of the enemy Commonwealth during the Campaign in North Africa. Rommel was always regarded as a chivalrous and humane military leader, unlike many others in Nazi Germany. His famous Afrika Korps was never accused of war crimes. The Commonwealth soldiers captured during the African Campaign were reported to have been treated according to the Geneva Conventions. Furthermore, orders to kill Jewish soldiers and civilians were ignored by him. He also disregarded the Kommandobefehl introduced on October 18, 1942. This humanity was due to several factors: the battles fought in Africa took place largely in virtually uninhabited areas, so there were hardly any civilian casualties. Even when there were raids by local tribes, Rommel decided to ignore them. Also, unlike the front in the Soviet Union, racial issues did not apply. Rommel’s personality also played a role in this: he realised that the more soldiers who died, the more suffering this meant for the affected families. Therefore, no more soldiers should be killed than necessary (i.e. only the absolute minimum). Krieg ohne Hass (War without Hate) became the motto of this approach.