Michael Wittmann was a notorious German tank commander in the Second World War. Who was active during the Battle of Normandy. 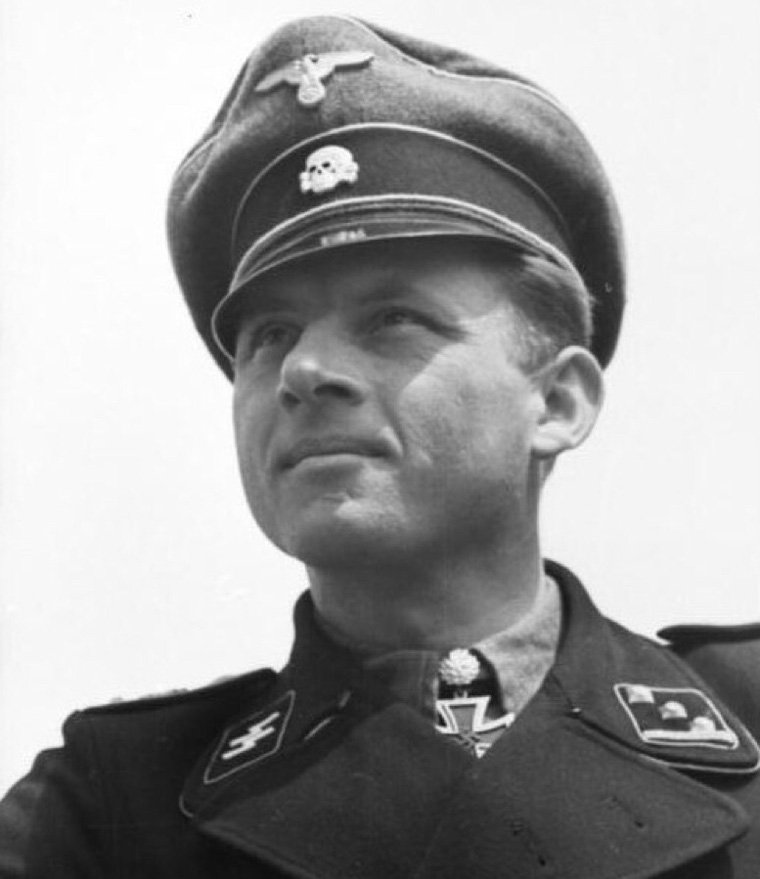 He destroyed about 156 enemy tanks, about 200 pieces of artillery and about 300 small army vehicles. Michael Wittmann, one of the most successful tank commanders in military history, was awarded the Knights Cross with oak leaf and swords, a high military decoration, for his actions.

Michael Wittman achieved most of his successes with a Tiger I tank. His most significant achievement was in the Battle of Villers-Bocage, where Wittmann single-handedly attacked an entire Allied army convoy. In just fifteen minutes, he destroyed 27 Allied armoured vehicles, including a dozen tanks.

Michael Wittmann was born in 1914 as a farmer’s son in southern Germany. After working in the Reichsarbeitsdienst for a while, he joined the German army in 1936. That same year, he joined the SS in Ingolstadt. On April 1, 1937, he joined the SS-Verfügungstruppe, the predecessor of the later Waffen-SS, which was to become the electorate of the German armed forces. During the attack on Poland, Wittmann was part of the armoured reconnaissance unit of the Leibstandarte-SS Adolf Hitler. With that unit he also fought as an armoured car commander in the Netherlands, Belgium and France. Subsequently he was trained as a commander of mechanised artillery.

Wittmann first saw action as such in the summer of 1941 as commander of a Sturmgeschütz III during the invasion of Greece. Later, in August 1941, he took part in Operation Barbarossa, the German invasion of the Soviet Union. He succeeded in eliminating dozens of Russian tanks. For this he was awarded the Iron Cross. After this, he switched from the Artillery to the Tank Weapon.

From the beginning of 1943, Wittmann was commander of a Panzerkampfwagen III and then of a Tigertank, a heavily armoured tank, which at that time was the most modern tank in the world. Through a combination of good vehicle control, tactical insight and guts, he was hard to beat on the battlefield. 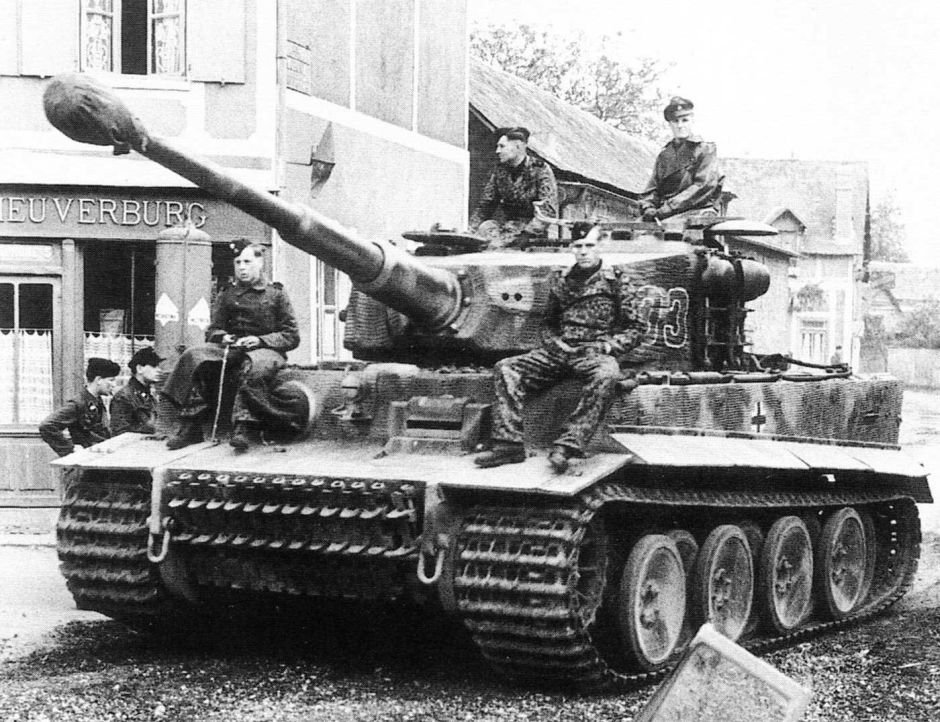 Example of a Tiger tank driving through the streets of a village somewhere in Normandy, 1943.

One of his most important tactical insights was to turn his tank completely towards the enemy instead of turning the turret. This saved him a lot of time and also allowed him to use the front armour of his tank. This was the strongest here.

In 1943 Wittmann took part in the Battle of Kursk, the biggest tank battle of all time. Wittmann destroyed thirty tanks, 28 armoured guns and two batteries of artillery. On July 18 the Leibstandarte was moved to Italy. After a deployment of several months in Italy, Wittmann returned to the Eastern Front with the Leibstandarte. During the battles from November 1943 to January 1944 Wittmann distinguished himself in such a way that he received the Knight’s Cross on January 14 and the oak leaf on January 30. Until January 7 he had shot 56 tanks, in the next 22 days he brought his total to 117.

After receiving the Oak Leaf from Adolf Hitler on February 2, Wittmann did not return to the LAH but was transferred to SS Panzerabteilung 101. During a furlough in Germany, he was received as a superhero. As with many other successful German soldiers, the German propaganda machine had widely publicised Wittmann’s victories in the media. Books, films and even postcards had been made of Michael Wittmann. Ironically, Wittmann was nothing like a hero: he was quiet, shy and modest. A real thinker who did not like to talk about his victories. Medium-sized and petite, he did not fit the SS stereotype.

After the Allied invasion the division moved to Normandy and arrived in the front area on June 12. On June 13 1944, as commander of a company of the 101st Schwere Panzerbataillon, Wittmann had to guard the very strategically situated French village Villers-Bocage with only six Tigertanks against advancing allied troops. Suddenly a large British tank column, unaware of any Tigers, entered the village. Wittmann organised a counter attack and the British were attacked from behind and from the front and were trapped between the houses. He himself took over a Tiger and drove it straight into the village, quickly destroying the surprised British tanks. Wittmann did this feat all by himself, because the other tanks could not enter the village in time due to blockades. Most of the enemy tanks were Cromwells with armament too weak to penetrate the armour of a Tiger. Within minutes, Wittmann took out most of the column, advancing until the Tiger was knocked out by a Cromwell hit on the drive wheel. In total the British lost thirty tanks, the Germans, who were still being reinforced, eleven, most of which could be recovered. For this act Wittmann was personally rewarded by Hitler on June 25 with the addition of the swords to the Oak Leaf and the Knights Cross which he already possessed. The German propaganda made it appear as if Wittmann had single-handedly eliminated almost all enemy tanks. Opinions are divided as to how many there really were. It was probably about a dozen real battle tanks and about fifteen other armoured vehicles and trucks. Therefore, the honour to have destroyed the most tanks in one short action, might go to the Char B1 bisEure under command of lieutenant Bilotte who destroyed thirteen German tanks in a row on May 16, 1940 near Stonne, or to SS-Unterscharführer Franz Staudegger; the latter destroyed 22 T-34 tanks on July 8, 1943 during the Battle of Kursk.

Michael Wittmann was killed when his Tiger was destroyed near the village of Cinthaux on August 8, 1944. There are several theories as to how this happened but it is most likely that it happened during a battle with British troops of the 1st Northamptonshire Yeomanry Regiment when his Tiger was hit by an M4 Sherman Firefly and exploded. A second theory is that Wittman’s tank was hit by rockets fired by British Hawker Typhoon fighters. The first theory, however, is the most consistent with both eyewitness accounts and official Allied and German archives. Because the wreckage of Wittman’s tank was removed immediately after the battle, no research could be done on it. 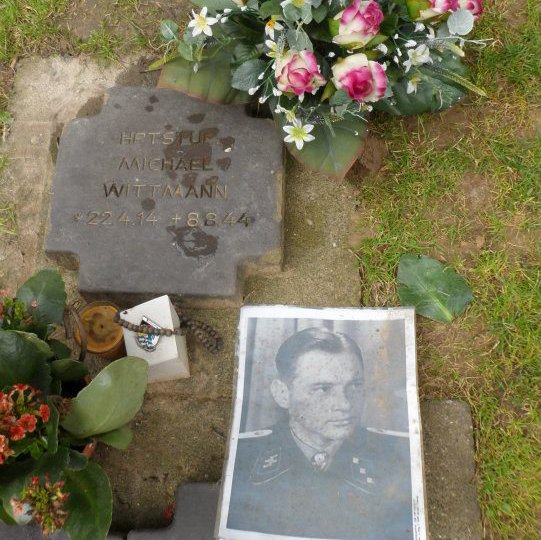 The Tomb of Michael Wittman at the German Military Cemetery in La Cambe, Normandy.

The British soldiers found Wittmann’s charred body and could only tell by his blackened medals that he was a successful officer. The British threw his body into an anonymous mass grave and only after the war was Wittmann officially reburied in the German war cemetery in La Cambe.