Find out how the American soldiers first set foot on Omaha Beach through the eyes of Harold Baumgarten. 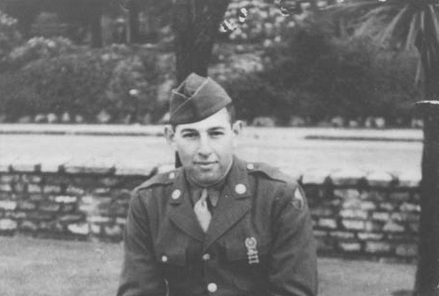 As we approached the beach, bullets began to hit our boat. B Company’s boat was hit by a shell and blown up. The wood splinters, irons and body parts flew and some 7 metres into the air. Our young British boat driver wanted to lower the hatch of the boat into the deep water and drop us off. Lieutenant Donaldson drew his pistol, pointed it at the frightened driver and ordered him, “Sail all the way to the beach!” The British helmsman’s fears were not unjustified as he saw a boat exploding to his left, all sorts of explosions and bullets hitting all around us and the presence of the mines attached to obstacles in front of us. Finally the boat stopped and the flap went down in neck-deep water.

German MG 42 machine guns were aimed at the opening of the flap. As I tried to jump out, the water below was bright red with the blood of those in front of me. Lieutenant Donaldson was shot instantly. Clarius Riggs was riddled by a machine gun and fell, head first, into the blood-stained water.

I jumped into the deck-deep water with my gun above my head. As I jumped off the hatch, a bullet clipped the top of my helmet. About 270 metres in front of us you could see an embankment of pebbles and sand topped with barbed wire. Behind this embankment you could see the even higher dunes where the enemy had trenches and hidden foxholes. On the beach itself, there were many obstacles such as geminate beams and Czech hedgehogs. These obstacles were placed there to jam or destroy the boats at high tide.

Some men, who had managed to leave the boat without being shot, were pulled under by the weight of their heavy and wet equipment. The life jackets were of no use and the water rose above the average man, from my unit. German snipers also shot a few men here and there. The water splashed with bullets as I ran through it.

It seemed surreal. About 10 metres to my left, 2 amphibious Duplex Drive tanks had landed. Where had the other 14 gone? A few men tried to take cover behind these tanks. I also saw a dead soldier hanging out of one of the two tanks. The other tank was actively firing a few salvos towards the enemy in the dunes. At this point we were only walking in single-deep water. Robert Dittmar ran up a few metres to my right and someone else from my boat ran up behind me to the left. An enemy machine gun fired a salvo at us. I heard an impact from Dittmar’s direction and immediately after that my gun was hit which gave a huge shake in my hands. There was a hole in the middle of my rifle, in the receiver, where the bullets are. The seven bullets in the receiver of my rifle had prevented the German bullet from piercing my chest. I heard another impact on the left behind me at the same time and the soldier who was walking behind me was hit.