The attack on Carentan was crucial, to connect troops from Omaha and Utah Beach. After four days of fighting, the city was liberated. 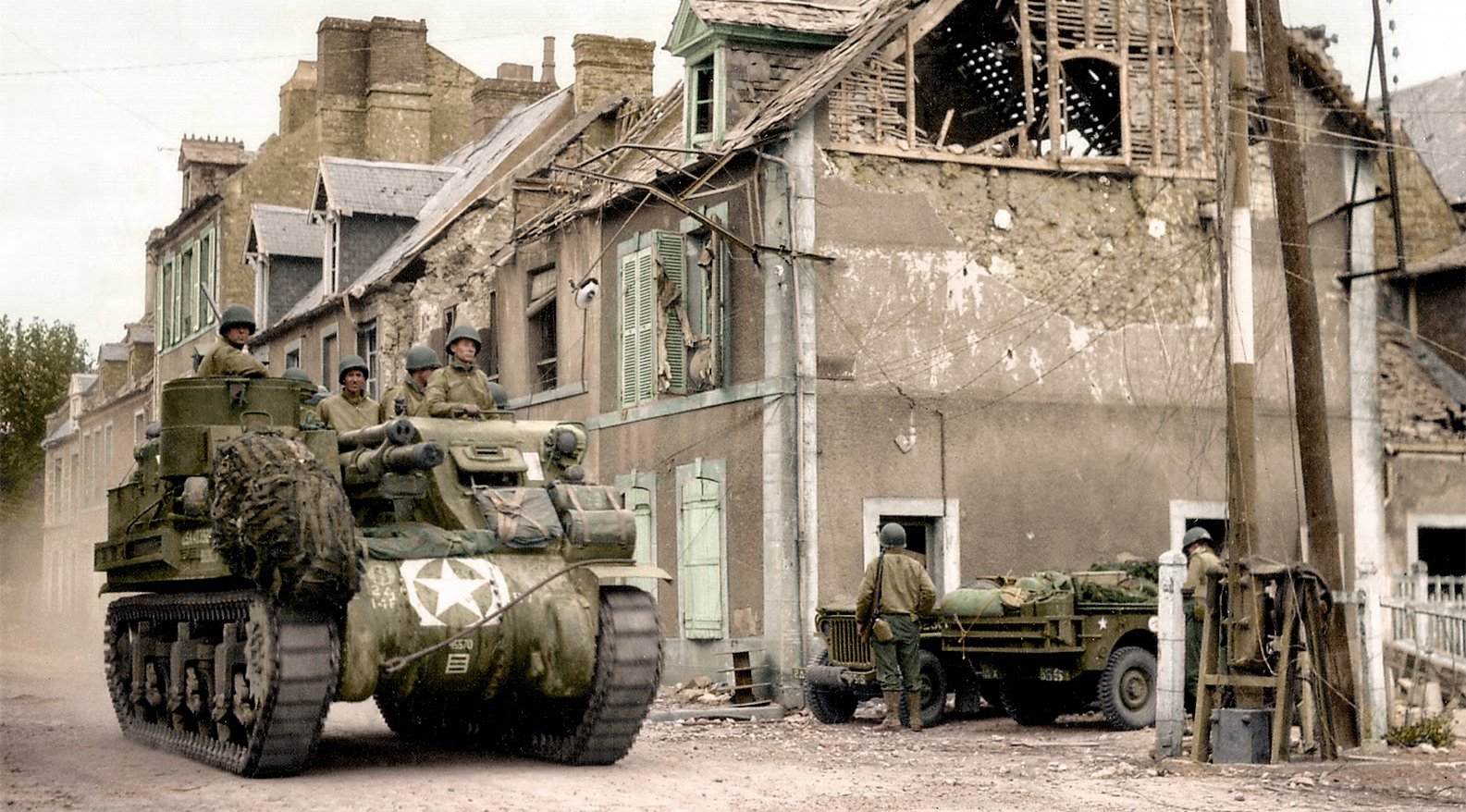 An American tank drives through Rue Holgate in Carentan on 18 June 1944.
Share this page
Related tags
101thBand of borthersbloodyCarentanEasy CompanyGulchHodgesOmahaSinkStadUtahWinters
Print page
Save as bookmark

On June 9 the 101st, together with the 502nd, had finished guarding the right flank along the Douve River. The 506th moved across the main Carentan road and the 327th was on the left side of the Douve opposite Brévands. The 501st was the reserve division. The attack on Carentan could begin.

General Maxwell D. Taylor wanted to surround Carentan with a pincer movement and open the attack from those positions. Patrols and aerial reconnaissance of Carentan indicated that the town might be lightly defended, then a double attack on Carentan was planned, using the 502nd on the right and the 327th on the left, which would jump just after midnight on June 10. Next, the mission of the 502nd was to occupy some bridges and block high ground southwest of the city along the Périers Highway (Hill 30). The 327th had to cross the Douve River at Brévands, move a mile east, and capture the town by the western road coming from Isigny.

Purple Heart Lane during the attack on Carentan, June 10

During the attack on Carentan by the 3rd battalion/502nd under command of Lt Colonel Robert G. Cole, it was found that bridge No. 2 (the Douve bridge) had not yet been repaired as the engineers were fired upon by an 88mm gun. Cole sent his 1st lieutenant, Ralph B. Gehauf, with a patrol across the river in a small boat. They made their way to the last bridge, which was blocked by a Belgian gate. The patrol was able to push the obstacle aside 18 centimetres, just enough for a soldier to squeeze through. The patrol was soon spotted, shelled by mortars and machine gun fire, and returned at 5.30 am, when the attack was delayed. 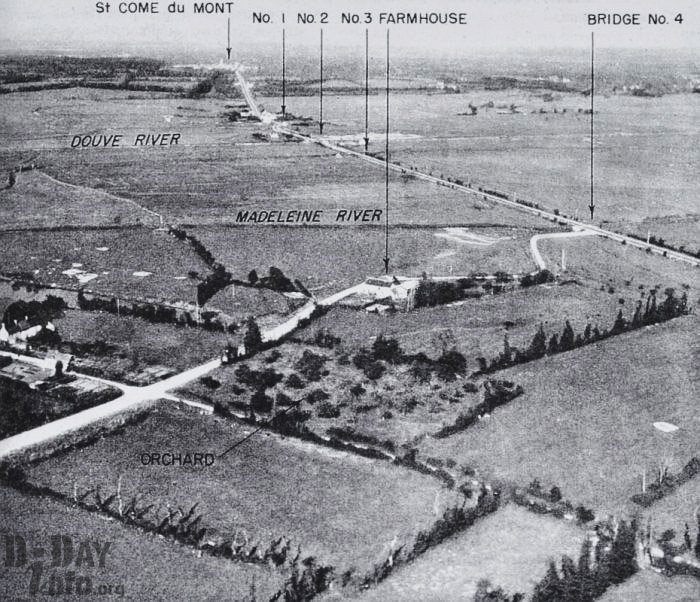 The purple heart lane of Carentan.

At 01.45 am, the 1st Battalion/327th Glider Infantry Regiment crossed the footbridges over the lower reaches of the Douve and by 06.00 am, under heavy artillery fire, the whole regiment had crossed the river. The Regiment had captured Brévands and started to move 5 kilometres south-west. Company A of the 401st, marched east toward Auville-sur-le-Vey to make contact with the U.S. 29th Infantry Division. The 327th encountered no stiff resistance until they approached the bridges over the Vire-Taute Canal east of Carentan at 6 pm. It went into the attack with two battalions in line and by midnight they were able to secure the east bank.

The Douve bridge was still not repaired when the 3rd Battalion/502nd Regiment returned to the scene at 12 noon. The paratroopers had engineering materials on hand to make a makeshift footbridge and began their attack shortly after 1 pm. Moving one by one and crawling along, the first parts of the battalion reached bridge No. 4 at 4 p.m. Most of the unit also made it past bridge No. 3. When they came under artillery and mortar fire, then sniper and machine gun fire, when they were within range of the Germans, the casualties were heavy. The night ended their advance but not the growing number of casualties; an attack at 11.30 pm by two low-flying German Ju 87 Stukas caused 30 casualties and knocked the regiment out of action altogether. The heavy losses suffered by the 3rd/502d, estimated at 67% of its original strength, led to the nickname “Purple Heart Lane” being assigned to that stretch of motorway from Carentan to Sainte-Mère-Église.

The attack on Carentan begins

During the night, the Germans stopped firing systematically. Company H crept through the gap in the German defence, followed by Company G and the Headquarters Company. They could take cover on both sides of the highway. Scouts, in the tip of the Company, almost reached an important Ignouf farm in the morning when they were held up by German fire. Lieutenant-Colonel Cole immediately pressed for artillery support, but the Germans would not budge. Using a smoke screen, Lt Colonel Cole ordered Major John P. Stopka at 6.15 am to have his battalions attack and eliminate the German positions. 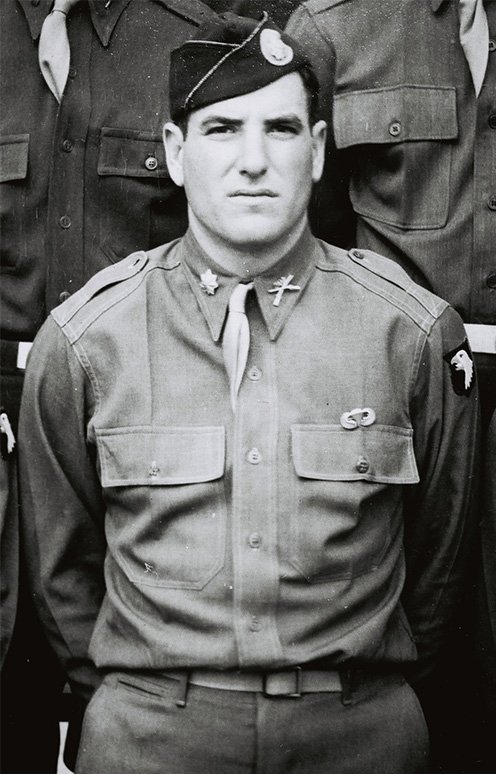 Using a whistle to signal the attack, Cole led a bayonet charge that overwhelmed the German defenders, for which he was later awarded the Medal of Honor. At first, only a small part of the Battalion took part in the attack, about 20 men, but Stopka soon followed with 50 others. The attack soon attracted the attention of other paratroopers who joined the fight. While storming an empty farmhouse, men of Company H found that many German paratroopers had dug themselves in along the hedges. Company H and G killed them with hand grenades and bayonets, but this resulted in many casualties on their side.

The survivors of the 3rd Battalion/502nd Regiment had taken up defensive positions and asked the 1st Battalion/502nd to attack. Lt Colonel Patrick F. Cassidy’s Battalion, had also suffered heavy casualties and was only able to reinforce Lt Colonel Cole’s defensive line. During a 2-hour truce at noon, American troops tried to negotiate the removal of casualties. With the exception of the truce, which was also used to resupply and reorganise, American troops had repulsed repeated German attacks.

The last German wave just failed to break through the defensive line of the 3rd/502nd around 6.30pm. They had broken through the whole line to the last Hagen between the Douve and themselves. Lt Colonel Cole’s artillery officer feared the Germans would break through the line and decided to bomb the last areas of the line. This resulted in several American casualties killed by friendly fire. The overwhelming barrage, which lasted five minutes, did, however, result in a withdrawal of the last German assault troops.

Patrols of the 327th had discovered a partially destroyed pedestrian bridge over the Vire-Taute Canal at the point where it connected with the Douve River, north-east of the town. The bridge was repaired at 10 a.m., and a Company made up of sections of 2nd (Company G) and 3rd Battalions (Company A 401) crossed the bridge and attacked the wooded banks of the Bassin à Flot basin, but, like the 502nd, were held up half a mile (1 km) short of Carentan by machine-gun and mortar fire which their artillery could not suppress. 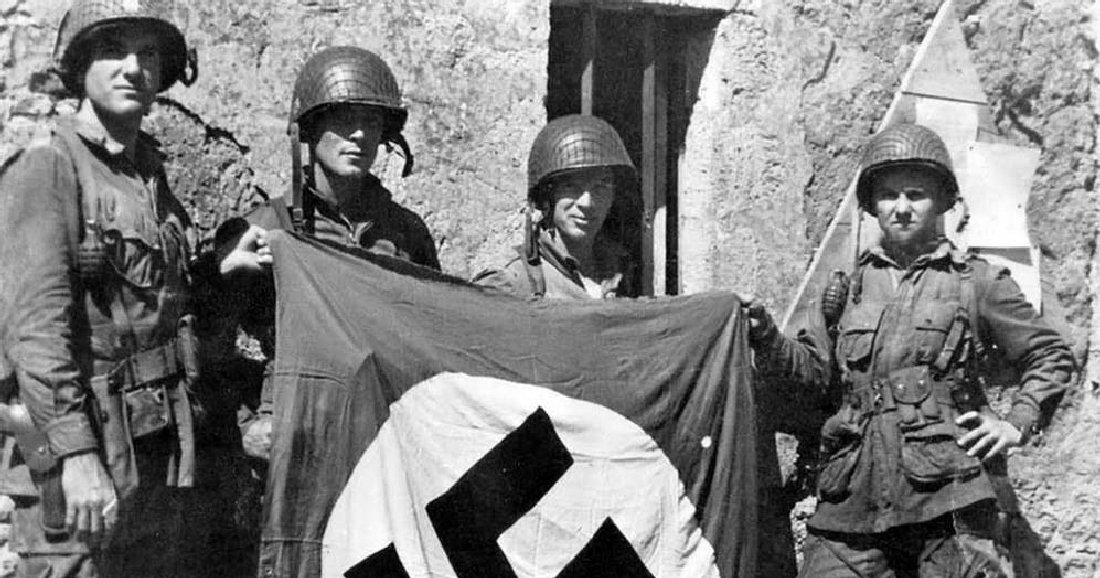 The capture of Carentan, June 12

To complete the capture of Carentan, General Courtney Hodges of the First Army had formed a group under Major Anthony McAuliffe to coordinate the final assault on Carentan. The mission, which aimed to capture Hill 30, was given to the 506th Regiment. The 501st was relieved of its defensive positions. The manoeuvres were covered by night artillery bombardment of Carentan by Marine Corps artillery, 4.2-inch mortars and destroyers which had made contact with the 327th along the eastern channel.

Carentan station after the bombing of June 12 1944.

After the night, two battalions of the 506th moved south of Carentan, where they made contact with the 2nd/502nd regiment at 02h00 on 12 June. Then they marched to Hill 30 (the village of la Billonnerie), which they captured at 05h00. The 1st Battalion took up defensive positions on the road with an eye to the south, while the 2nd Battalion was ordered to the north to attack the town. The 501st Regiment, which had moved to its position behind the 327th Glider Infantry during the night, crossed the canal, reaching Hill 30 at 06.30. 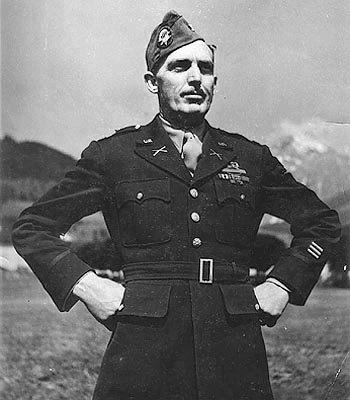 At 06.00 hours Carentan was attacked from the north by the 1st/401st Regiment and from the south by the 2nd/506th Regiment. Both regiments received machine-gun fire from the German rearguard, but the 2nd/506th also received sporadic artillery fire south of Carentan. Despite this, both regiments secured the rearguard in a short battle near the railway station and arrived in the centre of the town at 07.30 hours. The 1st/506th regiment was drawn into the more serious fight south of the town when it had to rescue Col. Sink’s command post, having advanced too far into the German lines during the night.

In the afternoon, the 506th and 501st moved south-west but were stopped after a mile by heavy opposition from new German units, including some tanks. The 17th SS Panzergrenadier Division had planned a counter attack on Carentan, but its remaining troops were held up by Allied air attack. Instead of counterattacking, the Germans dug in on the heights south of Carentan and put up stiff resistance to the Americans until dark.

At dawn on June 13, the 101st Airborne was about to attack the German line until it was suddenly attacked itself by tanks and heavy artillery. Two battalions of the 37th Panzergrenadier Regiment, supported by the 17th Panzer Battalion and Fallschirmjager Regiment 6. The 501st Regiment, on the American left flank, took heavy losses and had to withdraw completely. Company’s Dog and Fox of the 506th, on the left flank, eventually withdrew as well, and by noon the spearheads of the German attack had come within 500 yards of Carentan. Only Company E (Easy) of the 506th Regiment, commanded by First Lieutenant Richard D. Winters, anchored its right flank against a railway and held its position. Fortified by the 2nd/502nd Regiment, Easy Company was able to hold off the German attacks until American tanks came to reinforce them. 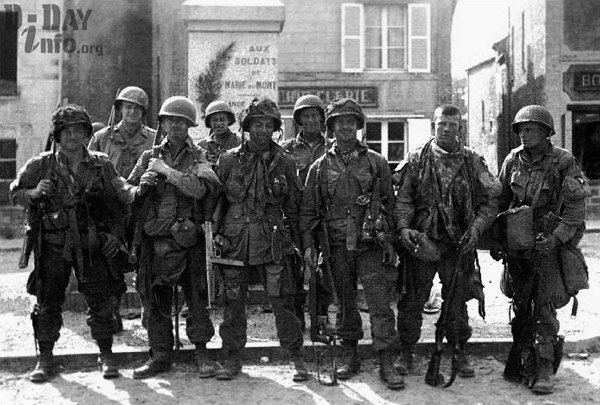 In response to the German counterattack, General Bradley moved the U.S. 2nd Armored Division into Carentan at 10:30 a.m. At 2 pm the 2nd Division attacked, supported by the self-propelled 105-mm howitzers of the 14th Armored Field Artillery Battalion. A unit of tanks and mechanised infantry moved towards Baupte in the area of the 2nd/506th’s where they crushed the German main lines. A second unit pushed back German troops along the Périers motorway, inflicting heavy losses in men and equipment. The 2nd Division then moved one kilometre west behind the original lines. 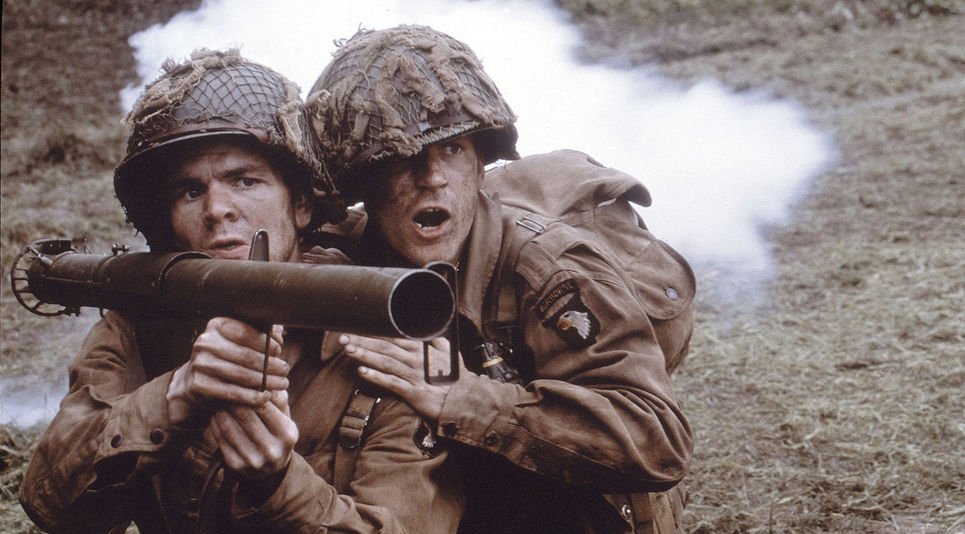 Episode 3 van Band of Brothers: Battle of the Bloody Gulch.

The battle waged by the unexpected German counter-attack became anecdotally known among the surviving paratroopers as “The Battle of Bloody Gulch”.

It would take until 15 June before the whole town was cleared of German troops. The losses for the Germans were high, the exact number is unknown. The Americans also suffered significant losses, although these were somewhat limited.