The Battle of Caen played an important role for the Allies as this city was a vital junction of important access roads.

Soldiers of the Queen's Own Rifles of Canada (3rd Can Div), in front of the placard.
Share this page
Related tags
CaenCapitalCharnwoodHoofdstadMontgomeryOrneTedderWindsor
Print page
Save as bookmark

The Battle of Caen began on July 4 with Operation Windsor, a preliminary attack by the Canadian 8th Infantry Brigade to take the village of Carpiquet and its airbase west of the city. Carpiquet was defended by a small detachment of their most hated enemy, the SS-Panzerdivision Hillerjugend. This battle, in which the Regiment de la Chaudière, the Queen’s Qurn Rifles of Canada, the North Shore and the Winnipeg Rifles were out for revenge, was to be one of the dirtiest of the entire Norrnandic campaign.

The Canadian offensive began at 5 a.m., supported by the heavy guns of HMS Rodney and HMS Roberts, 24 kilometres away. The village was reduced to rubble. Of the fifty or so ss armoured grenadiers, many were buried alive. Some managed to crawl out, covered in dust, from under the fallen beams and rubble. They quickly cleaned their weapons and fired back when the Regiment de la Chaudière attacked. Despite their small numbers, they inflicted heavy losses on their attackers, but by 2 p.m. what was left of the village was in the hands of the Canadians.

According to a Canadian source, the French Canadians of the Regiment de la Chaudière went berserk at dawn and cut the throats of every SS man they saw, ‘both wounded and dead’. In the end they were calmed down by officers with drawn pistols.

Today, no prisoners were taken on either side.

The Canadians, in Operation Windsor, failed to take Carpiquet completely. They owe their failure to the British 43rd Division, which lost Verson, a village just south of the air base, when it was attacked by part of the 1st SS-Panzerdivision Leibstandarte Adolf Hitler. Verson was not recaptured until four days later, during the Battle of Caen itself.

Montgomery, who was well aware of the growing annoyance he was causing in Whitehall, at SHAEF and at the headquarters of Bradley’s American First Army, knew that he could no longer delay the conquest and thus the battle for Caen. He would have to attack the city head-on. The offensive was codenamed Operation Charnwood. In order to limit the number of British casualties, he decided to ask the RAF on July 6 to force a breakthrough by means of a heavy bombardment, a possibility that had been suggested by Leigh-Mallory three weeks earlier. And on June 25 Eisenhower had written to him: ‘Do not hesitate to ask for as much air support as you can get. If there is a legitimate opportunity, we must bomb the enemy with all we have.’ That same day he also wrote to Tedder to ask him to ensure that the ‘maximum amount’ of air support would be given.

When the grouped formations of Lancasters and Halifaxes appeared in the sky at 8.30 p.m. that evening, the British and Canadian infantrymen jumped out of their narrow trenches to cheer them on. The crew of the tanks climbed up on the turret to get a better view. An officer of the Guards Armoured Division described the bombardment of Caen as ‘a magnificent spectacle’, Most onlookers, it seems, assumed that the French civilians had been evacuated.

I was sitting by a river smoking a cigarette and watching as 2,300 tonnes of bombs were dropped on Caen some 10 kilometres away.

The inhabitants of Caen, who had heard German officers say that their town would become the ‘French Stalingrad’, had feared the worst. But the signs that the Wehrmacht was preparing to retreat gave them courage after all. On June 26, the rearguard began to retreat. The Gestapo returned to destroy the evidence of the massacre they had inflicted on the resistance. And on July 6, the German engineers began to destroy the harbour installations at Caen along the canal. That day the Feldkommandantur also ordered the remaining inhabitants to leave the city, but again this had little effect. Only an outpost detachment of armoured grenadiers of the SS-Hitlerjugend stayed behind in Caen. 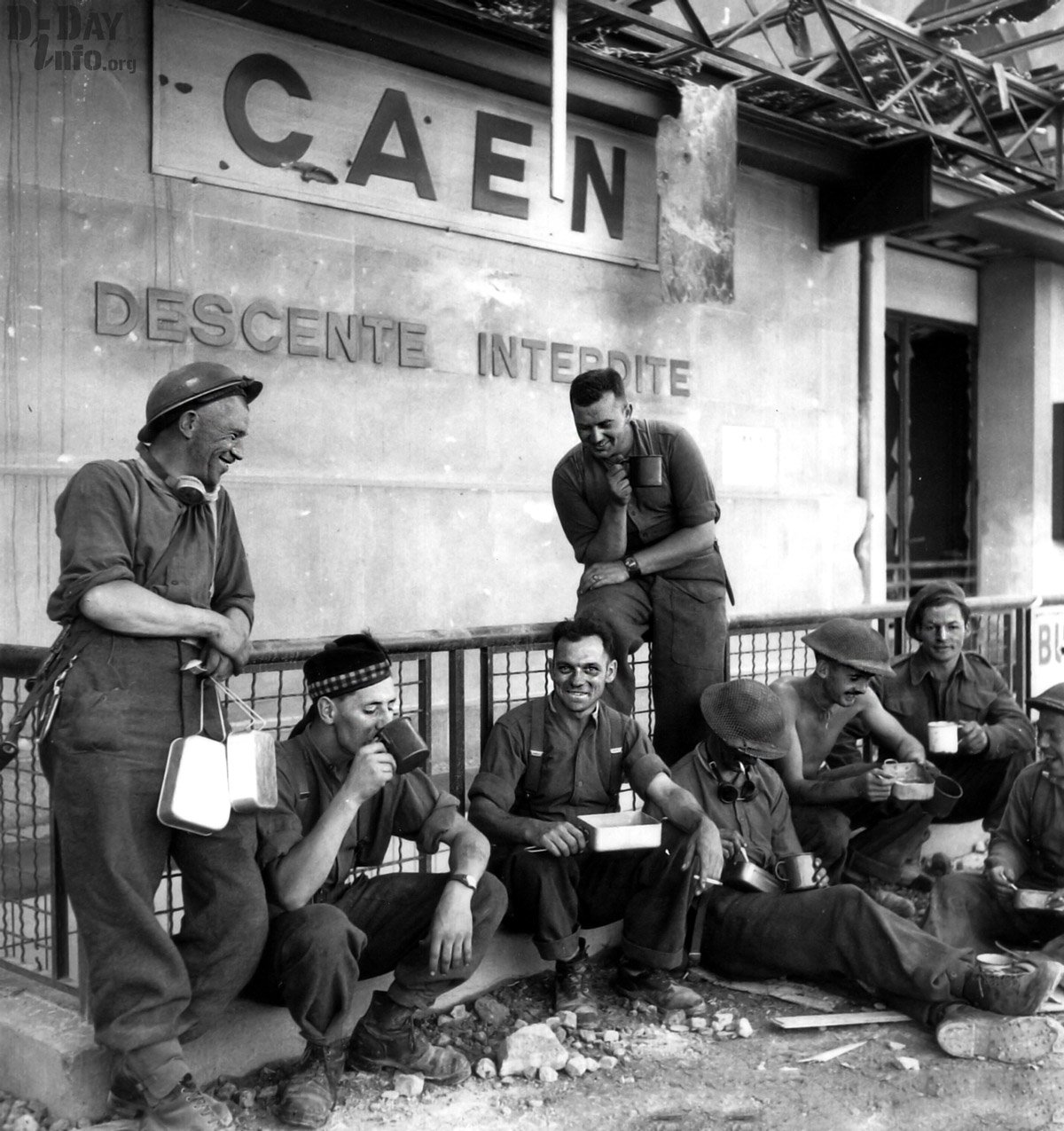 The ‘Führer order’ that Caen should be retained at all costs was followed throughout the day on July 8. General Eberbach only agreed that night to Kurt Meyer’s stubborn request to withdraw the remnants of his Hitler Youth to the southern part of Caen across the Orne. Eberbach felt he could justify the retreat to OKW because they were practically out of ammunition and new supplies were impossible.

On July 9 the city was still under a veil of smoke and dust. André Heintz was woken up at 5.30 a.m. by a comrade from the resistance. The Germans are leaving,’ he told him. They saw the convoys retreating through the city, but still the British guns did not fire. Their leader, Commander Gilles, handed out the last few pistol machine guns and sent the members in pairs north to serve as guides for the Allied troops. Heintz put on his belt, a tricolour with the Lorraine cross. He quickly took it off his arm again when he saw a German soldier at the former university swimming pool. But the German was dead, killed by a blast and as if nailed to the ground. The first British soldiers he encountered recognised the band and raised their thumbs to him.

The devastation was so great that even with their maps the British and Canadians could not work out where they were. Most of the roads were impassable and a few isolated snipers had been left behind. A column of Canadian armoured cars came down the rue Saint-Martin. The commander, who had been ordered to cross the city as quickly as possible and to occupy the bridges, asked an onlooker ‘Where is the Orne?’ He climbed onto the armoured car to show him the way, but machine-gun and anti-tank fire came from the German defensive position a little further on. The armoured car quickly reversed and their French guide had to jump off and take cover.

The Battle of Caen is Over

On July 10, in the presence of Monsieur Daure, the new Prefect appointed by De Gaulle’s provisional government, a ceremony was held during which the tricolour was hoisted on the façade of the Eglise Saint-Etienne. Many of those present were moved to tears. Three days later, the British Second Army held a victory parade on the place Saint-Martin. A Scottish bagpipe band started off while another tricolour was hoisted. The faces of the French crowd were dumbfounded. They had never heard the Marseillaise performed by bagpipes.

Operation Charnwood had been only partially successful, since only the northern part of Caen had been taken on July 10. The Second Army had not succeeded in capturing enough ground to continue the buildup. The bulk of what was to become the Canadian First Army had to wait in England. The exasperation at Bradley’s headquarters and at SHAEF was now echoed loudly in Washington and in the American press. Many reproached Eisenhower for not having been more firm with Montgomery.

On July 18 the 3rd Canadian Division succeeded in driving the Germans out of Caen for good. But the battle for Caen had taken its toll. The city and the surrounding villages were largely destroyed. The reconstruction lasted until 1963, and today little is left of the old city.