The battle for Saint-Lô was crucial for the Allies. Holding this city was especially important because of its many access roads.

The city of Saint-Lô after the bombing. No less than 95% of the buildings were destroyed by the bombings.
Share this page
Related tags
BradleyCobraHill 192JunctionKnooppuntSaint-LôSt. LôWaysWegen
Print page
Save as bookmark

General Bradley had for some time been looking for a new approach to the problem of fighting in the hedgerow area. Continued frontal assaults along well-defined routes of advance were clearly inadvisable if only because they were far too costly in manpower, apart from the fact that the rate of advance was disturbingly slow. Bradley wondered if he could muster enough forces on a narrow front to launch a massive attack and break through the German defences. Perhaps with powerful air support he could do so.

The idea was attractive. But to launch such a massive attack he would first have to win the battle of Saint-Lô as this position was a junction of important roads. After conquering Saint-Lô, he would be able to launch his breakout attempt, Operation Cobra, from there. Montgomery had also enlisted the help of strategic bombers to take half of Caen. 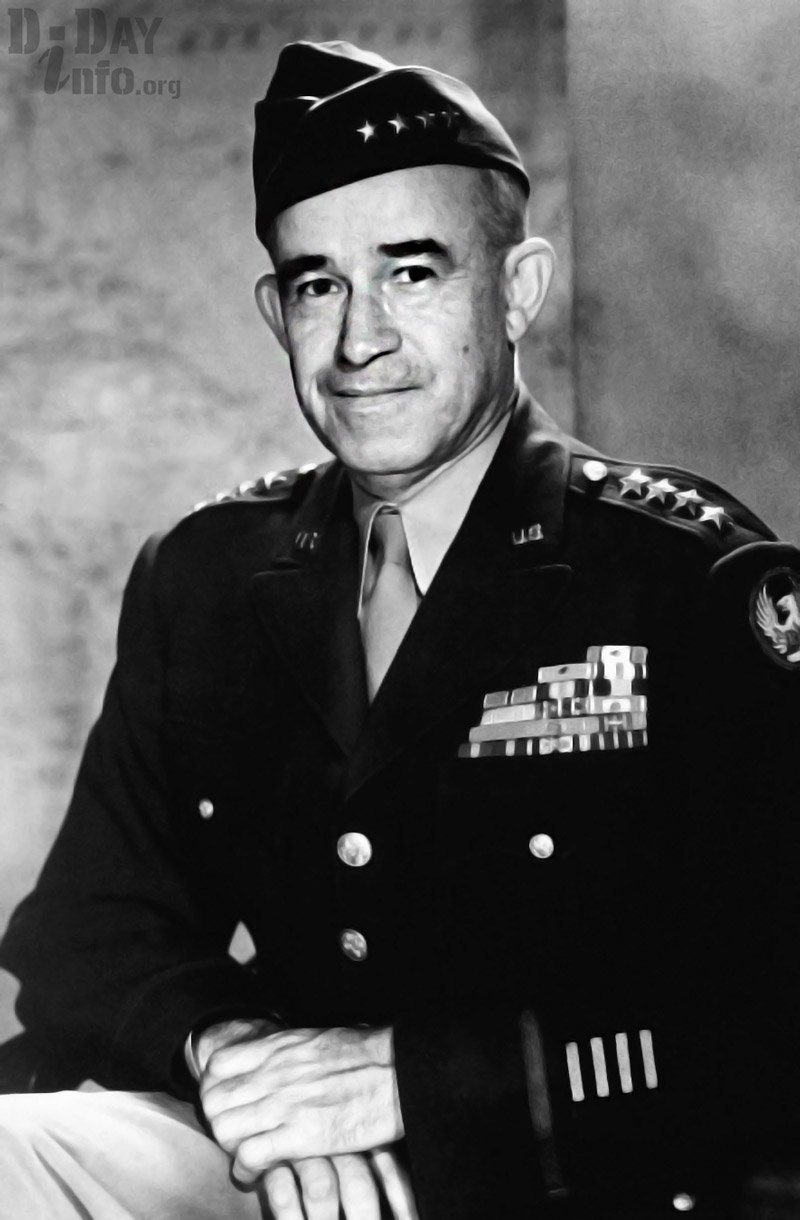 Abandoning the Coutance/Caumont road, which had been his first objective, Bradley chose a nearer road, that from Lessay over Périers to Saint-Lô, an ancient Roman military road, which runs directly across Cotentin. When, in the third week of July, his troops had reached the terrain overlooking that road, he was almost ready to start his great attack. He now had to win the battle for Saint-Lô but that was difficult to conquer as the terrain around the town, characterised by the ubiquitous hedgerows, favoured the German defenders.

Saint-Lô, a charming, quiet little town, as one of its residents called it, had been repeatedly attacked on D-Day. For a week afterwards, Allied bombers had tried to make it a ‘chokepoint’ by impeding German troop movements to the landing sites.

Hill 192 during the Battle of Saint-Lô

With the city in ruins and 800 of its inhabitants killed in the previous bombing, its value to the Germans and Allies alike was limited to the roads that converged on it. The defence of Saint-Lô was entrusted to the Second Parachute Army Corps and to the Third Parachute and 352nd Infantry Divisions. The American 19th Army Corps of Major General Corlett would directly attack Saint-Lô with the 29th and 35th Division. But before the troops had a chance to enter the city, Hill 192, a key point seven kilometres east of it, had to be captured. That was the task of the American 5th Army Corps of General Gerow, who would attack simultaneously with the 19th Army Corps.

The view from Hill 192. From this point the Germans could clearly see where the Americans were attacking and then artillery support could be requested.

Hill 192 had been “so heavily shelled by artillery”, said one officer, “that on aerial photographs it looked like a moth-eaten blanket”. The hill had the inevitable rows of hedges and a defence had been made in its depths. The American 2nd Division had lost 1,200 men in three days when it tried to take the hill in June. When the division made a second attempt on July 11, it had more success. ‘We have to fight hard,’ the divisional commander reported, ‘but there is a little progress: a hundred yards here and a hundred yards there.’ By noon the Americans were on top of the hill and they immediately began to organise their own defences against any German counter-attack.

The commander of the Second Parachute Corps reported during the battle of Saint-Lô that his whole front had ‘burst into flames’. American artillery fire, he said, and perhaps he exaggerated a little, had destroyed two-thirds of the established strength of his parachute division and one regiment of an infantry division had only 180 men left out of 1000. Could he get reinforcements? No, he could not. Bradley’s attacks elsewhere along the front gave the Seventh Army plenty to do.

Despite their diminished numbers, and despite the fact that during the battle for Saint-Lô they had only a limited amount of ammunition at their disposal, the German paratroopers and infantrymen had inflicted a loss of 1000 men in two days on the American 29th Division and almost as much loss on the American 35th Division.

Corlett hoped to enter Saint-Lô from the east and he sent the American 29th Division down the slope of a ridge now covered by the American 2nd Division on Hill 192. But the troops soon became entangled in a maze of hedge-lined lanes and lost their sense of direction and coordination. The usual symptoms of an offensive battle, such as lack of cohesion, began to appear. Corlett, who had been unsuccessful in the east, now turned his attention to the American 35th Division, which had made surprisingly good progress along the banks of the Vire; in three days it had taken out 840 men of the Three Hundred and Fifty-second Division, which had not even had time to count the dead. Corlett ordered the American 35th Division to capture Hill 122, just north of Saint-Lô, and when one regiment had done so, the men had an amazingly good view of the town, which was barely a mile and a half away. Now the battle for Saint-Lô could really begin.

The defence of Saint-Lô crumbles

The capture of Hill 122 was the cause of the crumbling of the German defences, but the Americans hardly noticed. A battalion of the 29th Division moved unnoticed through a hollow road to within 1000 metres of the front and reached the eastern edge of Saint-Lô. There it was discovered by the Germans, who isolated the battalion with their artillery and mortar fire and thwarted attempts to relieve it. 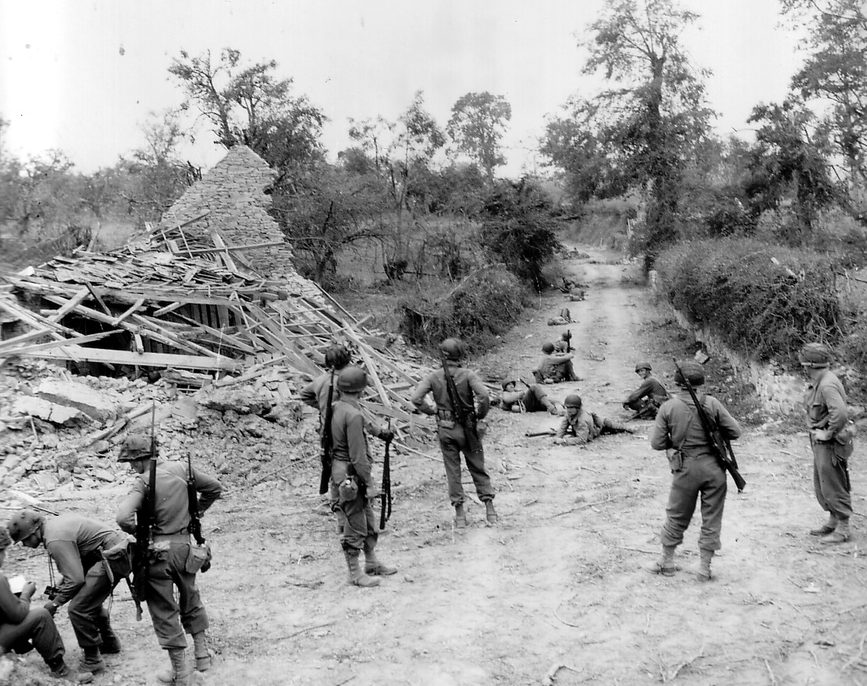 American soldiers resting along a road on Hill 122, north of Saint-Lô. July 17.

Shortly before daybreak on July 17, the seventh day of the Battle of Saint-Lô, Major Thomas D. Howie led his battalion in a ‘silent march’ (where the men were not allowed to make any noise) towards the trapped troops. Howie’s men crept forward through the morning mist and reached the isolated positions. When asked if he could penetrate further into the eastern part of Saint-Lô, Howie replied: ‘Will do’. A few moments later, he was killed by a German shell. As the shelling continued, it was impossible to penetrate further into Saint-Lô and the main force could not reach the isolated troops. The hollow roads were so clogged with broken vehicles, dead horses and discarded equipment that all attempts to reach the isolated units failed.

It soon became clear to the Germans that they would not be able to hold Saint-Lô for much longer. The loss of Hill 122 in the north, the advance of Howie’s men almost to the east to cut off the 352nd Division, and finally the fact that his men were near exhaustion, made the commander of the Second Parachute Corps decide to ask permission to withdraw from Saint-Lô that afternoon. The Seventh Army Headquarters conveyed his request by telephone to Rommel’s Army Group B headquarters.

Weakening of the German leadership

A retreat to a line north of Saint-Lô was hinted at, but of course a retreat meant retreating to the hills south of the city. Hitler had explicitly ordered a stand-off and so neither Army Group B nor the commander of the Seventh Army could sanction a retreat. The only headquarters that had that authority was that of Hitler himself, who was running the war from a bunker in East Prussia. It may therefore come as a surprise that Army Group B almost immediately replied to the Seventh Army:

“You must take the measures, which you yourself think are necessary. If you must retreat, go ahead. But report to us later that the enemy had penetrated your main line of defence in several places and that you hardly saw an opportunity to form a new line further back.”

This unusual conversation was a result of turmoil in the headquarters of Army Group B. Rommel had driven off to visit the front, an Allied plane had machine-gunned his car, his driver had lost control of the wheel and driven into a ditch. Rommel, who had suffered a severe concussion, was taken to hospital unconscious. That evening, von Kluge also took command of Army Group B.

On the afternoon of July 18, an American vanguard, after infantry and artillery had weakened the German outposts with intensive fire, entered the city. At the head of the column, the body of Major Thomas Howie was carried in a flag-draped coffin on the bonnet of a jeep, as a gesture of respect to the fallen and a clear reminder of the many who had sacrificed their lives for a task still unfinished.

In the background, covered with the American flag, is the coffin of Major Thomas D. Howie on the ruins of the ruined church, Saint Croix, in Saint-Lô while his men defend this position, July 19, 1944.

The battle of Saint-Lô had cost the American 19th Army Corps nearly 6,000 men. “We won the battle,” said one of the survivors, “but if you look at the high price we had to pay for it, we lost.”

‘Far too many hedges,’ was the comment from one unit, when asked why it had all gone so slowly. ‘We must move forward slowly, as we are doing now, conquering hedge by hedge.’ That was the procedure everywhere and at that rate the war could last a very long time. Twelve divisions had lost a total of 40,000 men in 17 days and had moved the front of the American 1st Army less than thirteen kilometres. But through that suffering and effort Bradley had achieved what he needed for his massive attack (Operation Cobra). If he could launch it and get it well under way, the bitter fighting in the hedgerow area might come to an end.