The capture of an intact major port at the Battle of Cherbourg was crucial to a successful advance against the Germans in Western Europe.

Soldiers of the 79th Infantry Division with German prisoners of war after the liberation of Cherbourg.
Share this page
Related tags
BattleBelegeringCherbourgCityCollinsCotentinFort-du-RouleharborportSiegeSlagvon Schlieben
Print page
Save as bookmark

The Battle of Cherbourg, and certainly its capture, was one of the Allies’ most important objectives in the early stages of Operation Overlord. The capture of an intact major port was crucial to a successful advance against the Germans in Western Europe. But of course the Germans knew this too. They had fortified Cherbourg on all sides in a 15 km perimeter of forts and bunkers.

While General Collins was making plans for the Battle of Cherbourg on June 18, Sir Bernard L. Montgomery , commander of 21st Army Group and supreme commander of Allied ground forces in Normandy, issued his first written directives of the campaign.

“After the extraordinary intensity of the first few days, we had to slow down the pace of operations … There was nothing against that, but we have now reached the point where we have to begin other tasks and reap the harvest.”

By this he meant, the capture of Caen and Cherbourg.

He ordered Sir Miles C. Dempsey, commander of the British 2nd Army, to begin the capture of Caen, which he considered the key to Cherbourg. But when Montgomery discovered that the Germans were preparing an offensive against Bayeux, he abandoned the attack on Caen. Only on June 25, Dempsey would start with a preliminary attack on the city of Caen. For the Germans, this was the reason to immediately start their offensive against Bayeux. Troy Middleton across the Cotentin peninsula from Carentan to the coast with the front to the south, and secured the rear of the 7th Army Corps, Collins sent the 4th, 9th and the newly arrived 79th Division northwards. All three divisions conducted a vigorous reconnaissance operation on June 19, putting pressure on the German defences. That evening, the German General von Schlieben evacuated Valognes and Montebourg and withdrew all his troops within a ring of forts, which formed the immediate defence of Cherbourg. 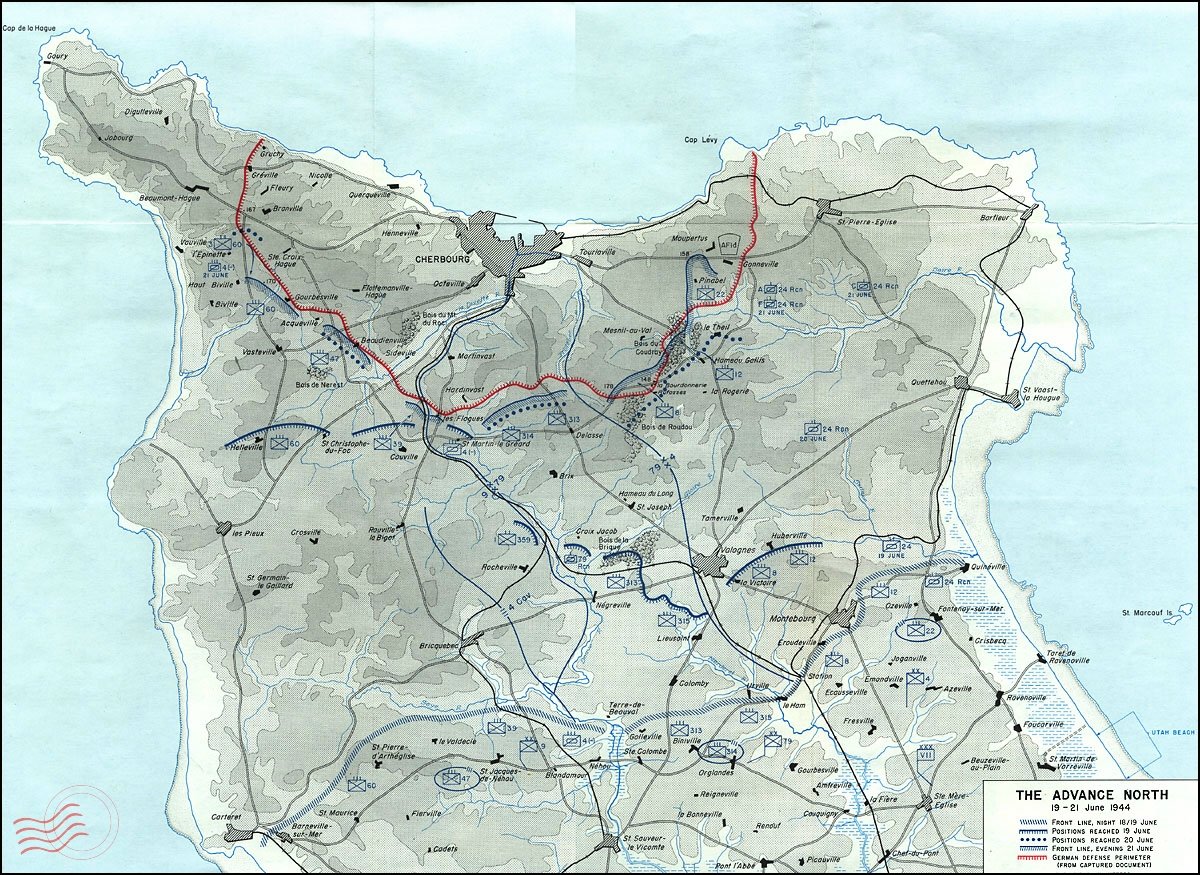 German defences (red line) around the town of Cherbourg.

The defence of Cherbourg consisted of a semi-circular belt of concrete forts and field fortifications, six to ten kilometres from the town. Built on dominating terrain, they controlled all access roads; watercourses and dykes were made into tank barriers and anti-aircraft batteries were set up for both anti-aircraft and ground defence. Four army units occupied the positions. Although supplies were kept up by being dropped from aircraft and brought in by ships and submarines, the enclosed troops had little combat value.

Delay for the Battle of Cherbourg

As the divisions of the 7th Army Corps patrolled on June 20 and 21, looking for a weak spot in the German defences, a storm that brewed up over the Channel and lasted for four days suddenly made the urgency of capturing the port city felt. The storm broke loose on June 19, just as supplies were starting to arrive at the landing sites. The shuttle services had to be suspended. Dozens of small boats were thrown onto the beaches, larger vessels punctured seawalls, rocks and the artificial harbour at Omaha Beach was damaged, so that unloading there came to a complete halt. It was not until the afternoon of the 23rd that the Allies had repaired the damage so far that unloading on the beaches could begin again. 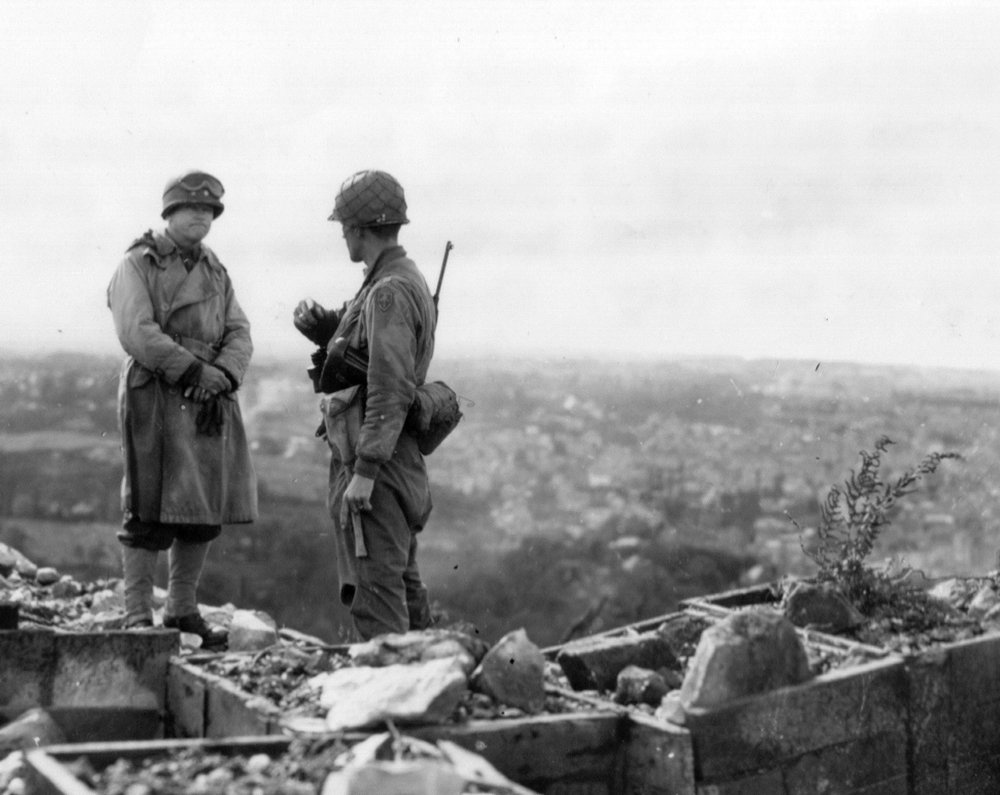 After making an unsuccessful radio attempt to get the Germans to surrender the city on the night of June 21, Collins began his direct assault on Cherbourg. He had requested bombardments – ‘pulverisation from the air’, as he called it – before the ground forces attacked. On the 22nd, shortly after noon, the planes came up. Four squadrons of Hawker Typhoons of the RAF’s 2nd Tactical Air Force made a rocket attack and then the city was whitewashed by six squadrons of Mustangs, which also belonged to the British tactical air force. Then 12 groups of fighter-bombers of the US 9th Air Force joined in, bombing and machine-gunning German positions in front of the American lines. The American planes attacked at five-minute intervals. When the ground forces moved in, all 11 groups of the US 9th Bomber Command attacked 11 defended points. 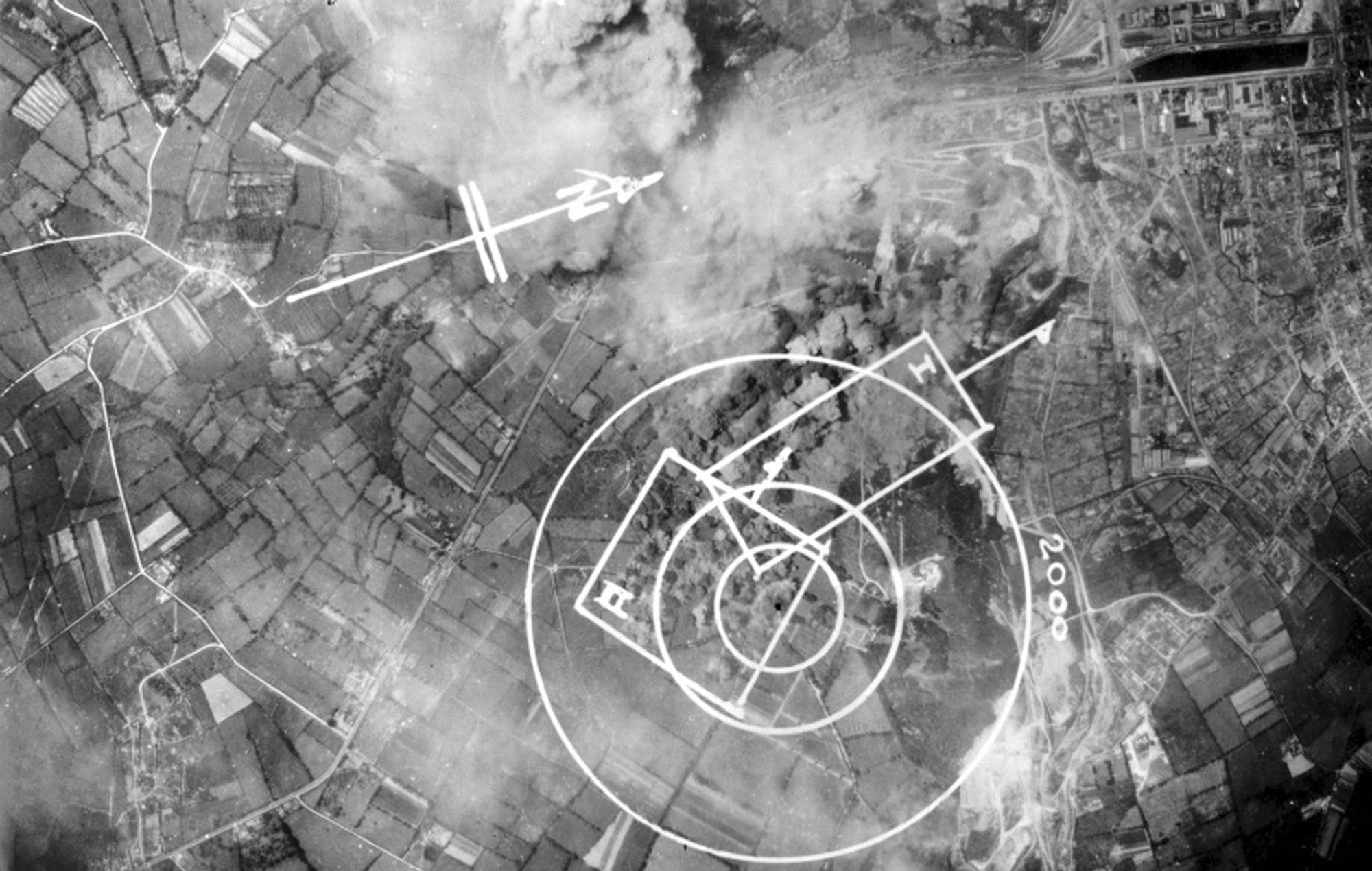 In all, about 1100 tons of bombs were dropped over a large area. Although the intensity of the bombardment was increased by artillery bombardment, the purpose of the air raid was rather to achieve the greatest possible demoralisation of the German troops, who were already in a hopeless position.

As the three American divisions advanced towards Cherbourg, von Schlieben received a hint from Hitler, which was not to be misunderstood. ‘Even under the worst conditions,’ Hitler said:

“It is your duty to continue to defend even the last bunker and to ensure that the enemy does not have a port in his hands, but a heap of rubble…. The German people and the whole world are following your battle. Your own honour and that of the German army are at stake.”

The siege of the city

On June 23, the Americans achieved significant penetrations into the German positions, and the next day von Schlieben reported that he had used all his reserves during the battle of Cherbourg and had ordered his troops to fight to the last cartridge. In his opinion, the fall of Cherbourg was inevitable. ‘It is only a question,’ he said in his telegram, ‘of whether it is possible to delay that fall by a few days.’

Despite the collapse of the Cherbourg defences, small groups in excellent individual positions continued to resist to the bitter end. To break the resistance General Bradley ordered a fleet bombardment of the Cherbourg batteries and at the same time a final ground attack on June 25. While three battleships, four cruisers and several destroyers bombed the coastal fortifications, the American ground forces closed in on the city.

“Loss of the city soon inevitable. 2000 wounded without the possibility of transporting them. Is destruction of the remaining troops necessary in the context of the big picture, given the impossibility of launching an effective counterattack? In addition to superiority in equipment and artillery, air forces and tanks, a heavy bombardment from the sea has begun. This bombardment is led by reconnaissance planes. I consider it my duty to bring to your attention that further sacrifices can change nothing.”

“You must continue the fight until the last cartridge, as the Führer has ordered.”

Fort-du-Roule, one of Cherbourg’s strongest fortifications, had two floors carved into a rock above the city. In the lower part were the coastal batteries, which covered the entire harbour; in the upper part were mortars and machine guns in concrete bunkers, which guarded the access roads to the city on the land side. The attack began on June 25. The fortress had to be taken position by position by small groups of men who showed a high degree of initiative and courage. Before midnight they had captured the upper bunkers with the mortars and machine guns. The next day, as armoured guns opened fire at close range, as a demolition party attacked with dynamite charges, and as a group of infantrymen blew up the lower positions by dropping explosive charges from above, the fort was captured.

That same day, von Schlieben sent a final message:
“Documents burned and codes destroyed.” He was captured with 800 men in an underground shelter. In the town hall 400 soldiers capitulated. An attack on the arsenal, planned for the morning of June 27, turned out to be unnecessary; a special team of a unit for psychological warfare convinced the defenders by means of radio transmissions that it would be better to surrender. 400 men laid down their arms there. The last harbour fort in the Cherbourg area capitulated on June 29 after heavy shelling by tanks and destroyers and attacks by bombers. By this time the American 7th Army Corps was up against 6,000 Germans who continued to defend the north-western corner of the Cotentin peninsula at Cap de la Hague. They finally surrendered on the last day of June.

Leave nothing for them…

The port of Cherbourg, the focus of the campaign, was in ruins. By June 7, German naval personnel had already begun systematically carrying out a programme of destruction which, according to an American engineer, was ‘a masterpiece; undoubtedly the most complete, intensive and best-prepared destruction in history’. The harbour was full of mines and blocked by sunken ships; quay walls had been destroyed, cranes blown up; the harbour dam had been partially swept away. For this thorough work Hitler awarded the Knight’s Cross to the Naval Commander of Normandy on the day after his capture; Hitler called his achievement ‘an unparalleled achievement in the annals of coastal defence’. 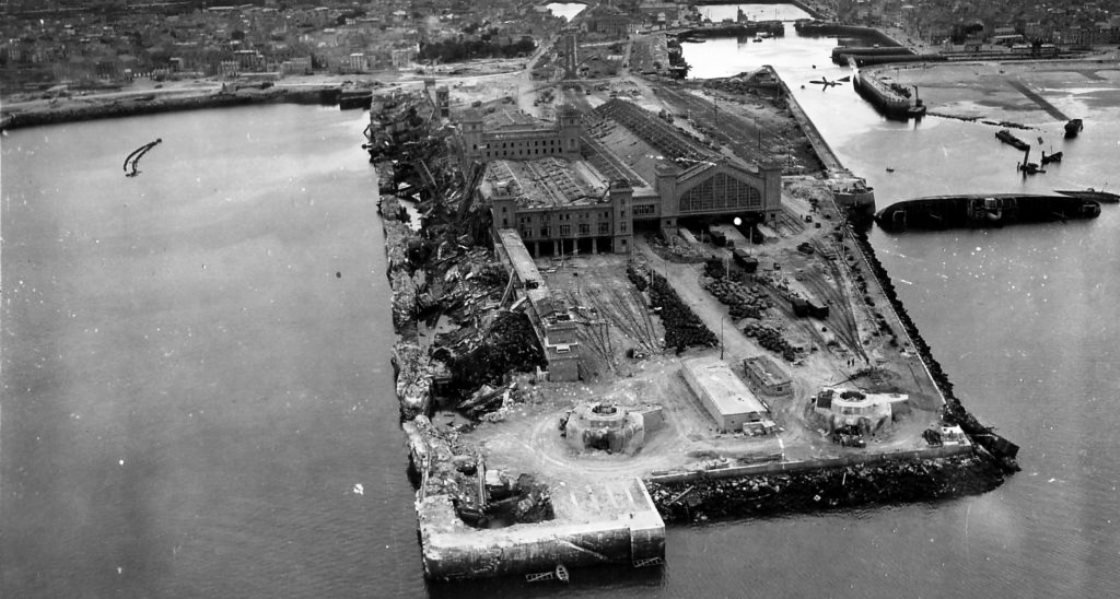 This picture is a good example to see how the Germans had systematically neutralised the functionality of the harbour.

It took the Americans nearly three weeks to restore the port to service, and even then it could only operate at partial capacity for months. Fortunately, the invasion beaches proved to be more suitable for the supply of goods than anyone had dared hope before the start of the invasion; until autumn, they overshadowed Cherbourg as a place of unloading.

The battle for Cherbourg and the Cotentin peninsula had cost the American 7th Army Corps about 22,000 men; 39,000 Germans were taken prisoner. The loss of Cherbourg damaged the morale of the German troops and improved that of the Allied troops. Since the Germans had destroyed the port facilities before the surrender, the Allies could not use the port immediately. After the battle of Cherbourg, the Army Corps rushed south to join the other elements of the 1st Army which were preparing to attack.