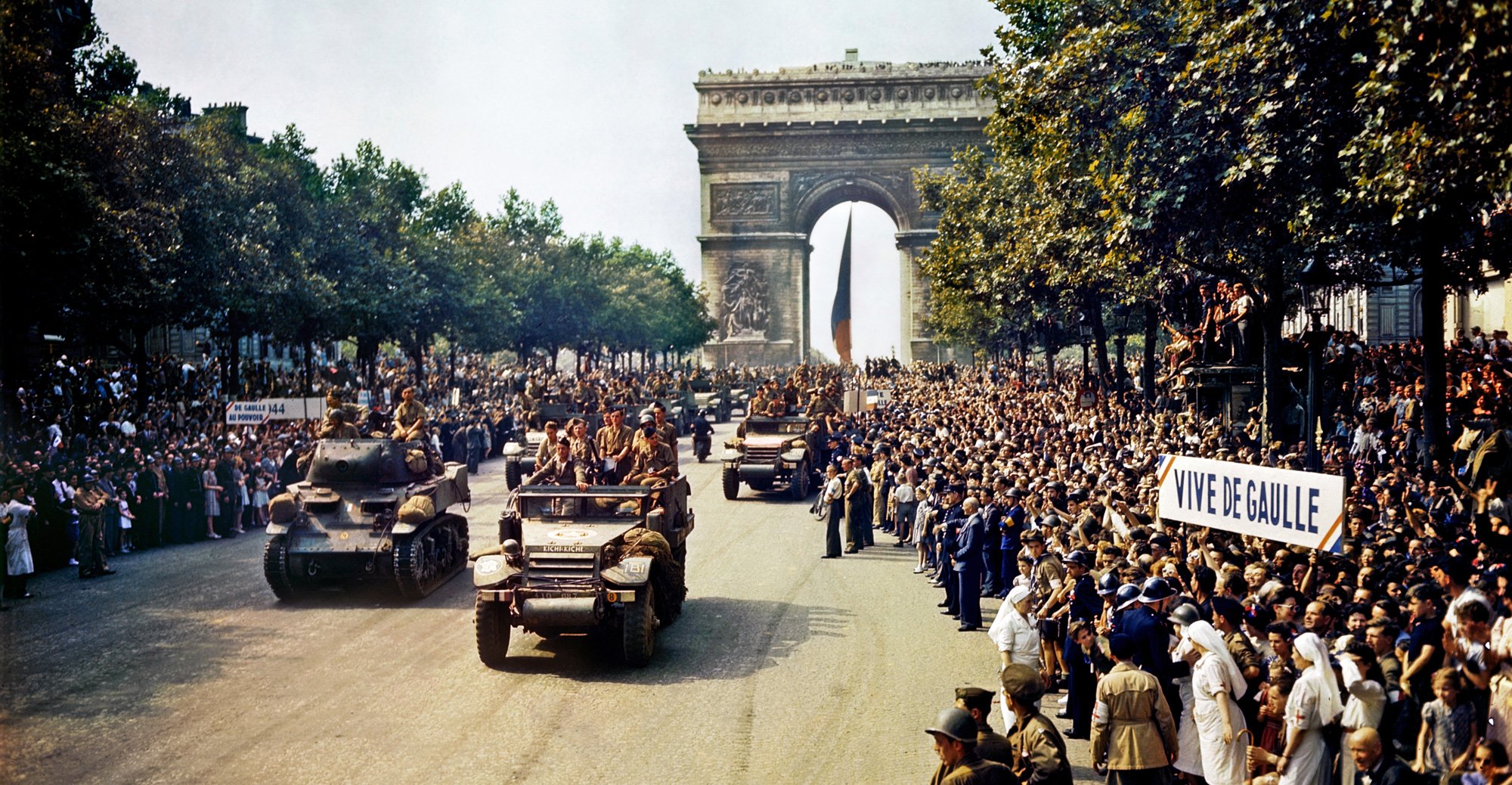 After the Allies surrounded the German forces in the pocket of Falaise, their next objective was the liberation of Paris. On August 15, the Paris metro and Paris police went on strike. The Allied battle plan envisaged encircling Paris in one circumferential movement to avoid city battles, which traditionally claimed many lives.

The next day, August 16, the postal services followed suit. On August 18, the strike was general in Paris, and barricades were erected. The city hall, Hôtel de Ville, was occupied by the resistance.

The liberation of Paris

The Allies were now forced by this uprising to revise their plan for the liberation of Paris. General Leclerc of the Second French Armoured Division was ordered to enter the city. The Americans gave credit to the French forces for liberating Paris after four years. After all, it was ‘their’ Paris.

The 2ème DB drove out of the Rambouillet forest in the morning of August 24. Leclerc sent a detachment of spahis marocains with their Stuart light tanks to Versailles as a diversionary tactic to convince the Germans that this was their main route of advance. The rest of Colonel Paul de Langlades tactical unit, accompanied by a squadron of the American 102nd Cavalry, was to advance through the Chevreuse Valley. However, they soon encountered resistance in the Bois de Meudon. The 12th Regiment Chasseurs d’Afrique lost three Shermans at the hands of anti-tank artillery. Their final objective was the Pont de Sèvres on the western outskirts of Paris.

It was a grey, rainy day, so wet in fact that it disrupted radio traffic. Colonel Billotte’s column was on its way to Arpajon and Longjumeau, while Colonel Dio’s tactical unit was kept in reserve. Billotte’s force was led by Commander Putz. During the Spanish Civil War, Putz had been one of the most respected commanders of the International Brigades. His 9ème Compagnie was called ‘la Nueve’ because it consisted almost exclusively of Spanish Republicans. The company commander, Captain Raymond Dronne, a red-haired, loyal follower with a powerful emblem, had been chosen because he was able to keep his Spanish socialists, communists and anarchists in check. 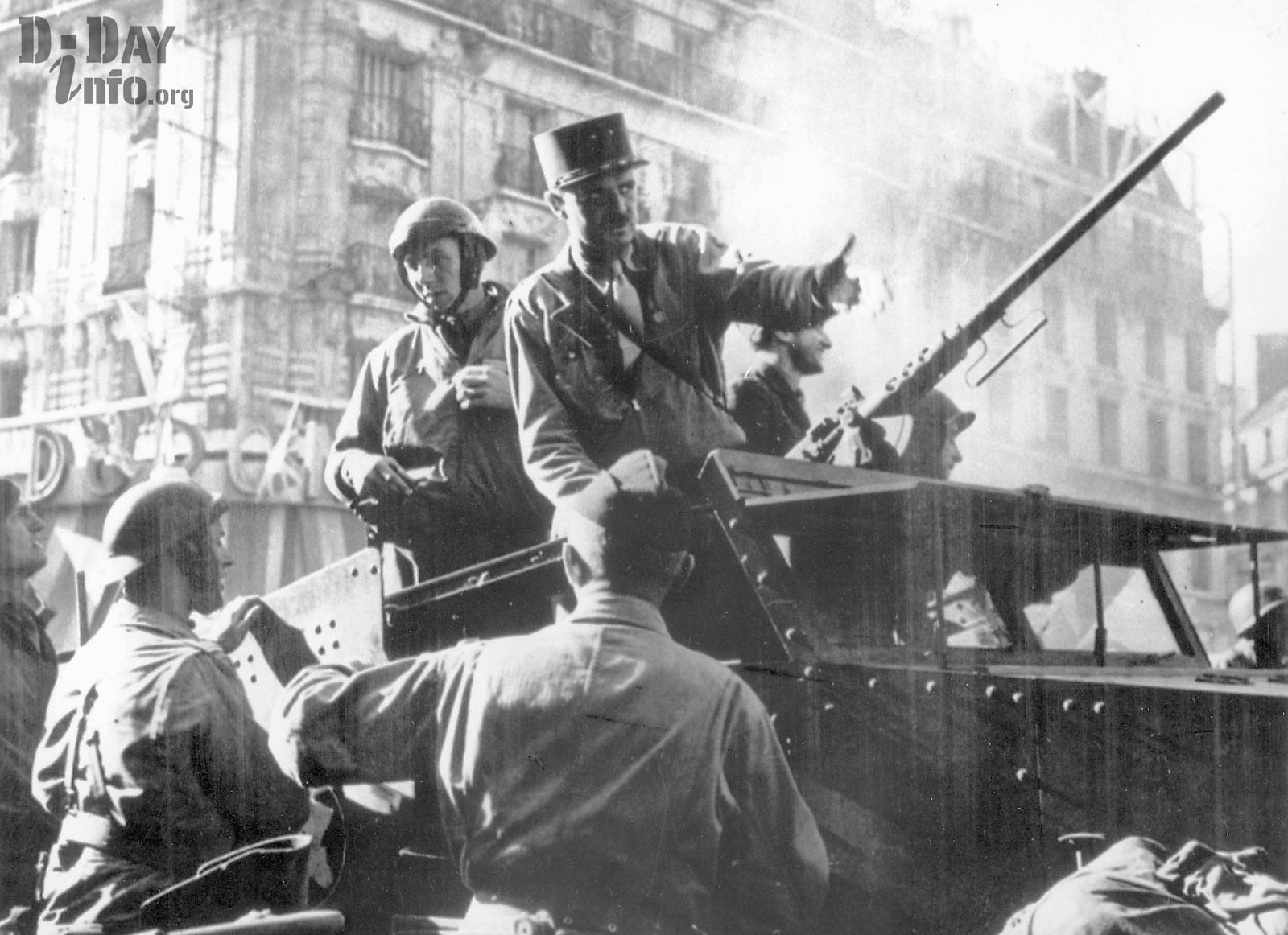 French General Jacques-Philippe Leclerc (on top of the armoured vehicle) during the liberation of Paris.

Outside, the townspeople crowded around the tanks and half-tracks. At first they were nervous, but when they saw the symbol of the division, a map of France with a Lotharingian cross through it, they went mad with joy and embraced and kissed the grey soldiers. Several people ran to nearby churches. Bells were rung and moments later the great bell of Notre-Dame, ‘Le Bourdon’, echoed across the city in the twilight. With tears of joy in her eyes, Colette, who was confined to her home, wrote of that memorable evening ‘when the night rose like the dawn’.

It was the sound of Le Bourdon’s chimes that finally won over the people of Paris. A refugee from Normandy was about to go to bed when she heard it. Moments later, the street filled with people shouting: ‘Ils sont là! (They are here!).

The inhabitants of Paris got out of bed the next day in an atmosphere of tense excitement. Many women had not slept and had sewn flags and made clothes in patriotic colours all night to greet the liberators. One woman who made an American flag had cut the stars one by one from an old dress.

Friday August 25, the feast day of France’s patron saint, Saint-Louis, became a beautiful sunny day after all those wet days, once the morning mist had lifted. Crowds gathered in the south-west of the city to welcome De Langlades troops. As news of the liberation of Paris spread, others swarmed to the Porte d’Orléans and the Porte d’Italie, where Commander Putz led Billotte’s column into Paris. This was followed by Leclerc, escorted by spahis in Staghound armoured cars. He was greeted by the Gaullist resistance leader Chaban-Delmas, after which they set off for the Gare de Montparnasse, which Leclerc, because of its good lines of communication, had designated as his command post.

The forward American elements of the 38th Reconnaissance Squadron and the 4th Infantry Division drove into Paris from the south at 7.30 a.m. They noticed that the people were confused. They noticed that the people were confused and afraid of them. They were not sure whether they were Americans or Germans. But once they were convinced of their identity, ‘the fun began’. The citizens helped clear the barricades to let them through. In less than an hour they stood before Notre-Dame. The American soldiers, who had been told that the Parisians were starving, thought they looked healthy. `Beautiful French girls climbed on our vehicles and gave us flowers,’ wrote a sergeant first class. Some of these girls had very fine teeth. They must have had good food somehow.’

They had slowly made their way through crowds who were screaming: Merci! Merci! Sank you, sank you! Vive l’Amérique!’ `Whenever we had to stop,’ recalled Colonel Luckett of the 12th Infantry Regiment, `mothers would lift their children up for kisses, young girls would embrace the grinning soldiers and shower them with kisses, old men would salute and young men would vigorously shake hands and pat the infantrymen on the back. Unlike their corps commander General Gerow, Luckett and his men did not seem to mind that the 2nd DB received the most attention. The 4th Infantry Division recognised that ‘Paris belonged to the French’.

On August 26, while German snipers were still active, a victory parade followed along the Champs-Élysées. This was followed on August 29 by another victory parade by the American 28th Infantry Division. By this time, the city was almost completely purged of German forces.

The losses among the resistance and the civilian population are estimated at 1500 persons.