The aim of Operation Bluecoat was to support the outbreak by the Americans in the west and to secure the road from Vire to Mont Pinçon.

The geographical objective of Operation Bluecoat was to secure the important road from Vire to Mont Pinçon. The strategic objective was to support the breakout by the Americans on the west flank in Normandy. This breakout was codenamed Operation Cobra. Because at the same time Operation Goodwood was launched by the British and Canadians, the Germans had to spread their troops. They chose to use the bulk of their troops to turn back Operation Goodwood. This operation took place south of Caen.

Because the Germans had placed the centre of gravity of their defence south of the city, the British Second Army, under command of Miles Dempsey, could not move further south. Therefore they moved west, towards the town of Villers-Bocage. The original date of the attack was to be August 2, but the rapid advance meant that the attack would take place earlier.

Initially, only two German infantry divisions attempted to hold back the attacks. To the south and east of Cumont both divisions were based. However, they had built a very efficient line of defence with mines and obstacles. In addition, they had the ideal terrain to defend, the hedgerow landscape.

I ordered Dempsey to abandon all caution and take as many risks as he wants, and accept as many casualties as necessary, and accelerate on the way to Vire.

On July 30, when the 4th Armoured Division was within striking distance of Avranches, Montgomery launched Operation Bluecoat. Normally Montgomery did not launch an offensive so hastily.

It seems that the initiative came from Dempsey again, but that did not stop Montgomery from saying that it was his plan. He sent Eisenhower a telegram.

With all those narrow roads, it was a nightmare to have to move two army corps from the Caen front to the far west of the British sector within 48 hours. Several units received their operational orders only as they approached the starting position.

Operation Bluecoat took place south of Caumont, where the British had taken over part of the front from the Americans. They had chosen this sector partly because there were no Ss-Panzerdivisions there. O’Connor’s 8th Corps would be led by the 15th (Scottish) Division and the Guards 6th Tank Brigade. The 11th Armoured Division and the Guards Armoured Division followed them and were ready to break through. To their left Bucknall’s 30th Corps with the 7th Armoured Division had to take Aunay-sur-Odon and then the massif of Mont Pirnion. The plan was to occupy the heights there to control the roads south of the ridge which the Germans would need for their retreat.

Sunday July 30 was such a scorching hot day that the infantry were allowed to attack in their shirtsleeves, but at least the clear skies made air support possible. Operation Bluecoat, like Operation Cobra, was also preceded by a bombardment attack and heavy artillery fire. The 25th Scottish got off to a good start, attacking across a narrow front. When their advance was held up by the German 326th Infantry, the supporting tanks of the 4th Coldstream and 3rd Scots Guards pushed through. Their commanders ordered the infantry to follow in their tracks. This was against British Army doctrine, but the commanders of the 6th Guards Tank Brigade and 15th Scottish had agreed before the battle to do so if necessary. 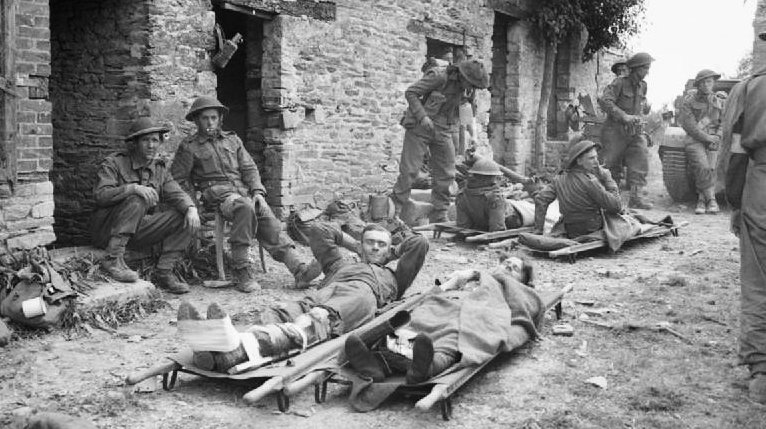 German and British wounded soldiers at a care post in Caumont - July 31, 1944

The Germans react too late

The Germans were unusually slow to react. When Eberbach finally realised the danger, he ordered the 21Ste Panzerdivision to cross the Orne and join the battle. Meanwhile, the 326th Infantry Division made desperate counter-attacks on the two hills, killing Brigadier Drabich-Wächter, their commander. At one point they succeeded in getting the Coldstream and Glasgow Highlanders off the hill, but moments later the British retook it in a counter-attack. 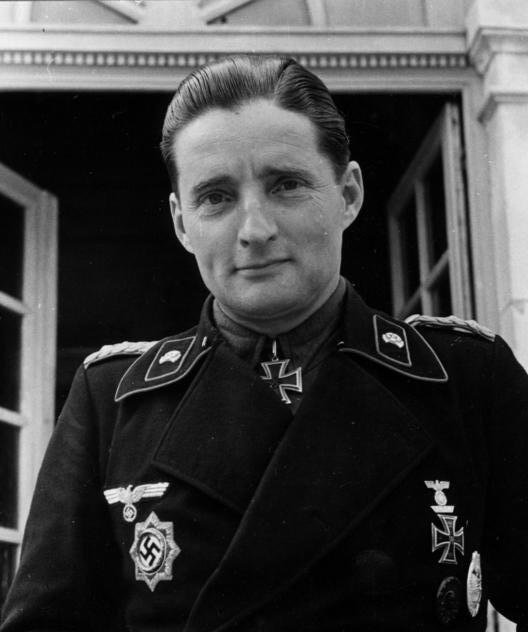 Because the 30th Corps failed to advance on the left when it was stopped by a stream with steep banks, the 8th’s wing was completely open. Here Eberbach wanted to attack, but once Colonel Oppeln-Bronikowski had gathered the 21st Panzer Division, the counterattack came too late. It went into the attack at 06:00 on August 1 with three panzer-grenadier battalions, each reduced to 200 men, the last fourteen Mark IV tanks of the 1st Battalion of its Panzer Regiment and the last eight Tigers of the 305th Heavy Panzer Battalion. The British counterattacked and reached the command post of the 21st Panzer Division. The headquarters staff had to flee, leaving all vehicles behind. The 21st Panzerdivision lost almost a third of its fighting power and withdrew. At the corps headquarters, a furious row broke out over this failure.

The Americans are overtaken

A platoon of armoured cars of the 2nd Household Cavalry Regiment managed to slip through the German lines in the Forét de l’Evéque on July 31. About 10 kilometres further on they discovered that the bridge over the Souleuvre was still intact. They quickly made short work of the only guard. The bridge was on the border between the German 326th and 3rd Airborne Division, and that was probably why nobody took responsibility for it. When they reported their discovery, the commanding officer of the Household Cavalry could hardly believe it and asked them to confirm their position. He immediately informed Major General ‘Pip’ Roberts of the 11th Armoured Division. Although the route was west of their line of advance and in the sector of the American 5th Corps, Roberts sent in the 29th Armoured Brigade at full speed, with infantrymen on tanks to secure the crossing. It was already known as ‘Dickie’s Bridge’ after the platoon leader, Lieutenant D.B. Powle, who had captured it. Roberts then asked O’Connor for permission to change his axis. This spectacular advance, which took the 11th Armoured Division all the way to the heights around Le Bény-Bocage, forced General Meindl to withdraw his 3rd Airborne Division.

Just over 50 kilometres south-west of that, just before sunset on July 30, the first tanks of Wood’s 4th Armoured Division drove into Avranches, the gateway to Brittany and central France. The town was in chaos. 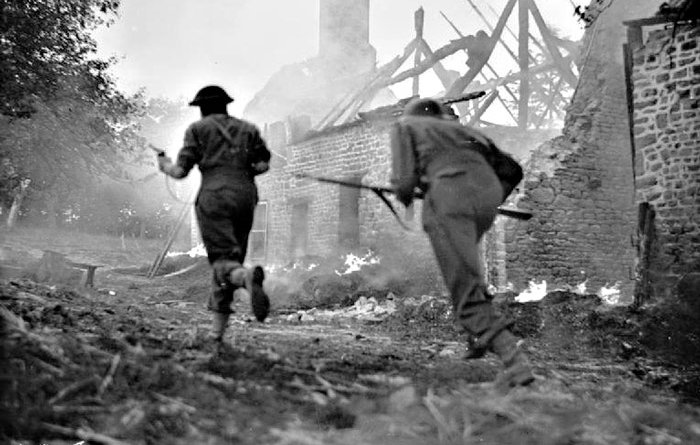 The Germans are demoralised

On July 31, Field Marshal Von Kluge received a call at 01.00 a.m. from Major General Speidel, the chief of staff of Army Group B. Speidel warned the commander-in-chief of the west that the 82nd Corps had fallen back towards Villedieu, but that they could not get in touch with it. The situation is extremely serious. The fighting power of the troops has been greatly reduced.’ The High Command, he added, had to be told that the left flank had collapsed. Brittany and the ports on the west coast were clearly in danger. Many soldiers and officers would have expressed it more forcefully. They described the feeling of disaster as ‘Weltuntergangsstimmung’ – the feeling that their whole world was collapsing. American divisions pushed the Germans back across the Vire on the left wing of the breakthrough.

The 6th Armoured Division also advanced through the breach at Avranches. The tank crews had been eager to fire in their first actions when they saw a group of Germans, no matter how insignificant. But when thirty Germans emerged from behind a hedge with their hands in the air, they had to take them, as they could not spare a man. They made them sit on the bonnets of semi-trucks and jeeps. Our boys got their souvenirs that day,’ an officer remarked. Their vanguard consisted of a company of tanks, a company of infantry in semi-tracked vehicles, a battery of field artillery, a company of anti-tank vehicles, a section of engineers in semi-tracked vehicles to deal with the mines and a scouting section. They advanced at a speed of well over 20 kilometres an hour, occasionally catching up with Germans who were cycling or walking unsuspectingly. The crews of the Shermans loaded everything that was not essential onto the outside of the tank.

To make matters worse, the Germans faced increasing resistance attacks further south. In Les Landes, a train without 69 wagons, carrying much-needed artillery ammunition, had just been blown up, and in a tunnel north of Souillac, an armoured train had derailed.

Von Kluge was with Hausser and his new chief of staff, Brigadier General Gersdorff, in the forward headquarters of the Seventh Army on August 1 when they heard that the Americans had taken Avranches. According to his aide, First Lieutenant Tangermann, he said: ‘Gentlemen, this breakthrough means the beginning of a decisive and bitter end for us and the German people. I see no possibility of stopping this continuing offensive’.

Von Kluge warned that the entire front, including the British sector, would collapse with the withdrawal of Panzer divisions. Instead, he proposed to withdraw German forces behind the Seine and abandon western France altogether. The Panzerdivisions could protect the retreat of the infantry divisions without motorised transport. Hitler furiously rejected this plan and insisted that they would eventually prevail if his orders were followed. Von Kluge felt that this was a catastrophic decision, but he could do nothing against it. 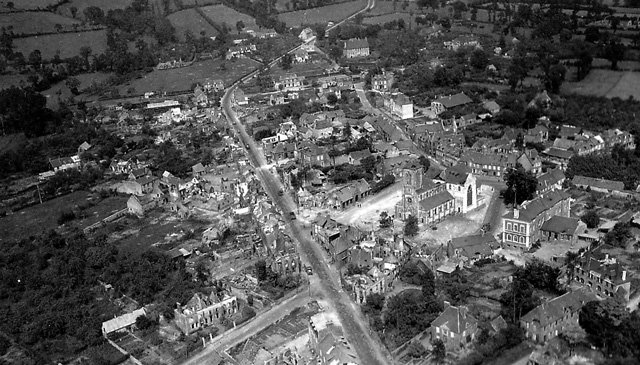 The Americans encountered much fiercer German resistance on the left as they fought hard around Percy and Villedieu, around which the 3rd Armoured Division had moved. The 4th Infantry Division deployed four artillery battalions to attack the German positions. The 155 mm ‘Long Toms’ fired a total of three ‘serenades’, the heaviest bombardment they had at their disposal, which finally silenced the German guns. The reconnaissance squadron of the 4th Division moved into Villedieu in the late afternoon.

The front troops behaved, during Operation Bluecoat, with particular disregard for the large numbers of prisoners of war they were taking. Middleton’s 8th Corps had made 7,000 prisoners in just three days, out of a total of 20,000 prisoners in six hunts throughout the First Army. When a battalion of the 8th Infantry Division captured a few hundred Germans, they sent them to the rear with only one guard. Sometimes they gave the Polish or Russian prisoners of war back their weapons and let them escort the Germans, so that several of the latter most probably did not reach the prison yard alive. 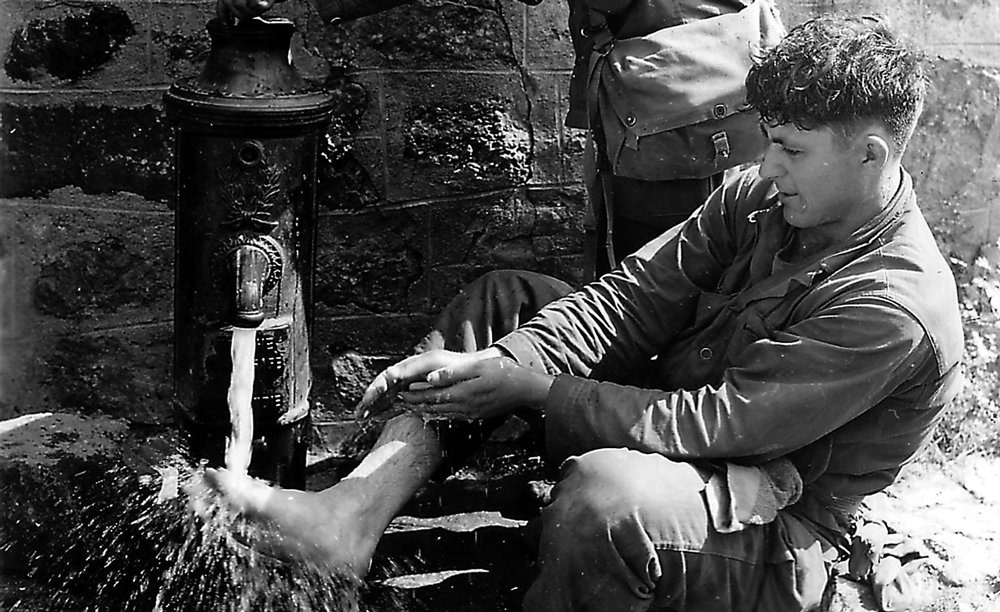 The liberation of Villedieu: American soldiers enter the village. Refugeed civilians also return to their homes.

On August 3, Major General John Wood’s 4th Armoured Division swung south around the western edge of Rennes. With little fuel and ammunition left, he could not take the city but he had now sealed off the whole Brittany peninsula. He turned his attention to the east and understood that the Germans did not have reserves to stop a direct attack to Paris and the Seine. Eisenhower and Bradley both came to the same conclusion. This was an opportunity that you rarely get in a war.

The end of Operation Bluecoat

The British were given support to continue their advance. The British 7th Corps, in addition to advancing, had to cover its own eastern flank, as the British 30th Corps had not penetrated to the same depth. The advance was temporarily halted on August 4. After renewed efforts to push forward, the British, together with the Americans, captured Vire on August 6. On the same day the British 43rd Infantry Division captured Mont Pinçon. August 7 was officially marked as the end of Operation Bluecoat.