287,000 men and countless armoured vehicles boarded countless ships, ready to leave for Normandy, on the day before D-day.

Americans attend a Protestant service before the landings.
Share this page
Related tags
5 juniBeforeEmbarkmentPreludePreparationWaiting
Print page
Save as bookmark

On the day before D-day, the sun rose at two minutes to six, it said on the calendar, but there was not much difference between the dark, stormy night and the grey, rough dawn. The Channel was a wildly moving chaos of steel-grey, white-stained waves, testing the sailors’ skill and stirring the stomachs of the landlubbers in the small ships. Shreds of clouds drifted along the cold air. A fierce wind blew the foam into the faces of the watchers as numerous small ships pounded and swayed towards their rendezvous. By sunrise, 5,000 ships of about fifty different shapes and sizes had dropped anchor, and in the coastal waters of Britain between Fowey and The Nore, many convoys were already underway. It had been four years since the remnants of an army had been evacuated from Dunkirk and had seen a similar level of activity in the coastal waters of England. The command then lay in the hands of Admiral Ramsay; this morning too the command for Operation Neptune lay in his hands.

The waiting during the day before D-day

The day before D-day meant different things to many people. 287,000 men and countless armoured vehicles had boarded the ships, some of them already in the first days of the month. Some of them had been cut off from the outside world for some time; they saw no sky and no sea, no daylight and no darkness. They felt sick and they were tired and thousands of thoughts ran through their heads. They knew that the time would come when they would be spat out on a strange coast full of deadly elements, a coast that would be under a murderous fire. 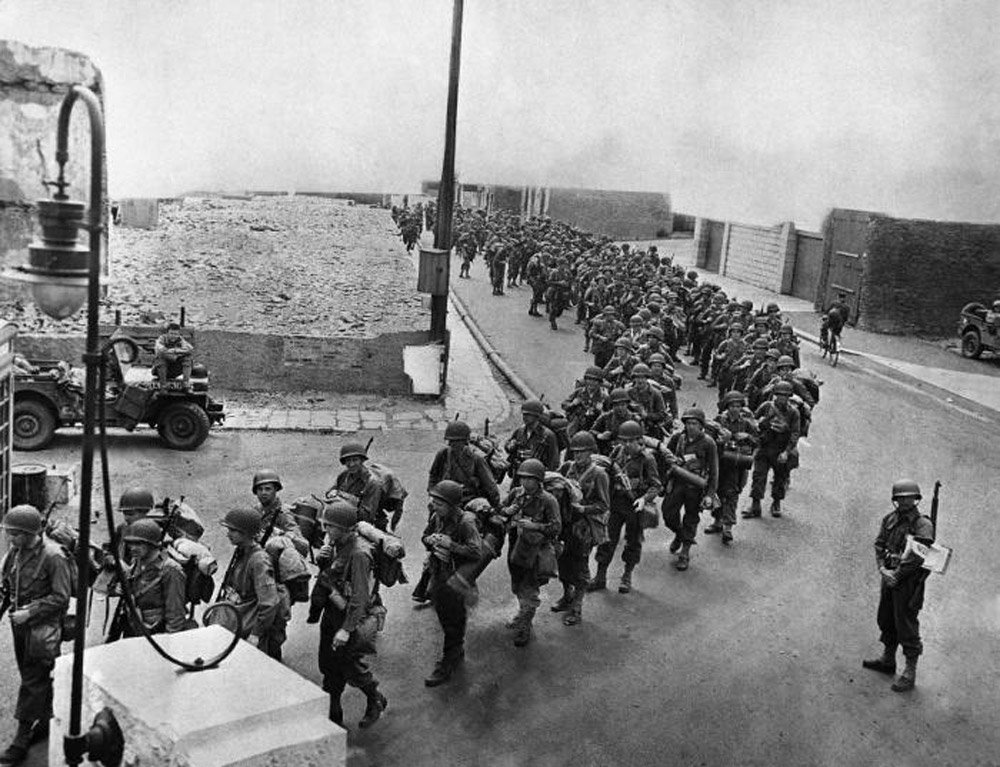 Americans march to their landing craft.

The many thousands on deck were lucky, even though they still felt so sick and cold, that they were not among the many thousands below, in the great hollows of the LCT’s (Landing Crafts, Tank), in the cramped space of the LSI’s (Landing Ships, Infantry), in the dull light of an electric lamp, in the stench of vomit.

While thousands waited in a bleak foreboding, thousands more worked on the small and large warships. They were vigilant in hundreds of gun turrets, sitting on their swivel chairs behind a mighty arsenal of weapons, pointed threateningly at the sky. The height of the clouds was 1300 metres. Above them, the thunder of 10,000 planes sounded incessantly. Hundreds more struggled with tow ropes as the tugs in the wake of the terrific armada assembled south of ‘The Isle of Wight’ dragged strange, unwieldy structures out of the artificial Mublerry harbours.

Towards evening there was some improvement in the weather and in that brief interval one of the soldiers wrote:

“It was a perfect summer evening, Wight lay green and invitingly glistening in the sea, and it seemed seductively peaceful behind the endless succession of warships.”

Americans board a USS Bayfield for D-day.

In the falling darkness, as the convoys set out to meet disaster, men cheered each other across the water. Flags flew on board the warships and a British admiral threw his cap in the air. But it was a parody of the truth for thousands who thought they were in the bleak court of death, who felt the dull sensation of nausea only to accentuate the long, unbearable wait. Force U2a, part of Force U for Utah, knew a thing or two about it. 128 LCTs, packed with men and armoured vehicles, left a port on the west side of England, headed east across the Channel, turned right and had to fight the storm to seek shelter in Weymouth Bay and the lee of Portsmouth. At dusk on June 5 they again headed east across the Channel, this time towards the French coast.

Force 0 off Omaha had also had a long journey from the south-west, had been turned round and round again because of the weather and it seemed to the men as if the hours of confinement would never end. There were men on deck who had been on watch for 50 hours and it might be another 50 hours before they could go to sleep.