Pointe du Hoc was an important German position during D-Day, located between Omaha Beach and Utah Beach, for which it posed a threat.

German prisoners are escorted to the boats.
Share this page
Related tags
CannonsCliffsCratersLaddersPointe du HocRangersRockRudderTouwen
Print page
Save as bookmark

Pointe du Hoc is located on a cliff between Omaha Beach and Grandcamp-Maisy. The cliff is about 30 metres high, on the right side in front of the cliff is a small piece of pebble beach. The Germans built a large bunker complex with six casemates on this cliff and placed six captured French 155 mm guns there to defend the landing beaches. This location was perfect to defend both Omaha Beach and Utah Beach, as the guns had a range of 25 kilometres. Reason enough for the Allies to have this location in their hands before the invasion started. 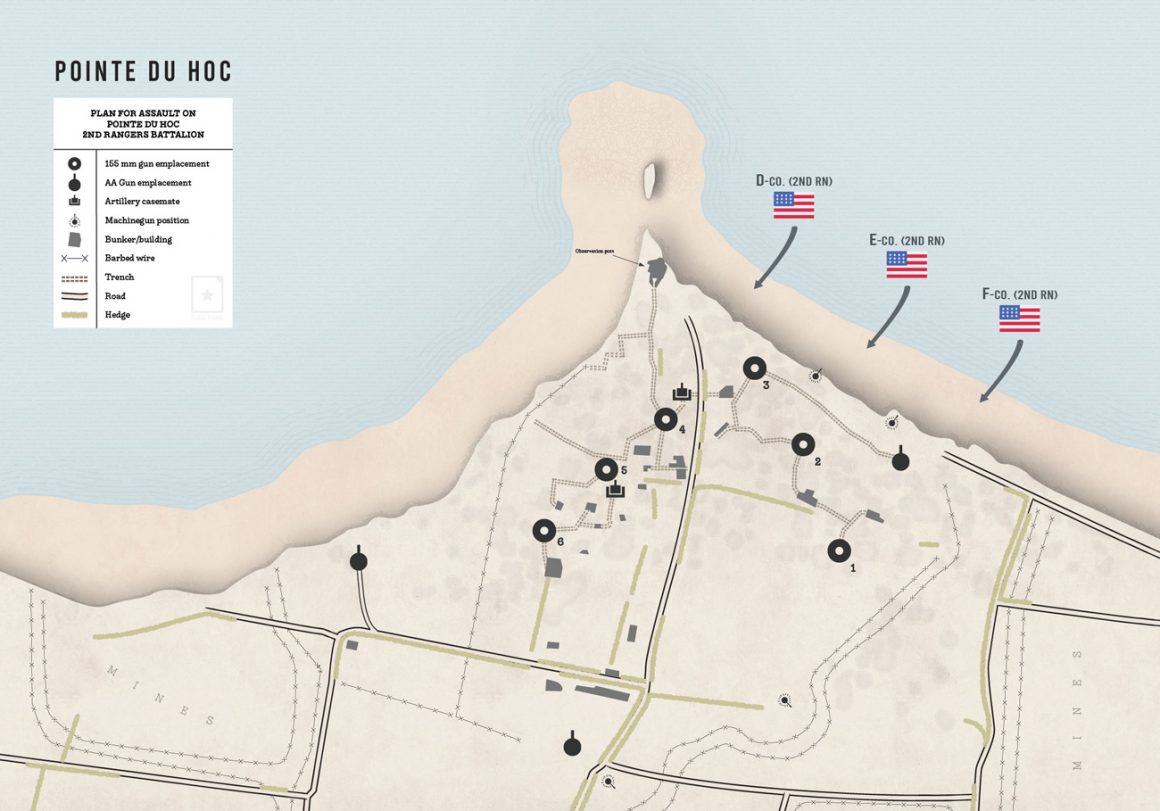 Map of Pointe du Hoc
Would you like to buy this map as a poster? 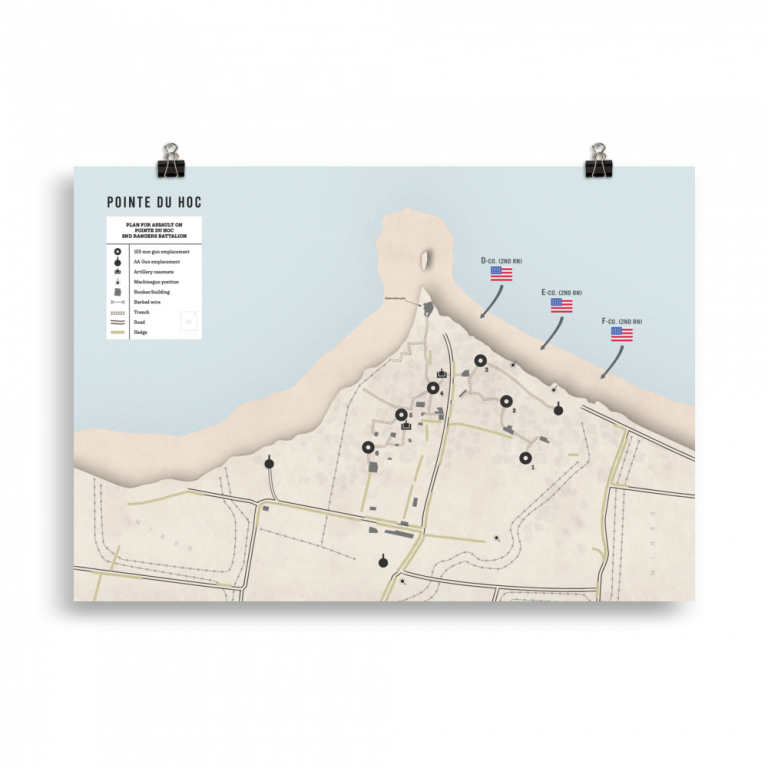 Despite several air and sea bombardments, the Allies found that the location was too strong and had to be taken by ground troops. This difficult mission was entrusted to the US 2nd Rangers Battalion, commanded by Major Cleveland Lytle. However, he was replaced at the last minute by Lieutenant Colonel James Earl Rudder after Lytle claimed during a briefing that the guns had been moved, according to unofficial French sources. The army command decided that Lytle could not perform a task he did not believe in. The unit, which consisted of about 225 Rangers, had to take this complex and destroy the guns. They practised taking the cliffs on the Isle of Wight under the guidance of British commandos.

To facilitate the task, Pointe du Hoc was bombed several times in the days before June 6, and not without success, because on June 3 the Germans moved their 155 mm guns further inland. However, the Allies did not know this. The Germans had replaced the guns with wooden logs, so Allied reconnaissance aircraft assumed the guns were still there.

Around 5.45 am the battleship ‘USS Texas’ took Pointe du Hoc under heavy fire. Meanwhile the Rangers manned their 10 landingboats, about 20 kilometres from the coast. They were accompanied by two supply boats and four DUKW amphibious vehicles which carried the ladders they had commandeered from the London Fire Brigade. One landing craft with troops sank on the way to the coast, only one soldier survived the disaster.

Another ship was swamped. One of the ships carrying supplies sank and the other threw its supplies overboard so that they would not sink either. German fire also sank one DUKW amphibious vehicle. When they were within a mile of the coast, heavy German fire came from mortars and machine guns. Due to a navigational error, the losses were greater than expected and the element of surprise was now completely gone. 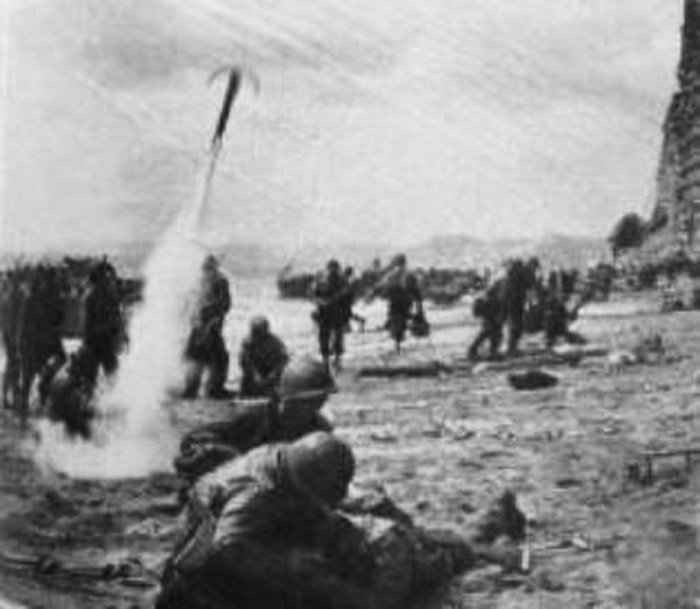 Example of a grappling hook being shot upwards.

The landing on Pointe du Hoc

Around 7.00 hours the Rangers started their difficult climb to the top, using rope ladders and grappling hooks. The ‘USS Satterlee’ and the ‘HMS Talybont’ took the Germans under fire on the cliffs, so they could no longer fire on the Rangers climbing up. Led by Lt. P.C. Johnson, who reached the top first, the ships were signalled to stop the fire.

The first men reached the top after fifteen minutes where they started to fight the enemy. At 7.45 am the message ‘Praise the Lord’ was broadcast as a sign that all men had reached the cliff.

The Rangers discovered that the 155 mm guns were not in the casemates. The Germans also created a deception by placing telephone poles with camouflage netting over them which were supposed to look like cannons. In the meantime it all seemed to have been a useless operation.

The Battles on the Cliffs

Individual battles with Germans took place everywhere. From a pillbox in the far west of Pointe du Hoc, the allies were constantly under fire. The Rangers made several attempts to attack it, but the Germans were defeated every time. This position caused many deaths and injuries, even lieutenant colonel Rudder was wounded. To the east was a nasty machine gun nest in the edge of the cliff, which was completely destroyed by a navy ship. Lieutenant-Colonel Rudder set up his headquarters in a bunker in the eastern part of Pointe du Hoc. 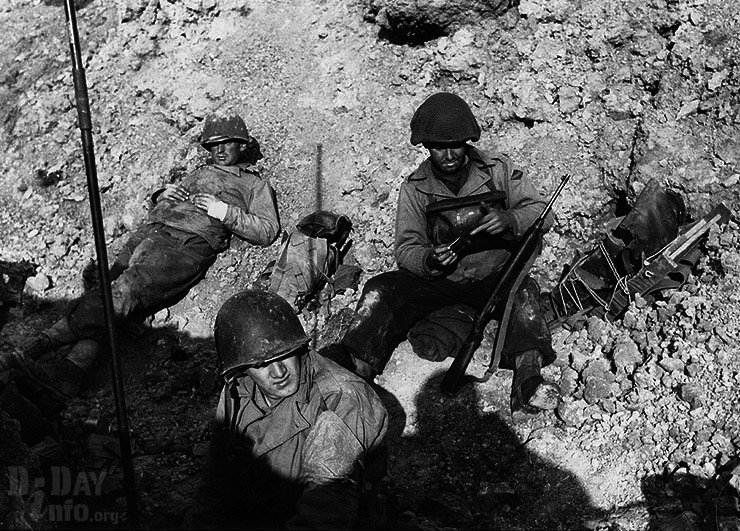 Three Rangers rest after the fight.

Because of the loss of time and the delayed signal from the Rangers at Pointe du Hoc, the initial reinforcements were forced to land on the Charlie sector of Omaha Beach. The Germans put up more resistance than expected and were able to hold off the first Allied wave of attack earlier in the morning. The 5th Rangers Company A, B and C, under command of Lieutenant-Colonel Max Schneider, decided to land further east in sector Dog Red, a decision that would save the lives of hundreds of soldiers. Only 6 of the 450 soldiers did not survive the landing. The 2nd Rangers Company C came ashore west of Dog Red. 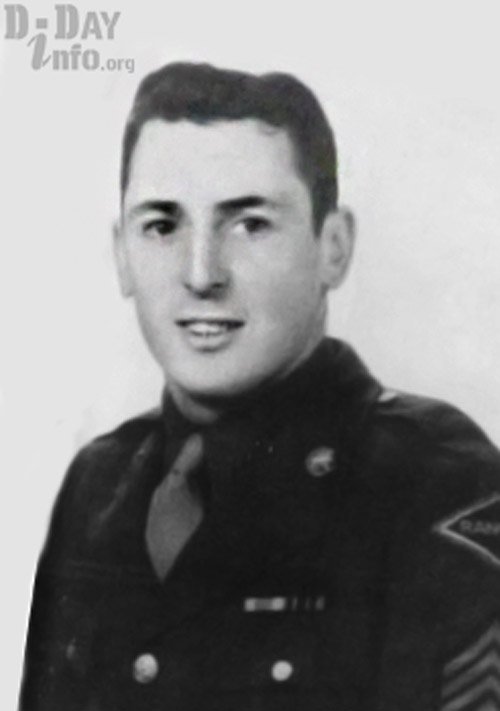 The rearguard of Pointe du Hoc

Meanwhile 36 soldiers of the C and D Company moved to the present D514 main road, south of Pointe du Hoc, where they were reinforced by 12 soldiers of the F Company around 8.30 am. They took up positions around the road leading to Grandcamp-Maisy and patrols went on reconnaissance. They found around 9 am the five of the six 155mm guns in an orchard still in use. Next to the guns were bombs ready to be fired on Utah Beach. Sergeant Leonard Bud Lomell found these guns and made all five of them harmless and in doing so probably saved the lives of countless Americans.

However, the battle was not yet over. The Germans regrouped and counterattacked repeatedly. More and more men were lost. Lieutenant-Colonel Rudder sent a radio message saying ‘mission accomplished, ammunition and reinforcements needed, many casualties’. Unfortunately, from General Clarence Huebner, the message came back that reinforcements were not available.

Soldiers Goodgal and Crouch of the 506th PIR, 101st Airborne Division landed all wrong with their parachute and had come down at the sound of fighting to join the Rangers. Still later Lieutenant Charles H. Parker Jr. joined them with 23 men of A Company. They had landed in the morning on Omaha Beach and had fought their way to their comrades at Pointe du Hoc. They were carrying about twenty German prisoners.

The fighting continued on June 7. The Rangers were isolated for two days and had to fight off several German attacks to keep control over Pointe du Hoc. Around noon food and ammunition was brought from the USS Texas, unfortunately the wounded could not be evacuated because of the rough sea. The Germans gradually withdrew along the river Aure, south of the N13. Reinforcements arrived on June 8, just before noon. The 5th Rangers Battalion and the 1st Battalion 116th brigade came via Omaha Beach to Pointe du Hoc. Of the 225 Rangers, 135 were killed, wounded or missing.