Operation Neptune, the naval component for Operation Overlord, was set up to launch a successful crossing from southern England to Normandy. 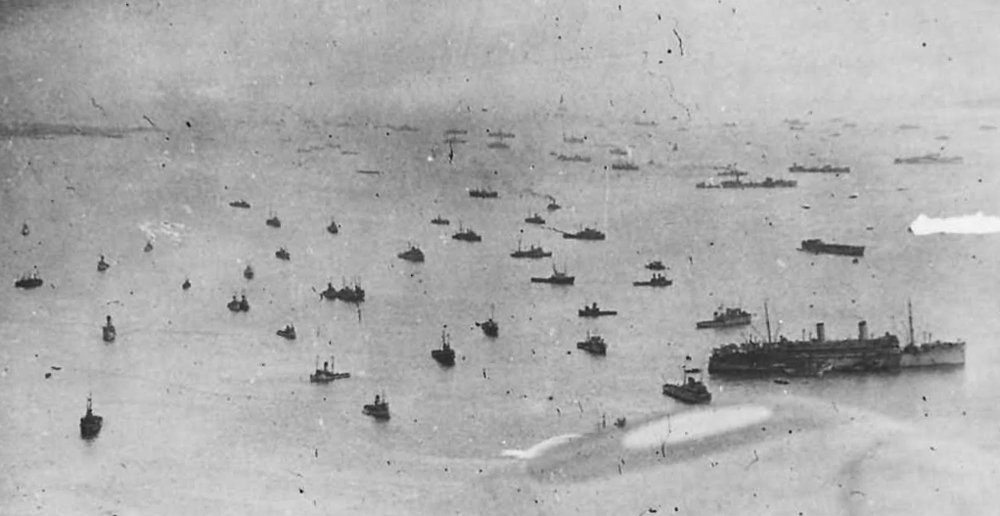 The Allied armada on its way to the beaches of Normandy.
Share this page
Related tags
armadaattackChannelfleetNeptuneplan
Print page
Save as bookmark

On 1 February, Montgomery, Ramsay and Leigh-Mallory drew up the Initial Joint Plan, Operation Neptune, ‘an executive instrument’ relating to the expansion of Overlord. The air forces had already begun ‘the preparatory phases of the battle. The Navy had begun administrative planning in 1942, and the whole framework of the extensive task of Navy transport, attack and ‘defence had already been worked out in detail. Adjustment and expansion of those plans would continue until D-Day, and even beyond. The armies involved faced an unimaginable task. The American 1st Army and the British 2nd Army, reporting to the headquarters of the 21st Army Group, completed their attack plans on February 25 and March 20 respectively. From then on, detailed plans could be drawn up at all levels, with the `Q’ staffs doing most of the work.

By the end of the first week of April Montgomery, together with the commanders of the air and naval forces, was able to present the complete plans of Operation Neptune to his General Officers and to discuss further with his senior officers in the field the various possibilities. He expressed his intentions as follows:

” At the same time attack the beaches on the coast of Normandy, located north of the mouth of the Carentan and between Carentan and the Orne, with the aim of capturing a lodgement area as a base for further operations. ”

In this lodgement area the airfields (south-east of Caen) and the important port of Cherbourg were to be captured. Montgomery explained that his intention was to build up opportunities for a breakout on the eastern flank, and to draw the bulk of the enemy reserves and strength towards the British and Canadian Army units. Once he had established a firm fulcrum at Caen and fully engaged the enemy on the eastern flank, he would have American troops under Bradley’s command break out to cut off all enemy forces south of the Seine. Even bridges that ran over the Seine had to be destroyed by bombers to stop the enemy.

The US 1st Army, which had three regimental battle groups, was to attack on either side of the Douve Estuary. It was to capture Cherbourg and extend the attack further south towards St. Ló to join up with the British 2nd Army. The British 2nd Army, five brigades strong, would attack between Asnelles and Ouistreham, with the Canadians in the centre, to form a bridgehead south of the St.-Ló and Caen line. It would also attack south-east of Caen to capture airfields and protect the American 1st Army’s eastern flank. Both armies would be supported by American special engineer divisions, tanks, commandos and Rangers. 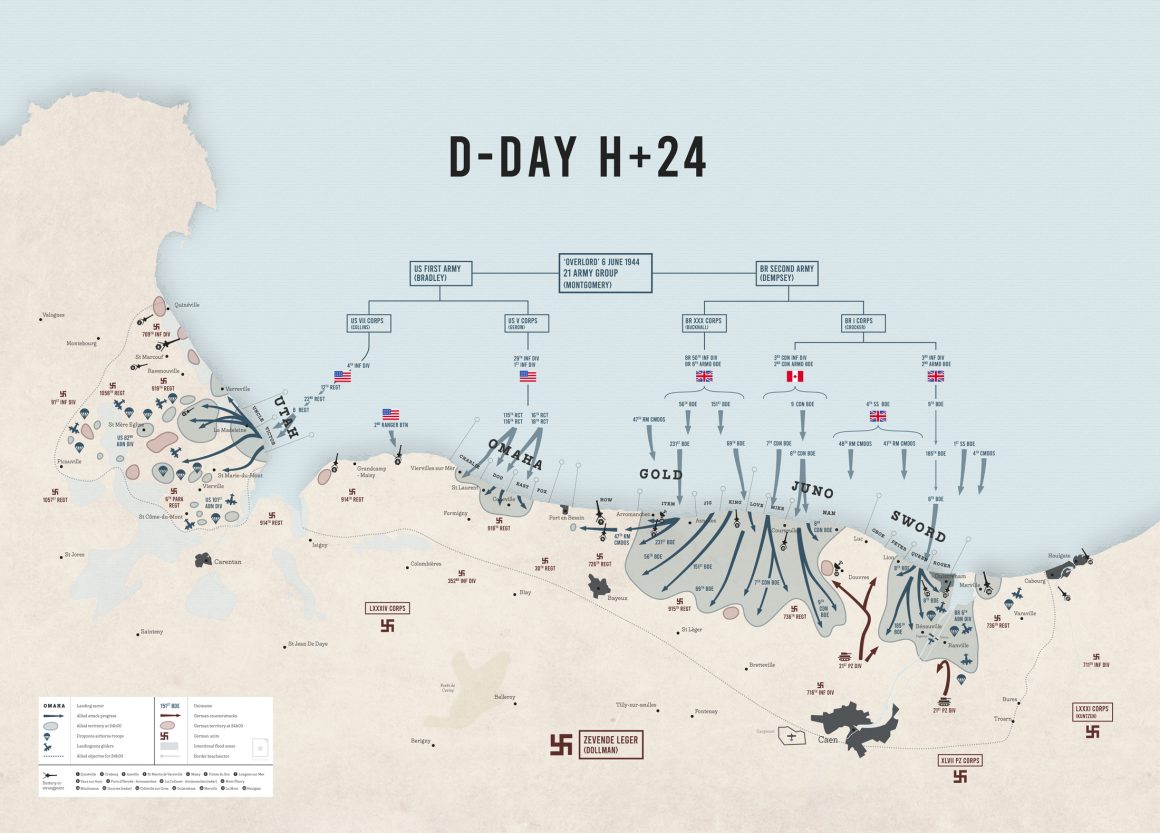 View map
Would you like to buy this map as a poster? 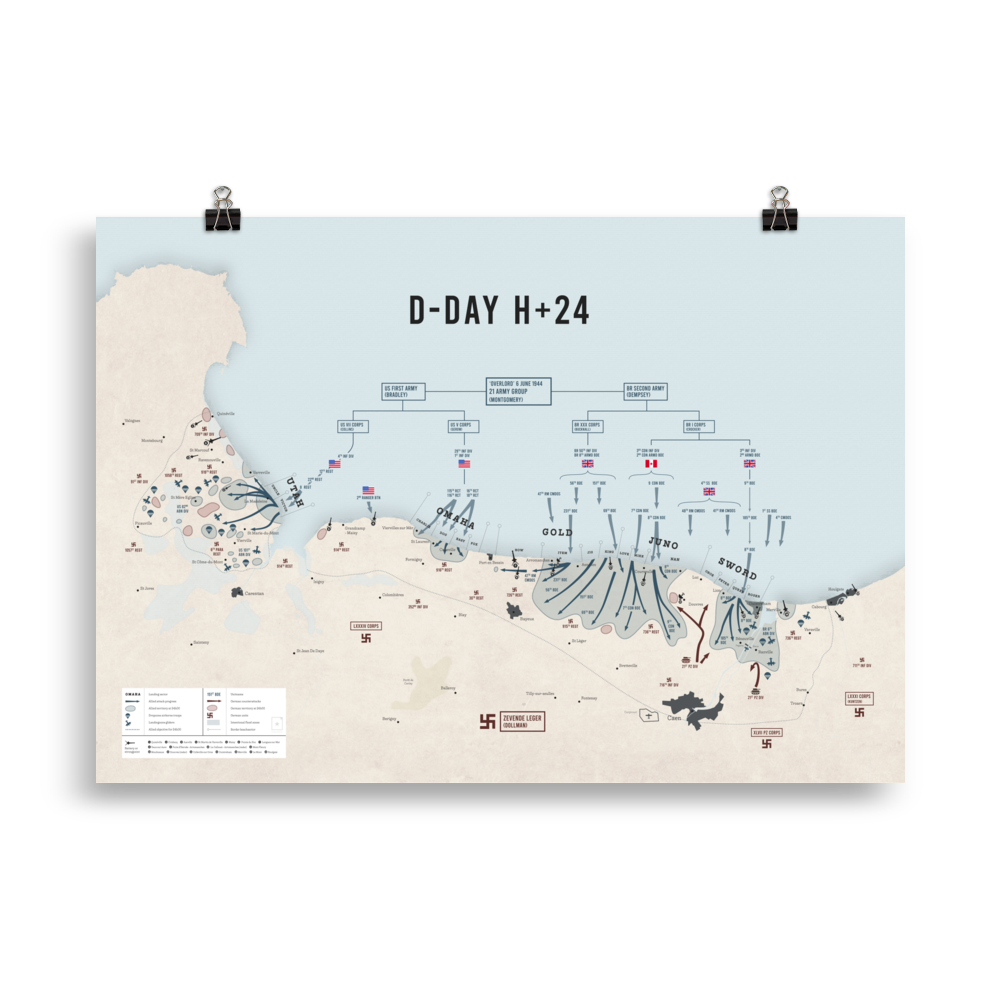 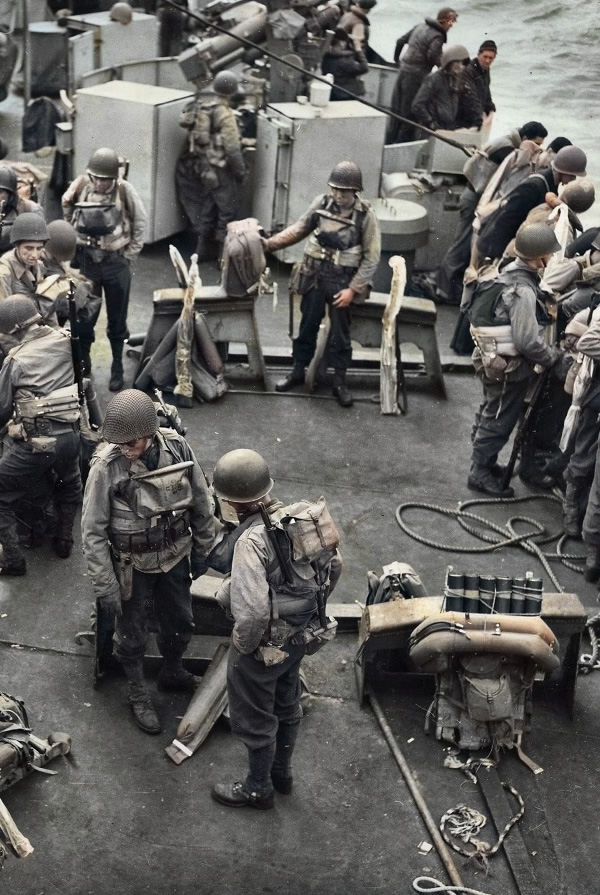 American soldiers, hardened and ready, lounge under full fighting equipment on the deck of a Coast Guard assault transport in the fateful trip across the English Channel.

Would you like to buy this photo as a poster? 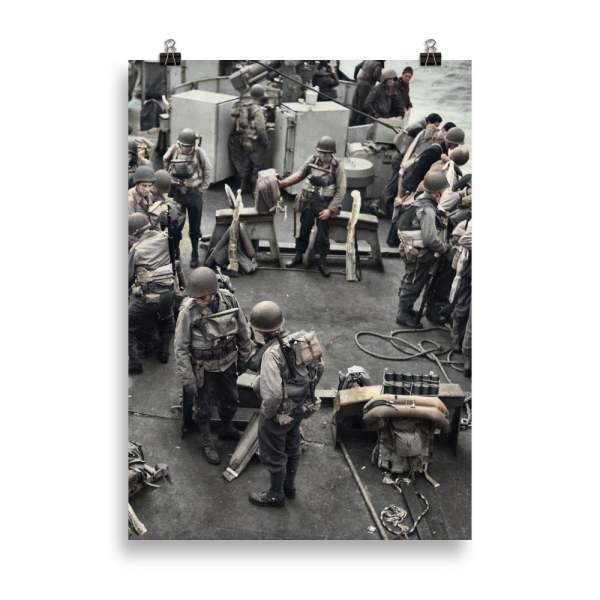 The American 82nd and 101st Airborne Divisions were to land southeast and west of Ste-Mère-Église, on both sides of the flooded area of the Merderet River, to occupy road crossings and bridges over the Douve. This part of Operation Neptune was to support the landing from the sea at Utah Beach and prevent the enemy from sending reinforcements to the Cotentin Peninsula. The British 6th Airborne Division was to land east of Caen and capture road crossings and bridges over the River Orne near Bénouville and Ranville.

It was hoped that on D-Day 1500 tanks would be landed, 5000 tracked fighting vehicles, 3000 guns and 10,500 vehicles ranging from jeeps to bulldozers. That was broadly the task of the land forces.

The American forces were on the right or western flank for supply reasons. Once Cherbourg and the ports of Brittany were captured, they would be supplied directly from the United States. The British would eventually be dependent on the Channel ports and Antwerp. Meanwhile, they would all have to rely on the two Mulberries and the five Gooseberries.

The Air Force and Navy for Operation Neptune 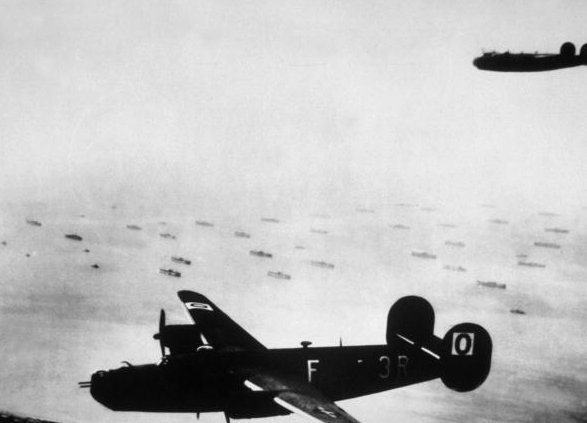 B-24 Liberator flies over the Armada, which is on its way to the French coast.

put the Navy’s task in simple terms. In the first instance, the success of Overlord would depend largely on the navy. His operational orders of April 10 read:

” The object of the Commander-in-Chief of the Maritime Forces is to see that the attacking forces arrive at the beaches in time, that their landings receive adequate support, and that thereafter the build-up of our forces on the mainland proceeds as rapidly and as well as possible”.

In round figures, about 5,000 ships and 4,000 smaller vessels to link them to the mainland would serve the attack. Their firepower, which ranged from the heavy armament of the battleships and cruisers to the guns of the destroyers, the rocket ships and the fire of tanks and guns that would fire as they sailed towards the coast, was colossal.