Gold Beach was the widest of the five amphibious landing zones on D-Day. It was situated between La Rivière and Longues-sur-Mer.

The centre of gravity of the British attack from the sea was on the right flank, on Gold Beach, a narrow strip of beach with treacherous patches of soft clay. Behind it, further west, were the bunkers and fortified villages of Arromanches and Le Hamel, and to the east La Rivière.

It was 07.25 hours when the flak tanks and armoured fighting vehicles of the Westminster Dragoons, and the 81st and 82nd Assault Squadrons, approached Le Hamel beach and La Rivière. It became immediately apparent that the heavy bombardment and artillery fire had not succeeded in silencing the enemy guns, especially on the right flank. Only one of the flak tanks, supporting the right flank of the 231st Brigade, managed to clear a way across the beach, while other tanks following behind got stuck and lost their tracks in mine blasts and heavy machine gun fire. Landing craft, swept along by the strong winds and heavy seas, became entangled in the obstacles in front of the beach, causing tremendous chaos in the shallows.

The squadron commander of the tanks on the right flank was immediately killed in the turret of his tank, but many armoured vehicles, temporarily unable to advance, shelled the enemy with their main armament and were thus a valuable support. But further east, beyond the area under fire from Le Hamel’s bunkers, the three assault groups supporting the brigade’s left flank surged forward. While the flail tanks pounded the beach, trying to reach the coast road seemingly unaffected by mine explosions and mud, the ‘Bobbins‘ laid paved surfaces over patches of soft clay and AVREs (Assault Vehicle, Royal Engineers) with their large, unwieldy burdens crawled over the beach filling bomb craters, bridging tank trenches (Fascine-Tanks), clearing the way for the infantry, armoured forces and the great mass of vehicles approaching Gold Beach with a pressure that could not be underestimated.

The DD tanks, which had not been able to sail to Gold Beach under their own power in the rough weather, had not been launched but were to be landed later, when they would considerably strengthen the Allied firepower. Meanwhile, the flail tanks and the supporting AVREs fulfilled the role of spearheads. 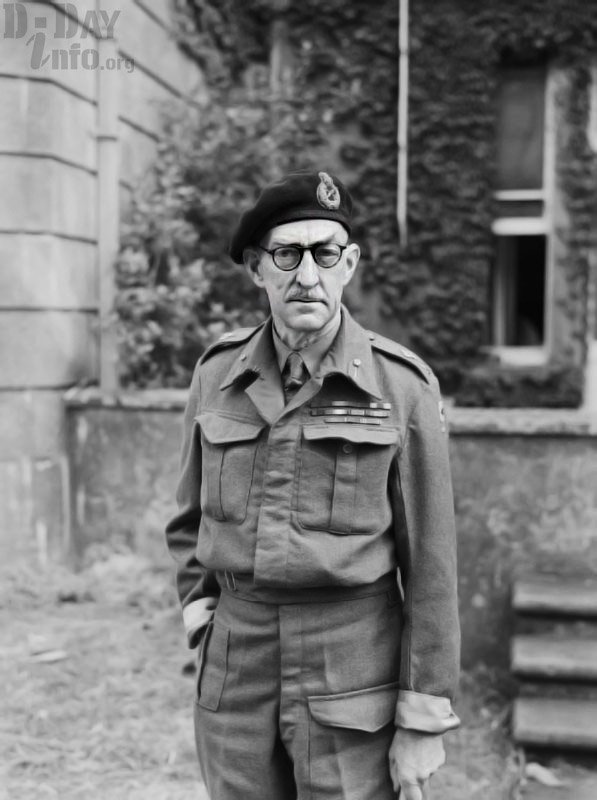 Within an hour Hobart’s armoured forces had cleared the chaos on the beachfront and cleared four of the six exits from Le Hamel beach. They then led the forward battalions of the 231st Brigade on to their targets. The Petards struck the fortified houses and enemy strong points all along the front, which otherwise could have held up infantry platoons and companies for hours and would have taken a heavy toll.

On the 69th Brigade’s front at La Rivière, flak tanks and AVREs of the storm troopers made their way across the beach with the infantry, despite intense mortar fire, armoured defences and machine gun fire from well-placed bunkers and houses, which together formed a tight defensive system. From the beach to the edge of the marshland behind the coastal road, three of the six openings in the enemy obstacles were cleared. While Petards with their formidable mortars supported the infantry in its attack on the enemy bunkers, the AVREs filled the craters and tank ditches with facsines, kept the armoured vehicles from crashing too hard behind walls, bridged deep gullies and cleared the way for the numerous vehicles and men who came to shore with the rising tide. Within an hour, the armoured forces and infantry had moved more than a kilometre inland. The outer hard crust of the enemy’s defences had been broken.

A Mine flail tank is being tested for D-day.

An ‘Omaha in miniature’ could have been created on Le Hamel’s right flank had it not been for Hobart’s armoured forces. The 1st Battalion of the Hampshire Regiment had had a bad passage. The seasickness pills had not helped much. The men left the landing boats 30 metres from Gold Beach in waves that washed around their legs and tried to pull them over as they waded towards the beach. If they were happy about anything, it was that they were no longer in the boats on the choppy sea and were finally starting to get rid of that awful feeling of nausea. They had not landed with the support of mechanised guns and field artillery firing at the coast and for the last half mile they had been under enemy mortar and machine gun fire. But this had been more unpleasant than life-threatening. Smoke and flames blocked the view of Gold Beach, but it seemed that the terrible bombardment, followed by the shelling by the fleet, had not silenced the enemy positions.

On the beach, in the first few moments when they were relatively safe and unaffected by Le Hamel’s guns, they saw only the confusion of damaged and broken armoured vehicles and soon discovered that for two-thirds of their number no safe passages had been made through the rubbish on the beach. They were halted by heavy enemy fire as they tried to cross the beach and the gunfire from the ships could not help them. As their battalion commander was wounded twice and could not take part in the battle, and his deputy was killed soon after, a direct approach by the enemy was out of the question.

The companies of the battalion on the left flank reached Les Roquettes, which was in fact an objective of the 1st Dorsets on their left flank, and then turned to the right, captured Asnelles-sur-Mer and made preparations to capture the sanatorium near Le Hamel. But it was noon before the sanatorium, after withstanding all infantry assaults, finally collapsed under the force of the Petard tanks.

Meanwhile, the 1st Dorsets, out of range of the guns at Le Hamel, had stormed over the beach under cover of the tanks, then swung right to take the high ground at Arromanches.

On the beach at La Rivière, the 5th Battalion of the East Yorkshire Regiment and the 6th Battalion of the Green Howards could not have doubted the value of the armoured forces. From the first moment infantry and tanks, strongly supported by close fire from guns positioned on landing craft, stormed the beach positions in excellent coordination, fought their way through the streets, knocked out the Germans’ 88 mm guns and bunkers and moved further inland. The circumstances had been unfavourable to the men, but not so unfavourable that they still had enough fighting power left after the landing, and if they could overcome the first obstacles on Gold Beach, they should be able to advance further. For the enemy had only had a chance to stop them in the shallow water off the coast or on the beach, as Rommel had predicted. 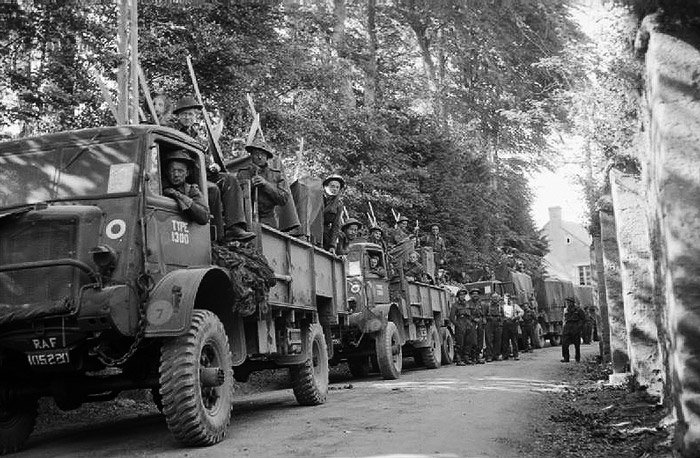 An RAF convoy in Ver sur in the King sector.

By 11 am, seven roads had been cleared on Gold Beach. The DD tanks moved rapidly inland and were followed by the 56th and 151st Brigades, who made sure that the enemy had no opportunity to recover. Long before the Le Hamel sanatorium was captured, the landing head was almost five kilometres deep, the 56th Brigade was advancing along the La Rivière to Bayeux road, the 151st was rapidly approaching the high ground on its left flank, while also on its left flank the 69th Brigade was moving towards Creully. Even the right flank, held up at Le Hamel, had managed to cut the road from Arromanches to Bayeux, while the 47th Royal Marine Command was preparing a storming of Port-en-Bessin.

The Commando had been far ahead of them all. It had had to land west of Le Hamel and, coming under fire from guns on the rocks, had lost four of its fourteen storm boats. Finally, after being forced to turn further east, it had landed east of Le Hamel, hoping that the way inland would be cleared. But this was not the case. It had to fight its way through the coastal villages. Each of the men had to carry 30 kilos of equipment and yet, in the course of the morning, they had covered more than 15 kilometres. By the time the 231st Brigade began to feel that they had not been completely abandoned by everyone, they had taken the high ground south of Port-en-Bessin. There were not many who had done more than they.