A comprehensive overview of the Allies on D-Day. We go over the participating nations and their role during the Battle of Normandy. 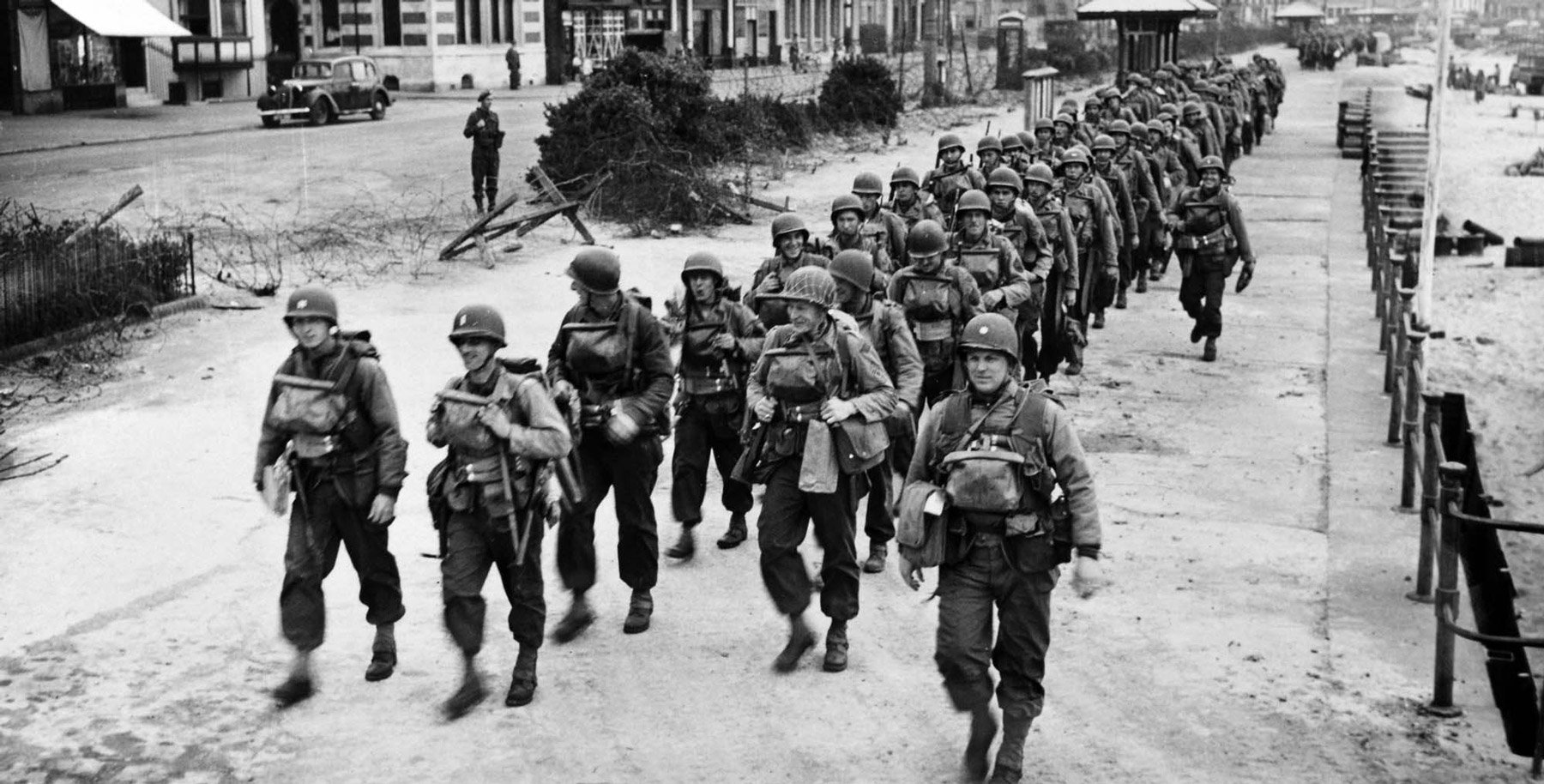 US Rangers in Weymouth, Dorset. On their way to their ship that will take them to Normandy.
Share this page
Related tags
AlliesAmericansAustraliaBelgiumCanadiansFranceGreat BritainLuxembourgNetherlandsNorwayPolandUnited States
Print page
Save as bookmark

Most people know that the Americans, British and Canadians were part of the Allied forces on D-day. But smaller countries also played an important role in their contribution to this historic day. Both in the preparations and in the days after the landings. In this article we make an overview of the Allies on D-day and discuss which role they played.

The British were one of the Germans’ most stubborn opponents throughout the Second World War. They had fought each other in France, Greece, Norway, North Africa and in the skies of Europe. In addition, the British fleet was blocking Germany and cutting them off from economic activity by sea.

Now they were about to be one of the biggest contributors to the liberation of German-occupied Western Europe.

Although the United States had far more soldiers and resources at its disposal, it was more a matter of national pride for the British to be one of the largest contributors among the Allies on D-Day. Two of the five beaches were allocated to the British troops, Sword and Gold beach. The ground, air and naval commanders for this battle were all British. 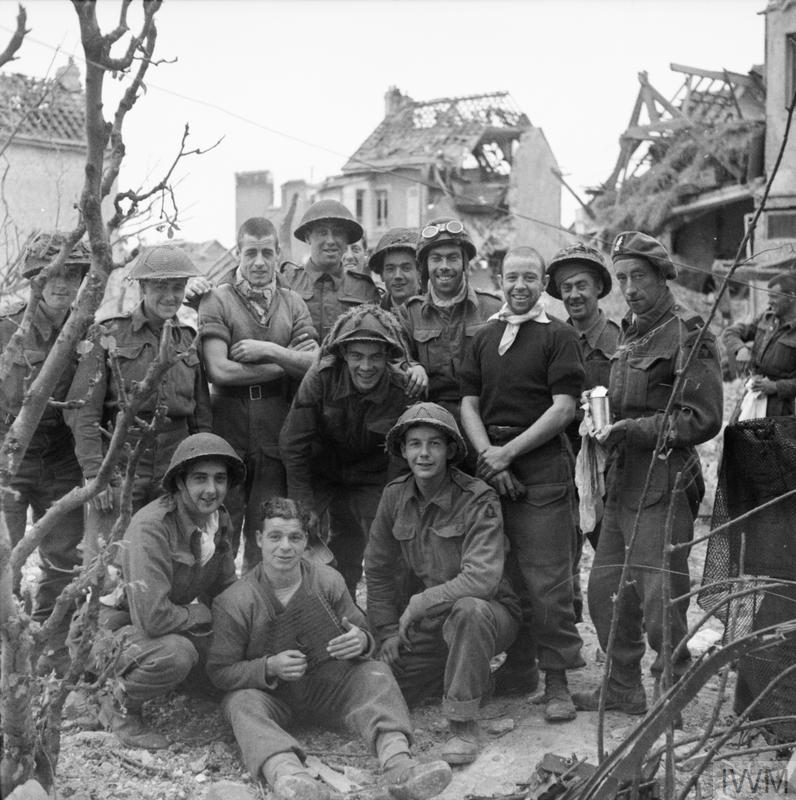 A group of British soldiers of the 3rd Division pose for a photo in Caen on July 10, 1944.

The United States was the economic gun behind the Western Allies on D-Day as well as the largest contributor in terms of troop numbers.

The commander in chief for the Normandy landings was General Eisenhower.

While the British were bogged down by German forces in and around Caen, the Americans were able to force a breakthrough (Operation Cobra) in western Normandy, forcing the Germans to retreat en masse.

In the aftermath of D-day and Operation Overlord, it was mainly the Americans who dictated the battlefield in Western Europe. 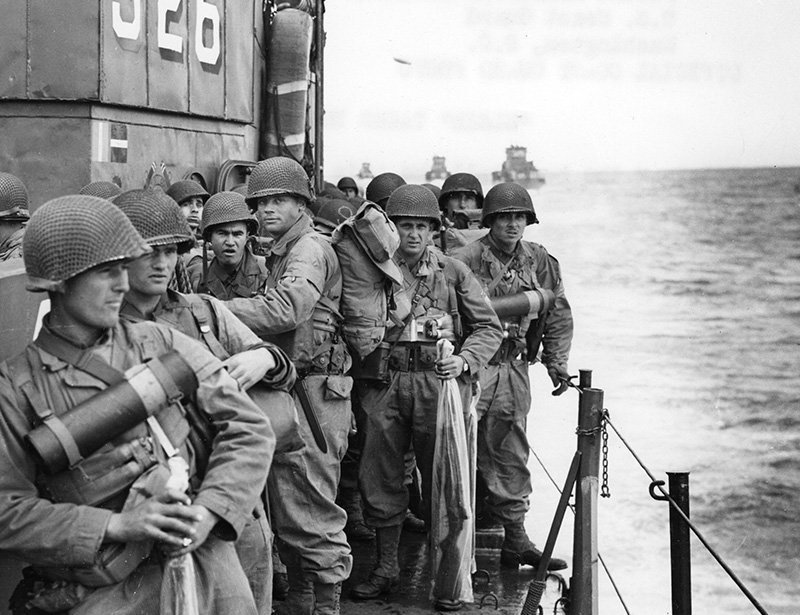 American soldiers wait for their landing craft as they are transported to the Normandy coast on D-day.

In conjunction with the British command, the Canadians were the third largest Allied force on D-Day and further operations in Western Europe.

The Canadians also had considerable experience of amphibious landings in France when they suffered enormous losses in the disastrous attack on Dieppe. They made good use of that experience when landing on Juno beach, the landing zone assigned to them on D-Day.

They also played a crucial role in the actions that led to the end of the campaign in Normandy when they surrounded the Germans in the Falaise pocket. 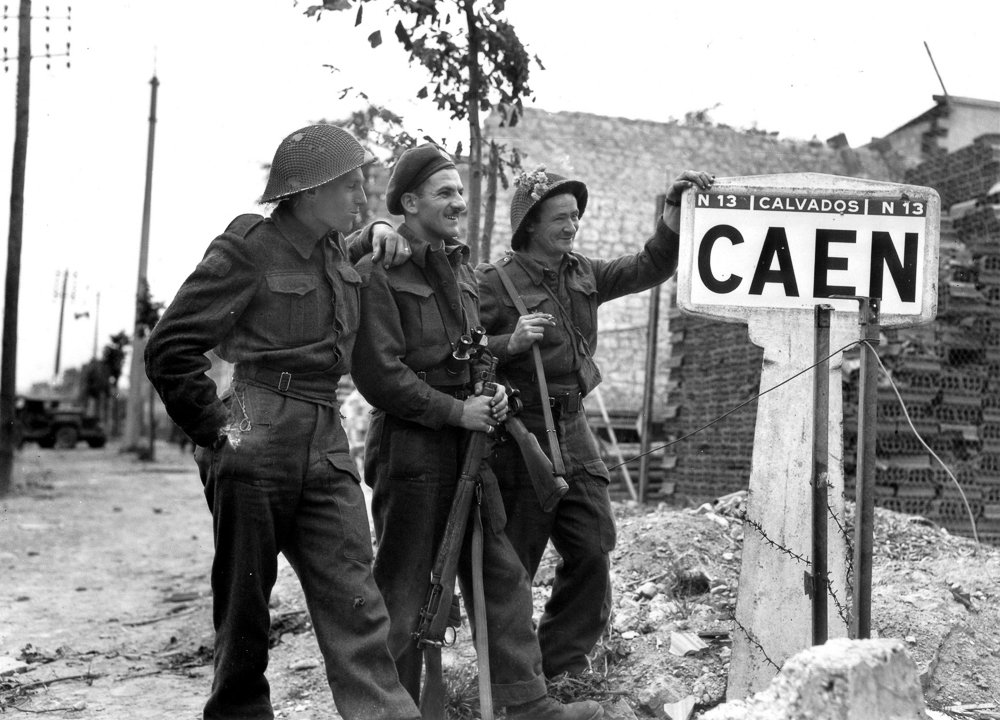 Three Canadian soldiers in the outskirts of Caen, July 9, 1944.

Thousands of French resistance fighters risked their lives for the Allies’ D-day base and preparations. They sabotaged railways, trains, roads, telephone lines to weaken the mobility and communication of the Germans. When the landings took place, they posed an irritating threat to the Germans behind their lines.

Since the fall of France in 1940, the free French soldiers gathered in Britain. By d-Day they numbered about 400,000. Some landed as paratroopers in collaboration with the British. Most arrived on the beaches in August to join the rest of the Allies in Normandy. 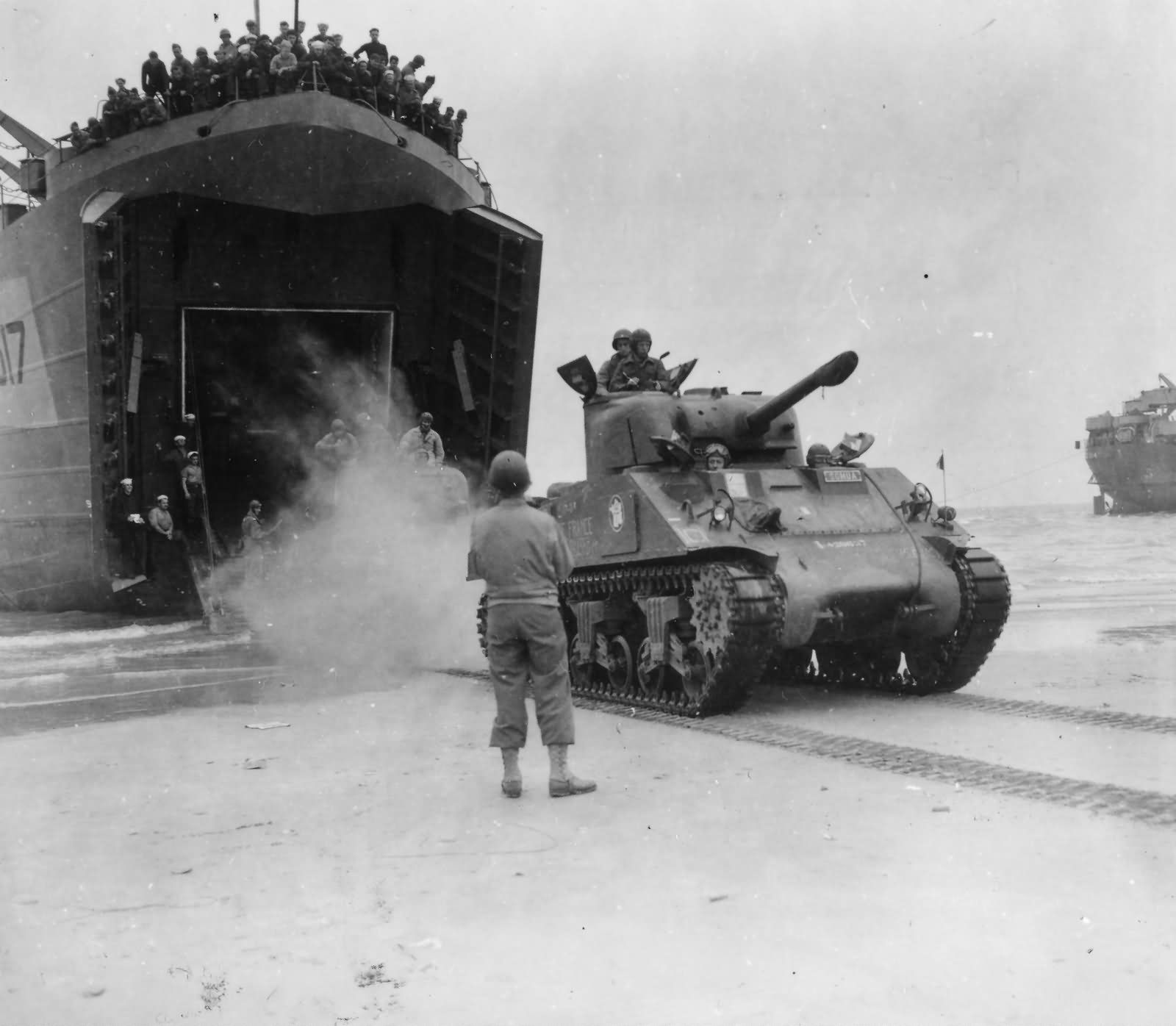 The second armoured division of the 'Free French' comes ashore on Utah beach with a M4A2 Sherman tank.

After the fall of Poland in 1939, tens of thousands of Polish soldiers fled south to get to free Europe as quickly as possible. They eventually formed a full unit in the British Air Force and were further used usefully in support of the Allied armies during the Normandy campaign, including helping the Canadians encircle the Falaise pocket. Among the Allies on D-Day, Polish sailors and pilots were mainly deployed. 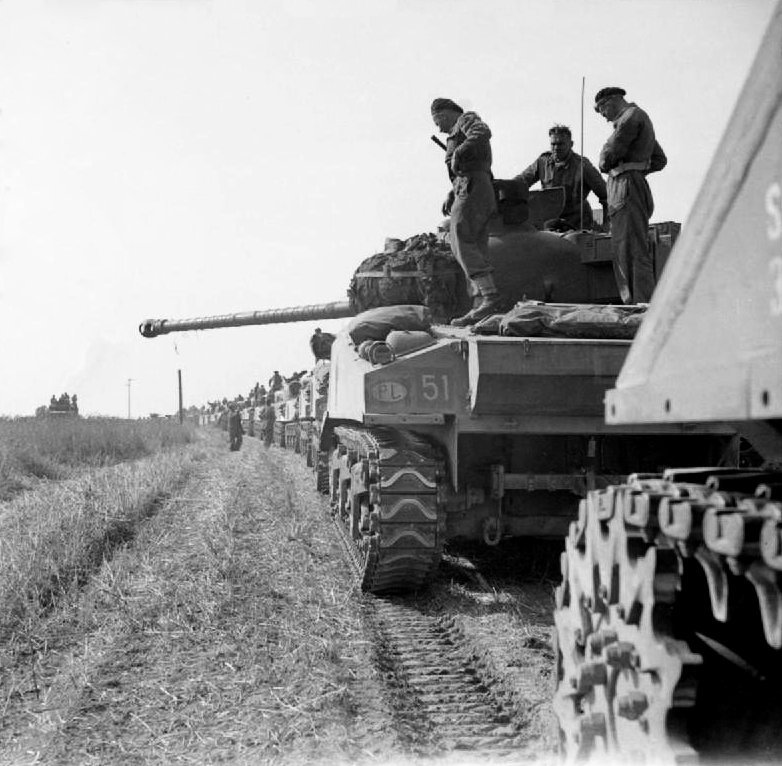 Sherman tanks of the 1st Polish Armoured Division at the start of Operation 'Totalise' during the formation of the Falaise Pocket.

The small but not undeserving Dutch contribution to D-Day itself consists of a number of ships and aircraft. Later on the Prinses Irene Brigade comes into action.

Thirteen Dutch motor torpedo boats protect Allied landing ships during the invasion. In addition, some twenty merchant ships, including ten tugboats, support the invasion. The tugs not only towed war material but also participated in rescue operations. Two gunboats sail in convoy to France and join the fight. The Dutch gunboat Hr. Ms. Flores is so active that by the evening she has used up all her ammunition. The Flores wipes out the crews of three bunkers near Arromanches. The gunboat Soemba also knows what to do. Because of their excellent performance on D-Day the British nicknamed the ships ‘The Terrible Twins’. The outdated cruiser Sumatra is sunk to protect an artificial harbour at Arromanches. 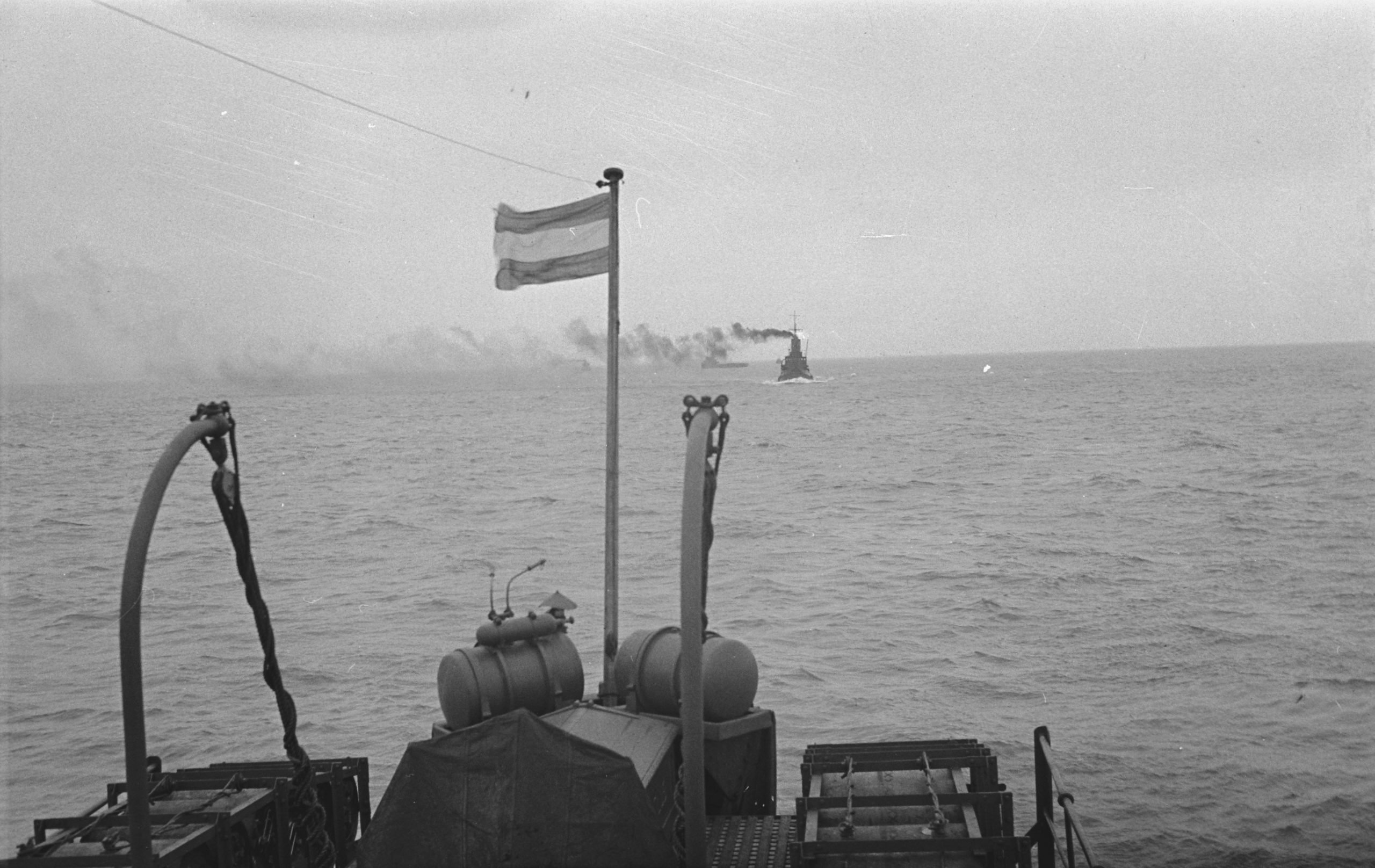 Report of the Hr. Ms. Flores on D-day.

Also Dutch pilots are deployed on D-day. On the evening of the 5th of June, twelve crews of the Dutch 320th squadron are briefed. Under the command of the RAF they carry out airborne operations in France on June 6 with B-25 Mitchell bombers from England. The squadron suffers comparatively heavy losses: 25 men are killed and eight bombers do not return.

Two months after the invasion, in August 1944, the Princess Irene Brigade lands in Arromanches, France. The Brigade was founded on 11 January 1941 in England and consists of Dutch soldiers and Engelandvaarders. In total, more than 1300 Dutch ground soldiers were deployed to liberate Europe. The Brigade fought against the Germans at Pont-Audemer and Saint-Côme and later also in Belgium. They also played a role in the liberation of the Netherlands.

Among the Allies who went ashore on D-Day, there were no Belgians. After all, on June 6 the First Group was not yet fully operational. Moreover, the Belgian and British army command wanted to prevent Piron’s unit (Piron Brigade), the only large Belgian land force at the time, from being destroyed during the first hours and days of the invasion. Many men were disillusioned in any case.

Marshal Bernard Montgomery congratulates Colonel Jules Piron in front of the assembled brigade on the Grand Place in Brussels, 10 March 1945.

Those who were there on that historic sixth of June 1944 were the pilots of the Belgian Section of the RAF. Squadrons 349, 350 and 609 flew missions in support of the invasion forces. In the weeks before, they had also done their bit to prepare for the landing, bombing targets in Northern France. The Belgian narrow sections belonged to the British Second Tactical Air Force (2 TAF), which together with the American Ninth Air Force had to ensure air superiority.

The ‘Belgian’ corvettes Godetia and Buttercup were also present on June 6, 1944. They were deployed in the framework of Operation Neptune, the maritime part of Overlord. Together with other corvettes and destroyers they were responsible for the protection of the transport ships and battleships. The crews of the heavy warships were fully occupied with their main task: providing fire support to the invasion forces and shelling the Atlantic Wall.

Since Belgium had no navy in 1940, it is surprising that Belgian sailors were able to make a modest but real contribution to the gigantic military operation in Normandy. That contribution was not limited to the deployment of the two corvettes.

After having served a year as second-in-command on the Buttercup, lieutenant commander Georges Timmermans got the command over the British 202nd Flotilla. On D-day his LCI’s brought the 48th Regiment Royal Marines to Juno Beach. The vessels, among them Timmermans’ own LCI 525, were heavily attacked, but still managed to land most of the naval commandos. For hours they shuttled back and forth between the big transport ships and the beach, before all troops were ashore – the LCI 525 did ‘the navette’ five times. The day after the landing, Timmermans went ashore in Courseulles and with that he was probably the first Belgian who entered liberated France. One week later, the Belgian officer received a special assignment. On June 14, General De Gaulle transferred from the destroyer La Combattante to Timmermans’ landing craft. The Belgian commander and his British crew brought the leader of the Free French back to his homeland after an absence of four years, thus witnessing an important historical event.

Besides Timmermans, several other Belgians experienced the invasion on board an Allied ship. One of them was the Jewish Belgian Michel Brodsky, who served on an escort ship to Gold Beach. In the same sector, marine pilot E. Herreman was active, who had previously worked in Sierra Leone by order of the British Admiralty. And ensign A. Jansen commanded one of the motor boats protecting the landing craft in the American sector of Utah Beach on June 6.

On 7 August, Brigade Piron and his men landed at Arromanches, on the Normandy coast, where they were actively involved in the Battle of Normandy, for example in Operation Paddle, designed to hold back the advance of the German army towards the Seine. The Brigade continued its advance northwards, and on 3 September 1944 Piron and his men crossed the French-Belgian border. One day later they liberated Brussels. Afterwards, the brigade was involved in the liberation of the Netherlands.

Like the Poles, the Czechs formed their own units within the RAF. That way they had their contribution in the airspace during D-Day. Even though no Czech ground troops were active in the first weeks of the campaign, Czech refugees often fought under the flag of another country.

Like the Belgians, the Danes contributed sailors to the fleet transporting troops across the Channel.

Like the Belgians, the Danes also contributed sailors to the fleet transporting troops across the Channel from Great Britain to Normandy.

Like several countries occupied by Germany, Norwegian soldiers fled to Great Britain. Some of them were part of the British units and had their own commando unit for special operations.

During World War I, Australia decided to do their bit by offering their best soldiers as reinforcements to the British forces. They did the same again in the Second World War.

On D-Day, approximately 2,000 Australians were deployed to serve in the skies and carry out bombing raids on German troops. 500 sailors served in the Allied fleet.

The Australian Sergeant Fred Wood with a gendarme officer somewhere in a village in Normandy. He was responsible for the maintenance of the Spitfires of No. 453 Squadron.

Although no New Zealand formations took part in the D-Day landings, they were more individually distributed throughout the Allied forces. They often flew fighter or bomber planes, fought in units of other countries and could often add value as radar specialists. An official observer from New Zealand landed with the British on D-Day.

Even the small Duchy of Luxembourg contributed to the campaign. Before the war, the number of soldiers in their army was 50. When they held a military parade, they used firemen, dressed as soldiers, to raise the number, so to speak.

But still, they contributed a handful of soldiers to the Allies who helped liberate Europe.