The purpose of the attack on Dieppe was to capture a port, hold it, gather information and see how the Germans would react.

The state of the beach after the attack on Dieppe.
Share this page
Related tags
attackAttemptDieppeharborlessonportraid
Print page
Save as bookmark

The attack on Dieppe ranks among the greatest wartime tragedies in Europe. On August 19, 1942, the British Joint Operations Command sent 252 ships across the English Channel to the coast of eastern Normandy to attack Dieppe at daybreak. These ships carried about 6100 men and 30 tanks. Most of the soldiers were Canadians, divided into two infantry brigades – almost 5000 men – supported by about 1000 British commandos plus small special units from the Americans and the Free French.

What exactly they were to do was unclear to many men. As a reconnaissance force, they had to capture and occupy an important port city. At the same time, the Allies hoped that this action would relieve the pressure on the fighting Russians, because the Germans would now be forced to move their troops from the east to the west. There was no plan ready for what to do after the first waves of attack. In fact, there were no reinforcements available at all for any follow-up. Before the troops were even ashore, things had already gone wrong. Some landing craft got caught up in a small German convoy. The noise of the fighting alerted the nearby coastal defence posts. The element of surprise was totally lost. When the main body of the assault force landed at Dieppe, the men were met with deadly machine gun fire. The few tanks they had landed too late and many soldiers got stuck in the shingle sand or did not make it beyond the sea wall. Only a few Allied soldiers managed to get off the beach. 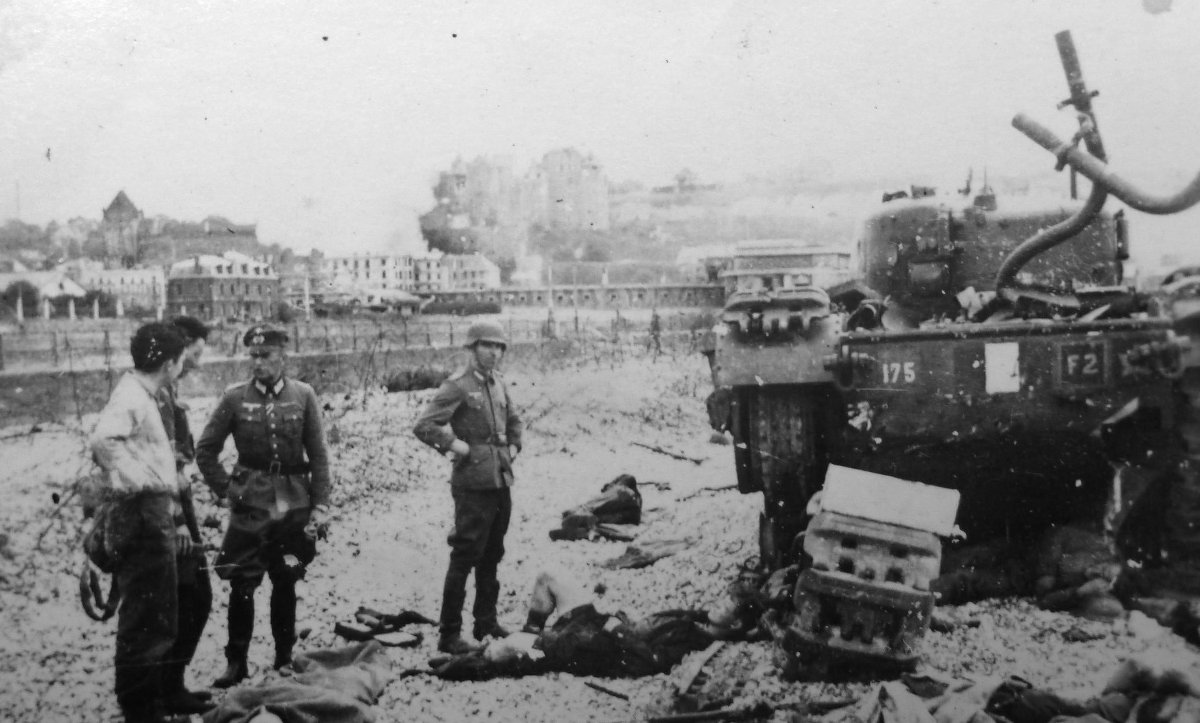 German troops inspect a disabled Allied tank after the attack on Dieppe.

After nine hours of fierce fighting, a few lucky soldiers were relieved. The losses on the Allied side – killed; wounded, missing or prisoners of war – amounted to about 4100, more than two thirds of the entire assault force. Among them were 907 Canadians killed and 1874 taken prisoner. One destroyer and three landing craft were sunk. The number of casualties on the side of the Royal Navy was 550, including 75 who lost their lives. The RCAF lost 99 aircraft, the largest number lost in one day. On the German side 314 men died, 294 were wounded, 37 were taken prisoner and 48 aircraft were lost. What did the Allies gain in the end? The Germans did not move their troops from the east to the west but they reinforced their coastal defences in France (Atlantic Wall). In general, it is believed that embarrassing mistakes made during the attack on Dieppe contributed in the end to the Allied successes in Normandy, where they were taught how to conduct an invasion.