The weather forecast for D-Day was crucial to ensuring that the crossing into Normandy and the landings went as smoothly as possible. 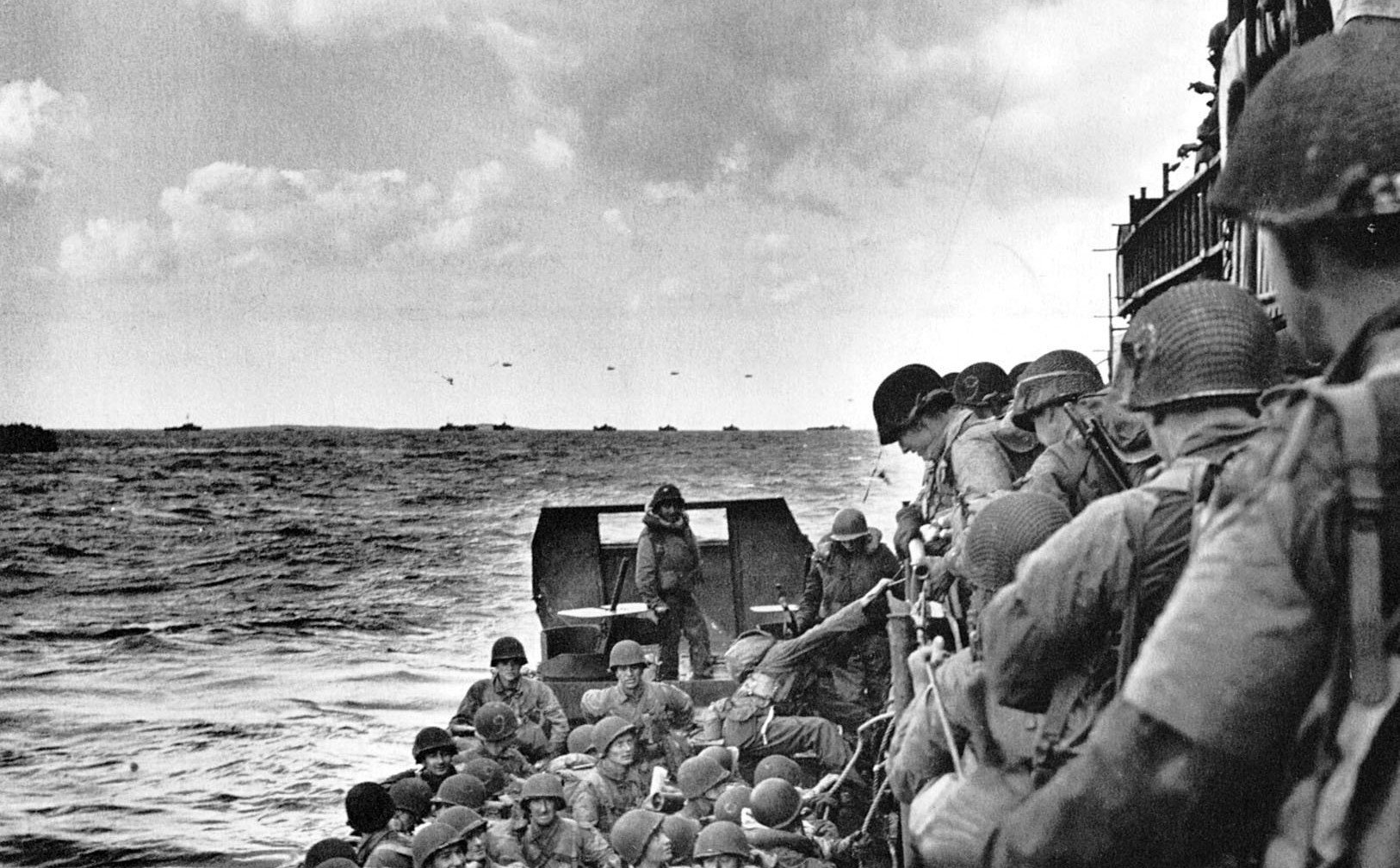 American soldiers climb aboard their landing craft on their way to Omaha beach, 6 June 1944.
Share this page
Related tags
DateEisenhowerPredictionStaggWeather
Print page
Save as bookmark

In the twentieth century, the development of the air force made the meteorological reports of great importance for the command. At the outbreak of the Second World War, the international exchange of weather observations ceased. The warring parties provided themselves as much as possible with information by their own military units, such as meteorological air reconnaissance and naval weather ships. Under these circumstances, General Eisenhower had to make his far-reaching decision for the Allied invasion of the Normandy coast (codenamed ‘Operation Overlord‘), in which the weather forecast was also of crucial importance.

Already in the summer of 1943, the Allies were busy with the logistical dilemmas and unimaginably complicated details of a military invasion of Western Europe. The meteorological preparations were initially made by the (civilian) British Meteorological Office from the London area. Later, a meteorological group was formed from both British and American meteorologists. Finally, a delegation was formed from the army, the air force and the navy. Thus, three central weather services were created at different locations in England, communicating via specially secured telephone connections

Members of the 518th Squadron. They flew almost every day from West Scotland to the Atlantic Ocean regardless of the weather. In this way they collected data and information for the British Meteorological Office.

A wide range of climatic factors had to be taken into account in the preparations. Firstly, there was a wide range of completely new equipment, such as amphibious tanks and special landing craft that could drop the first wave of assault troops almost on the beach. At the same time, specialised units such as airborne troops, squadrons for precision bombing and rocket fighters would be deployed to engage ground targets. The transfer of the gigantic ground force would demand the utmost from the Navy. It was therefore impossible for the meteorologists to establish unambiguous conditions which the weather during the invasion and the following days would have to satisfy for the various units.

Outlook of the D-day weather forecast

On Sunday May 28, the first D-day weather forecast was presented. Two telephone conferences per day were held over specially secured telephone lines, at 4 o’clock in the morning and at half past nine in the evening. Initially, people were very optimistic. For several weeks in a row, the foothills of the Azores high pressure area had provided fine and stable weather. It was unanimously believed that the favourable weather would last for several consecutive days. However, on Tuesday June 1, the real work started for the meteorologists. Not only because D-day was approaching, but especially because of the developments on the weather map.

At that time, no standard upper air observations were available, let alone satellite photographs and weather models. They were dependent on the ground observations on the British Isles and especially on those of ships on the Atlantic Ocean. Many reconnaissance flights were sent out to make observations west of the British Isles. These were very valuable additions to the measurement network. On this first day of June, it appeared that a belt of low-pressure areas was gradually developing from the east coast of America to the sea area between Iceland and Scotland.

The analysis made by meteorologists by hand in the evening hours of June 3, 1944 caused great concern to the Supreme Command, which was commanded by General Eisenhower. The ‘wavy’ front between 53 and 60 degrees North contained several depressions. The timing of the cold front west of depression number 2 that would drop over the British Isles and the English Channel was made with suspicion. If the front was to “drag” over the Channel during the period June 4-7, that meant poor conditions, with probably also a lot of wind at the front of the front.

On Sunday morning the various meteorologists were so contradictory that Eisenhower was already thinking of postponing the invasion until June 7.

Late on Sunday evening, June 4, the analysis showed that two depressions had merged into one layer just northwest of Scotland. The associated cold front had made considerable progress and was already entering England that evening. Sunday evening it became clear that the cold front would pass the Channel area and the invasion beaches on Monday afternoon June 5, so that during the landing on Tuesday morning June 6 the conditions would be better than initially estimated. Once again, arguments broke out between the meteorologists, as they expressed their concerns about depression number 3, which could again cause poor conditions later on Wednesday June 7.

In the decision-making process, the tracking of the high-pressure ridge west of Ireland was crucial, and all eyes remained on it. Additional reconnaissance flights confirmed the presence of a fairly wide area of broken clouds and good visibility that meanwhile reached Ireland.

The next morning – June 5, 1944 at 04.30 hours – the signal was given. James Stagg, who was in charge of the meteorological services, was able to convince Eisenhower to allow the landings to take place on June 6 as by then the cold front had passed the south of England. The invasion force was able to cross the Channel under the cloud pack, while in the west the first clearings became visible. The fate of D-Day was determined by this decision of James Stagg and the confirmation of Eisenhower.

The weather during D-day

During the first landings in the early hours of June 6, the weather over the landing zones was even better than expected, but there were also setbacks. Further inland, the layers of cloud still present made many bombing raids on strategic targets difficult. Above the Channel and along the beaches the wind had decreased, but was roughly 1 Beaufort stronger than expected. On the weather map the meanwhile merged low pressure areas (number 1/2) had filled up strongly, but were deflected to the south-east completely unexpectedly. The centre came to lie over the middle of the North Sea. Many beaches were not as wide as expected and on some beaches the remaining waves caused a lot of misery.

Nevertheless, D-DAY was a success. This was due to the enormous surprise effect. The German army command was taken completely by surprise because a crossing, anywhere along the French west coast, in such bad weather (as it was on June 5) was thought impossible.

If Eisenhower had postponed D-day, the next period would have been 17-19 June 1944. Curious is that exactly in this period a wind force 7 came up totally unexpectedly in the Channel and a lot of artificial harbours in the American sector were lost. An invasion in that period would have ended in disaster. 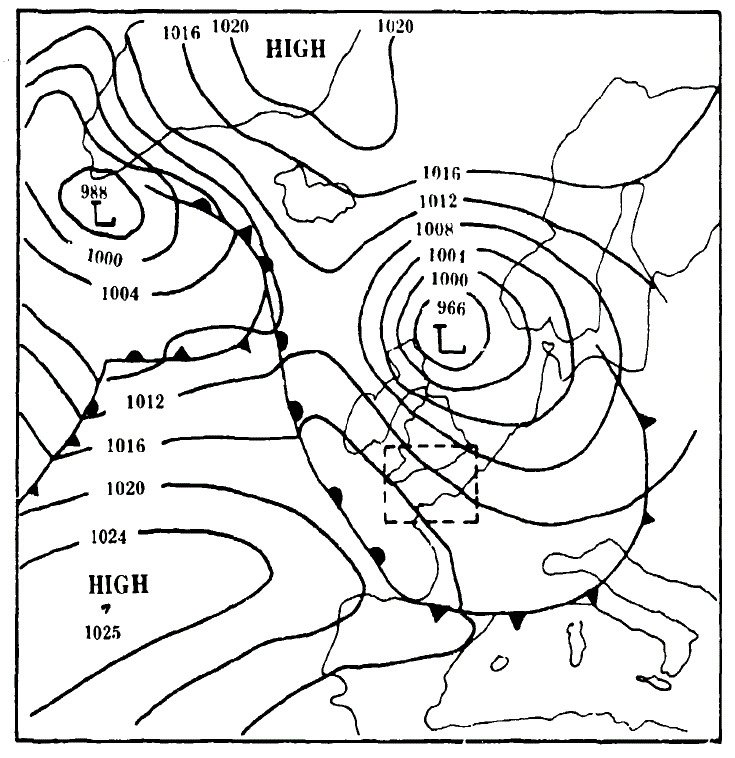 The German meteorologists in France could not get a good overview of the weather on the Atlantic Ocean, because their Navy was already largely destroyed. Furthermore the German air forces hardly came above the airspace of England anymore, because of the enormous losses they had suffered and the intensified fighting in the east of Europe. The result was that the German meteorologists never saw the clearing on the Tuesday morning in question coming!

Because of the good moon phase and the tide, the Germans had marked June 5, 6 and 7 as a period with a high risk for an Allied invasion. The German meteorologists assumed, based on their own analysis, that the days after June 5 would be unfavourable because of the expected weather. They had reduced the surveillance on the coast and offshore (via submarines). Precisely in those first hours of June 6, no German submarines entered the Channel. This allowed the Allies to line up along a 100 km line up to 15 km off the French coast.

So when the German General Rommel saw the German weather forecast on June 5, which predicted continued bad weather, he no longer counted on an invasion. He left for Berlin the same day to celebrate his wife’s birthday and to talk to Hitler!