The Panzer issue, the dilemma over the correct positioning of the German Panzer units, played a crucial role in the outcome of D-day.

Erwin Rommel in particular played an important role in the Panzer issue. He believed that Normandy would be the Allies’ main objective and that the enemy should be destroyed on and in the sea if possible, or at least on the beaches. He therefore wanted the Panzer reserves close to the coast to launch a crushing counter-attack as quickly as possible.

He had had unpleasant experiences with Allied air superiority in the Western Desert of North Africa and knew only too well what would be the fate of tank columns trying to move in daylight under ‘open bomb sights’. If the tanks were not there, he doubted whether they would be able to reach the coast. In any case, it would be practically impossible in daylight to move the tanks along the destroyed roads. The German air force had been so weakened by the Allies that it was almost impossible to provide air cover when troops had to move from one point to another. 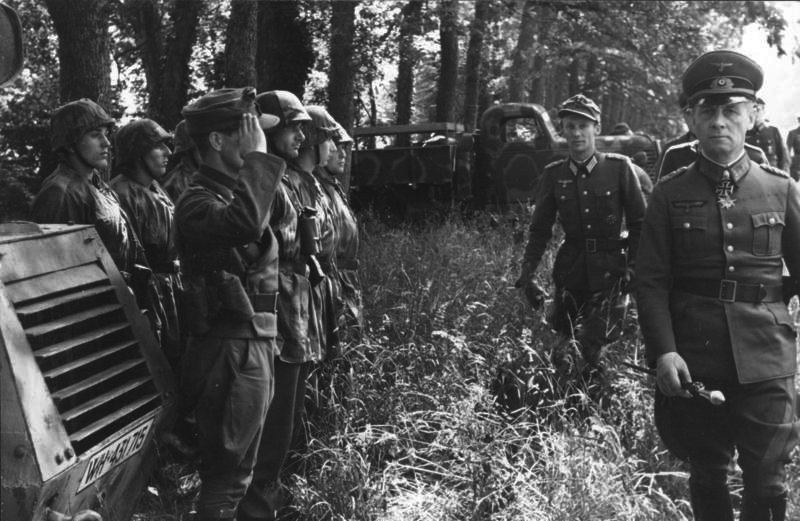 Divided opinions on the Panzer issue

No one doubted the seriousness of the Allied air threat; the extent of that threat was experienced at first hand day and night; yet neither von Rundstedt nor the panzer generals agreed with Rommel’s tactics. Indeed, they had quite different views on the Panzer issue. 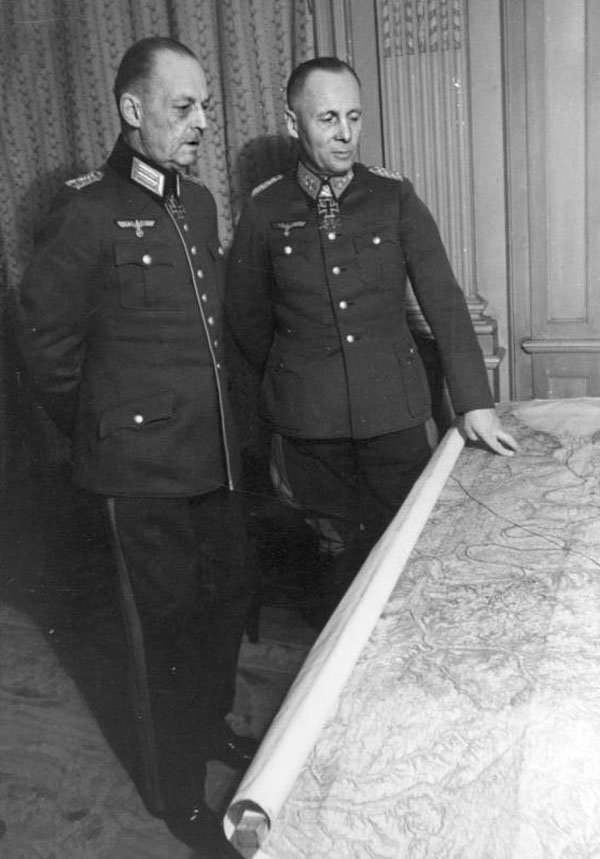 Erwin Rommel with Gerd Von Rundstedt at the Hotel George V in Paris during a meeting. 19 December 1943.

Firstly, von Rundstedt did not intend to launch a major counter-attack until the Allies succeeded in penetrating the outer crust of the German defences; secondly, he did not share Rommel’s view of Normandy either; thirdly, he did not want to bring the Panzer reserves to just below the coast before the invasion. It may be true that the Allied air force could prevent the Panzer divisions from moving, but it was equally true that the precious tanks could be destroyed by Allied air attack if Rommel had his way and the main Allied attack was launched at the Strait of Dover or elsewhere.

Panzer General Heinz Guderian, who was deeply concerned about the situation in the east as well as in the west, also seized his chance to intervene in the Panzer issue one morning in January 1944 when he was having breakfast alone with Hitler. He started talking about the urgent need to free up the defence lines and reserves that were active in the east to fill the gaps in the west, the Atlantic Wall. This elicited the following typical outburst from Hitler:

Believe me, I am the greatest fortress builder that ever existed! I built the Westwall; I built the Atlantic Wall...

He blew Guderian’s ears off with impressive data. In reality, Hitler had never seen the Atlantic Wall and it existed mainly in his imagination. Guderian then toured the west and was shocked to learn of Rommel’s plans to bring the Panzer reserves close to the coast. ‘Thus arranged,’ he wrote, ‘the tanks will not be able to be withdrawn or deployed elsewhere with sufficient speed.’ 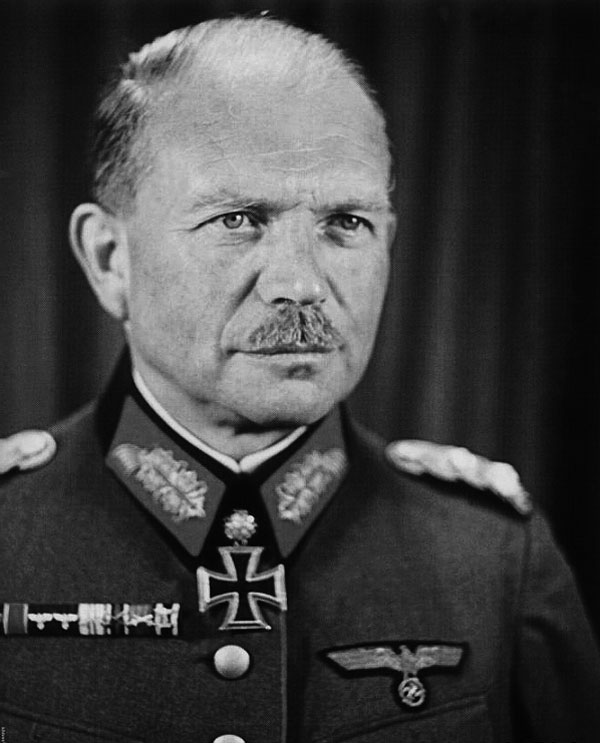 When he returned to headquarters, Guderian took the opportunity to bring the ‘mistake’ to Hitler’s attention. Hitler, however, refused to overturn the orders of ‘the man on the ground’ and advised Guderian to go to France and discuss the matter again with Rommel.

Guderian and Geyr von Schweppenburg then went to visit Rommel at his headquarters in La Roche-Guyon to discuss this Panzer issue. The Field Marshal explained his views at length, but was not prepared to discuss them. Not only did he believe that the main attack would come in Normandy, but he was also convinced that the enemy had to be destroyed before he got a foothold. If they let him, he would try to inflict such a heavy defeat on the enemy in the shallow waters in front of the beaches and on the beaches themselves that a second attack would be impossible. And if his assumptions, which were the same as Hitler’s, were correct, he would also have to prove himself right in the positioning of the Panzer forces. He did not deny that the risk was great, but it could not be avoided.

Erwin Rommel arrives at La Roche-Guyon (headquarters of Heeresgruppe B).

Apparently Rommel did not share von Rundstedt’s view that a battle of movements could be won. Hitler, meanwhile, clung to his hunches, strengthened by his conclusions from Allied troop movements, especially in the south-west of England, that Normandy would be the enemy’s main objective and that the Allies would logically attempt to capture Cherbourg. But the worrying possibility of a second attack, which could also be a large-scale assault on another point, raised doubts in his mind.

Guderian had made a third attempt to make clear to Hitler the danger in Rommel’s arrangement of Panzer forces, but in early May Geyr von Schweppenburg, fearing that Rommel would succeed in winning over von Rundstedt, appealed to Hitler on his own. He wanted to keep the bulk of his Panzer forces north and south of Paris, which caused Hitler to have doubts after all. 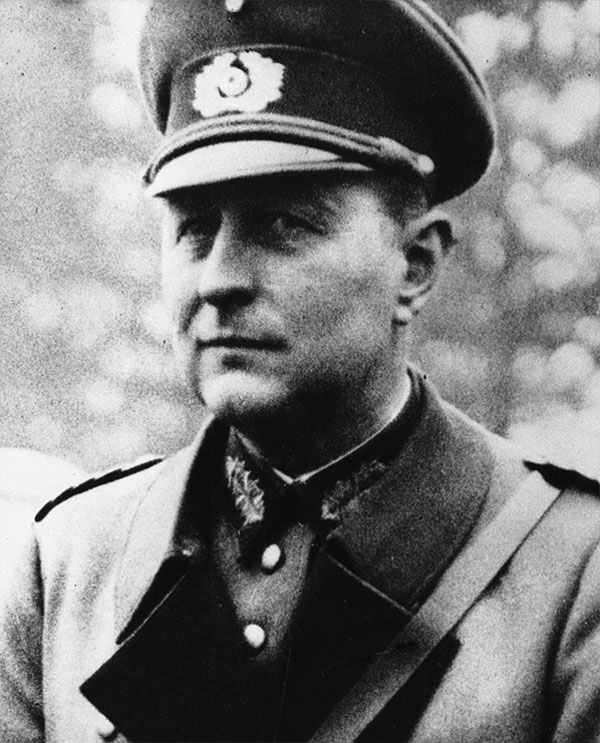 Hitler’s initial doubts seemed to determine the outcome of the Panzer issue. That outcome on D-day appeared to be the wrong one. On top of that, four Panzer divisions remained assigned as an attack reserve under command of the OKW, the Oberkommando der Wehrmacht. This weakened von Rundstedt’s command, for the old Field Marshal, who had already been thwarted in his efforts to build up an infantry reserve in Normandy by the withdrawal of forces from the area south of the Loire, was now deprived of the means to mount a successful counter-attack against the beaches unless he had first obtained permission from the OKW (Hitler himself). Thus, without knowing it, von Schweppenburg had created a situation that would prove fatal.

All these concerns were serious enough in themselves, but they were only one aspect of a general weakness arising from suspicion and decay at the German top.

Blumentritt noted that messages from the OKW (Oberkommando der Wehrmacht) at that time always began with ‘The Führer fears…’. He lived in constant fear, especially of the Allied invasion. While Rommel was a realist and calculated with men and material, concrete and mines, pieces of artillery and ammunition, Hitler was a dreamer who built castles in the air. The support he gave Rommel was half-hearted, never effective. He had the utmost confidence in Rommel, but apart from releasing a few armoured defence and anti-aircraft units to him to reinforce the western part of Normandy, he did virtually nothing for him.

The only chance for success

While Rommel, who longed for complete control over his troops, was in a position comparable to Montgomery’s, von Rundstedt’s position was in no way comparable to Eisenhower’s. Not only was von Rundstedt deprived of complete control over his forces, but he had to ask the Navy and Air Force for support when he needed it. Worse still was the fact that the Navy had control of the coastal batteries that were to play an important role in repelling the attack. 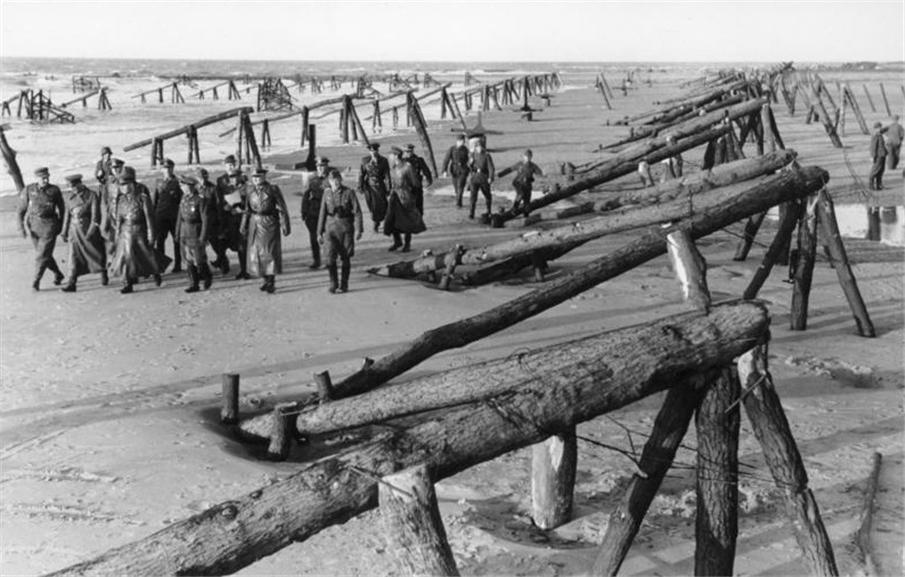 Erwin Rommel inspects a beach that is part of the Atlantic Wall - April 1944. In the photo we can also see a series of Hemmbalken.

For about six months, General Rommel devoted his enormous energy to the task of making the coastal defences between Cherbourg and the Somme impenetrable. In the process, he devoted as much attention as possible to Normandy. Driven by a strong sense of pessimism, he knew that the enemy had to be defeated on the beaches even if he could not control the Panzer forces. Perhaps he actually knew that there was very little chance of him succeeding; but it was the only chance he had.