The Transportation Plan was a bombing operation aimed at limiting all possible access routes to the invasion area of Normandy.

Bombing of a railway station somewhere in Europe.
Share this page
Related tags
BombingsbridgesPointblankrailwaysTransportation Plan
Print page
Save as bookmark

The Transportation Plan was an operation for strategic bombing of bridges, roads, tunnels, waterways, railways and railway stations mainly in Belgium, Nazi Germany and France with the aim of limiting all possible access routes to the invasion area of Normandy.

This was, in Eisenhower’s view, the greatest contribution to the success of Operation Overlord he could imagine! And Tedder could not agree more.

While arguments and counter-arguments were discussed at length throughout March 1944, both plans were actually carried out. Operation Pointblank, intended to support Operation Overlord, had been in progress for nine months. Tedder’s Transportation Plan had been partially in operation since the beginning of the year. So neither plan was entirely speculative. 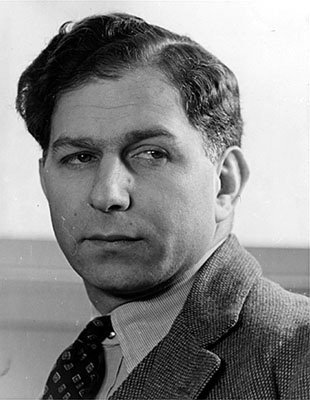 The original Transportation Plan as drawn up by the Allied Expeditionary Air Force Headquarters in January was based on an analysis by Professor Zuckerman. The plan envisaged a continuous ninety-day attack against 72 carefully selected targets, of which 39 were in Germany and 33 in France and Belgium. The plan, which constantly deleted targets, which was constantly subject to influence from civilian and military authorities, had been put into practice on a limited basis while heated debates continued.

The strategic views of General Spaatz, Air Chief Marshal Harris and their supporters were that it would be foolish and highly unwise to withdraw strength from the great bombing offensive just when it was beginning to show results.

Reports of initial results, by Air Reconnaissance, SHAEF G-2 and 21st Army Group Headquarters, justified the suspicion that these results were very poor. Even on May 9, 21st Army Group spoke of the Transportation Plan as ‘pinpricks on the rail links’. They did not have a good word to say about it. 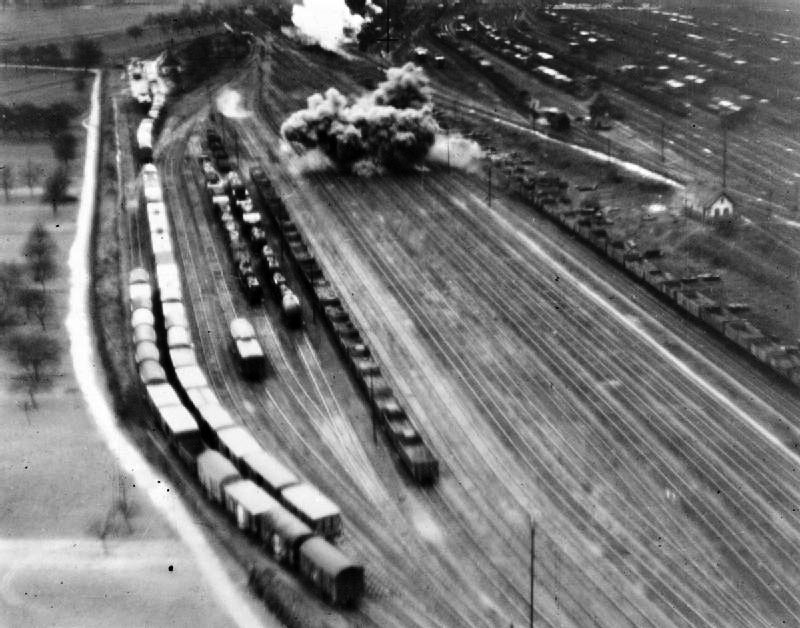 The enemy lines were close to total collapse. Hundreds of locomotives still ‘running’ were literally ‘on their last legs’, and the maintenance and repair shops had taken such a beating that repairing failed locomotives and trains was out of the question. Nevertheless, when the wrangling over the Transportation Plan had reached its climax, most of the facts seemed to prove Tedder wrong. But he remained steadfast in his belief that he was right and that only the Transportation Plan could be of immediate use to Operation Overlord. 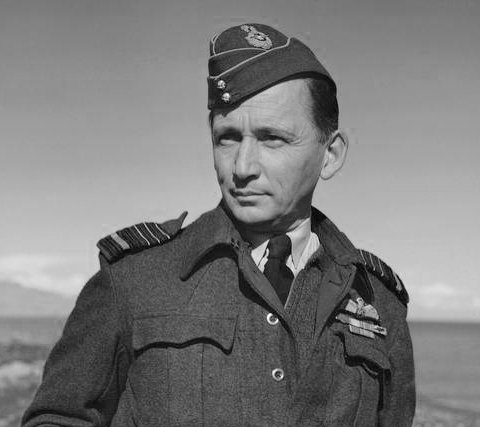 The difficulties were only too well known to Tedder. But even so, he felt, it would be worthwhile if enemy rail traffic was reduced by ten per cent by D-Day. He and the Commander-in-Chief were firmly convinced that only in this way could the Air Force make a direct contribution to Operation Overlord.

The discussions, the analyses accompanied by the continual changing of targets and the inclusion of roads and bridges in the list of objectives continued right up to the eve of D-Day, as did the damning criticisms and the mocking intelligence reports about the effect of the attacks on traffic and ‘the hatred which it engendered in the hearts of the French’. In both respects those reports were very far wrong.

Throughout all the disagreements and discussions about command, strategy and tactics, the Allied air forces kept busy with the many tasks set before them and continued their attacks with zeal. In the meantime, plans had to be made and exercises practised for the transport of three airborne divisions to Normandy in one go. Even General Spaatz continued to carry out heavy attacks, on the German oil industry, and one was sometimes tempted to wonder what all the fuss was about.

In March, a minor command crisis followed Leigh-Mallory’s establishment of an advance AEAF (Allied Expeditionary Air Force) headquarters commanded by Air Marshal Sir Arthur Coningham to operate in direct cooperation with ground forces. The objections of the bomber commanders were perhaps just a last gasp of their prejudices. On the eve of D-Day, Operation Pointblank had, in spite of everything, been carried out for ten months.

Until the end of March, the targets, in addition to the combined bombardment, were offensive:

In the final phase, Overlord and Neptune (the maritime aspect of the invasion) were given priority with five main tasks:

In the assault phase, the plan had the following objectives:

In addition to all these tasks, a continuous attack was carried out on the launching bases of flying bombs and on rocket bases in order to reverse the danger to the assembly areas, as well as to the ship concentrations and all other complicated preparations that were within the range of the secret weapons.

Craters after bombing the v2 launch base at Peenemünde.

To fulfil all these tasks, Air Marshal Leigh-Mallory had at his disposal some 5677 aircraft of the American 9th Air Force and the 2nd Tactical Air Force of the RAF. Of these, 3011 were light fighters and fighter-bombers and the rest transport planes, gliders, reconnaissance planes and AOA (Artillery Observation Aircraft).

The Results of Transportation Plan

Between 9 February and D-Day, these air forces, supported by the heavy bombers of the Combined Bomber Offensive, carried out attacks on 80 railway and road targets with 21,949 aircraft dropping 76,200 tons of bombs. 51 aircraft were lost, 25 were heavily damaged and 4 others were slightly damaged. On 6 March, Bomber Command carried out the first heavy attack on Trappes, about 35 km north of Paris, placing 190 hits, according to reports. The final result revealed the inadequacy of the existing intelligence reports, which in some ways tallied with the air marshal’s claims that they ‘thought’ they had achieved their objectives. By D-Day, the railway lines within 270 km of the battlefield had been rendered at least 75 per cent unusable, and the entire railway system of north-western Europe had been disrupted.

Early in May, tactical air forces opened a full-scale attack on trains, railway lines and bridges across the Seine beyond Paris. Heavy attacks were launched on Mantes-Gassi-court, Liège, Ghent, Kortrijk, Lille, Hasselt, Louvain, Boulogne, Orleans, Metz Mulhouse, Reims, Troyes and Charleroi. The pattern of bombing could just as easily have been interpreted as an attempt to isolate the Strait of Dover rather than Normandy, and thus gave no clear indication of the area chosen by the Allies for their landings. Extensive attacks on the road and rail bridges over the Loire were later planned and, finally, all the bridges giving access to the future battle area had been destroyed. 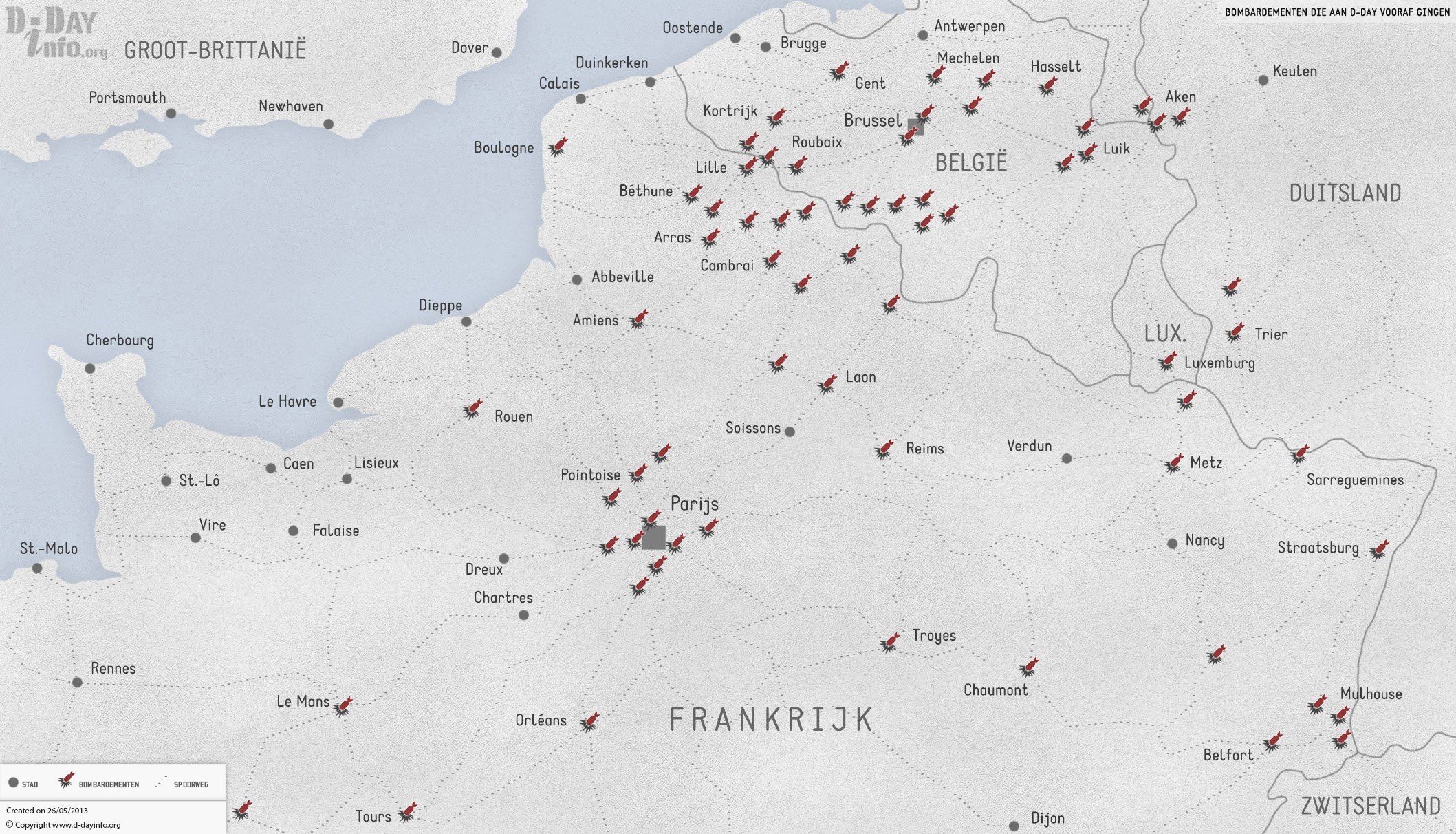 Attacks on radar installations, wireless telegraph and navigation stations paralysed enemy telegraph and telephone traffic, and made air and sea reconnaissance almost impossible. A total of 49 coastal batteries that covered the sea lanes were also attacked with some success. An important side effect of the offensive against the railways was that 18,000 men of the OT (Organisation Todt, a construction division of the German Wehrmacht) had to abandon urgent work on the Atlantic Wall and repair railway lines.